Cols and Passes of the British Isles by Graham Robb

7
10
Everything you ever wanted to know (and didn't know to ask) about cols in the British Isles
Weight:
435g
Contact:
www.penguin.co.uk

As the name suggests, Cols and Passes of the British Isles provides a comprehensive cataloguing and history of all such features in the British Isles, but the strict scientific definition of a col makes for some unexpected inclusions – and exclusions. It will be of interest to many outdoor enthusiasts, and has enough relevance to on- and off-road cyclists to be a worthwhile reference book.

The first thing you're likely to do when presented with a 'book of lists' like this is to look for an entry that you would recognise. So it was that I looked for some of the climbs in my area. Having failed to find any, I read part of author Graham Robb's highly informative introductory chapter and discovered that most people make the same mistake of associating the word 'col' with a strenuous climb – largely thanks to the role that cols play in the Tour de France.

We are told that a proper col simply 'provides the most efficient route from one valley to the next', whereas 'the Tour's publicity machine bestows the prestigious word 'col' on steep climbs that no animal or shepherd would ever have attempted.'

Robb works to the even more strict scientific and geological definition of a col, which means that, in addition, it has to be created by 'glaciations, seismic activity, or tectonic movement' – often helped along with some erosion.

There are several pages about the many words that ancient languages have used as part of the description for a col or pass (such as hause, swire, nick, bwlch, mam, lairig, and bealach), so having read that, I went to look up Bealach-na-bà – and initially failed to find it despite encountering several hundred other Bealachs. Again, back to the explanatory chapter to discover that all passes are grouped together after the cols, including this favourite of cyclists.

So why is the most famous bealach a pass and not a col? Well, it does not meet the strict scientific definition of a col, as it is 'a pass with a col 800 metres before the summit'. Fortunately a pass is 'a vague umbrella term applied not only to cols but also to a great variety of passages or crossings' so it could still be included.

There are a total of 105 such passes, as well as the 2,002 'proper' cols. You will see from the map that cols feature strongly in the west of the mainland, with other areas of the country doing without. The most densely populated part of the country contains only one, in South London, which Robb has called Sydenham Rise: 'no other col has a pedestrian crossing at its summit'. I don't expect it to become as popular as Box Hill. 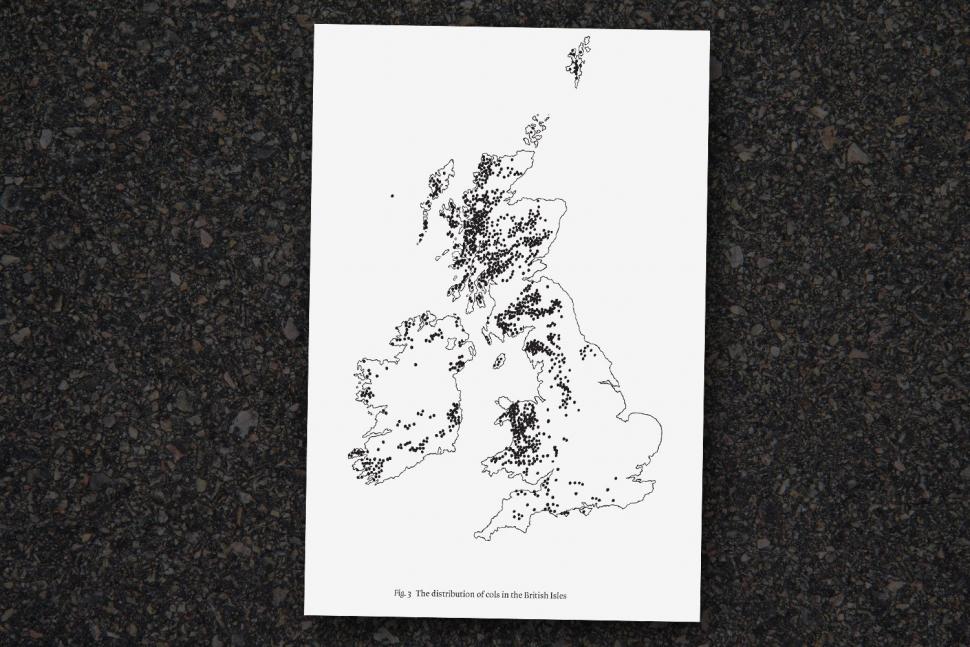 Watford Gap is often referred to in discussions about the north/south divide, but it has another claim to fame: it is no longer deemed to 'have the clear characteristics of a col and is therefore not included in the catalogue'. It is an example of our ever-changing landscape, even if the rate of change can be literally glacial.

It is worth pointing out that the Gap in question is near the village of Watford in Northamptonshire, rather than the town of Watford in Hertfordshire – which is considerably further south.

A lot of this book will be of interest to cyclists (especially those on mountain bikes), but it is not aimed at cyclists alone, nor is it written purely from a cyclist's perspective. Robb himself rides a bike, but would not claim to be a serious cyclist – and I don't think that he wants to be classed as such. Indeed he despairs at the antics of some cyclists, believing that 'discarded plastic tubes of energy gel, which litter the approaches to some of the famous French cols, are still a relatively rare sight in the British Isles'. Don't tell him that the littering seems to be getting worse...

This book aims to be 'the first complete guide to the cols and passes of the British Isles', but Robb recognises that 'total accuracy is a mirage, and any corrections will be gratefully and solemnly received'.

Of greatest relevance to road cyclists are the 429 cols (and 84 passes) that are on roads, ranging from motorways (perhaps of less relevance!) down to unclassified, which are helpfully highlighted in the 128 pages of tables.

A book like this might give you a bit of inspiration to ride over some of the cols, but it does not have to be arduous: the easiest rises only 12 metres from sea level, at an average gradient of 3% (Tayvallich on Jura).

If you need more incentive, Robb helpfully lists the seven cols with a cafe or pub at the top – or even a mobile catering van.

Other cols sound less appealing, such as the one under a motorway bridge – or are rather inconveniently located, such as the three on the St Kilda archipelago.

Robb sets a competition by dedicating the book to 'the first person to cross all 2,002 cols of the British Isles (without the aid of a car)' – because Robb himself has not quite managed it yet. But there are no prizes for conquering the passes.

Make and model: Cols and Passes of the British Isles by Graham Robb

Penguin says: "The one and only guide to every col and pass in the British Isles, for cyclists, walkers and armchair travellers

A col is the lowest point on the saddle between two mountains. Graham Robb has spent years uncovering and cataloguing the 2,002 cols and 105 passes scattered across the British Isles."

Some of these obscure and magical sites are virgin cols that have never been crossed. Dozens were lost by the Ordnance Survey and are recorded only in ballads or monastic charters. The eleven cols of Hadrian's Wall are practically unknown and have never been properly identified.

These under-appreciated slices of natural beauty provide a new way of looking at British history, and a challenge for cyclists and walkers.

Title: Cols and Passes of the British Isles

It does exactly what it promises, with no frills.

Would you consider buying the product? Yes, as a reference book when planning trips.

It's a comprehensive armchair guide, both informative and inspiring, with some surprises. Not all the information is relevant for road cyclists, but those who ride off-road and enjoy walking as well will find it useful.

Cols and Passes of the British Isles by Graham Robb