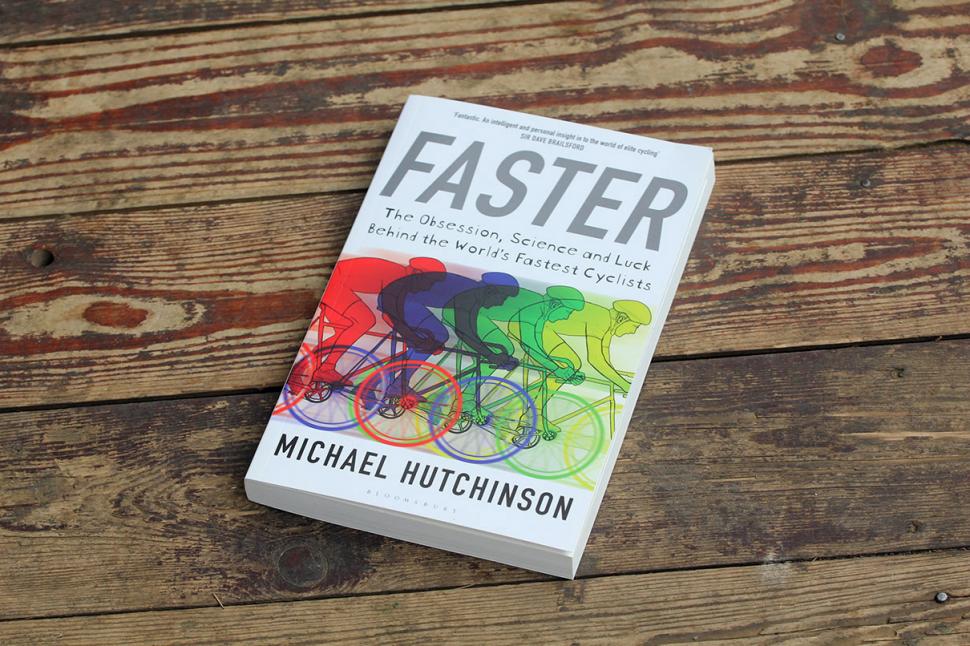 Faster - The Obsession, Science and Luck Behind the World's Fastest Cyclists

9
10
Well researched and delivered perfectly; definitely one for the permanent collection
Weight:
342g
Contact:
www.bloomsbury.com
How we test

If you've ever bought a sports science book or read one of those interminable magazine articles on how to lose fat, build muscle, increase your wattage or whether you should eat goji berries after your ride or before, you'd be forgiven for clocking the title of Michael Hutchinson's latest book and slipping straight into science blurb overload.

Don't worry. This is Dr Hutch, not Doctor Gillian McKeith and Faster-The Obsession, Science And Luck Behind The World's Fastest Cyclists has to be the best explanation of the science of cycling I have yet seen. Dr Hutch is no nonsense from the start and as national time trial champ he knows what he's talking about.

Competitive cycling is actually pretty simple. 'It is a sport that depends on how hard you can turn the pedals. This is the absolute basic. However obvious it might appear. Everyone involved in cycling forgets it at some point.' If the nonsense talked on many a club ride is anything to go by there are plenty of souls who didn't learn it in the first place.

Ah, but it's those little details and nuggets of performance information and rumour that fuel the gullible mind. Over seven chapters Hutchinson dissects every component of performance, from innate skill, through strength, nutrition, bike technology, training, mind set, and genetics, to ask: how can I go faster?

Along the way Hutchinson explains what he's learnt as a competitor, talks to plenty of pro riders and the staff around them about the science, the pseudo science and the plain mumbo jumbo myths of training to race and win.

If you're looking for the holy grail - an exhaustive guide to becoming a faster cyclist or the definitive training bible - Faster isn't it. Hutchinson deals with realities not beliefs. It's a list of the incredible diversity of variables that may or may not affect performance and a discussion of how difficult it is to say that what works for one athlete will work for another.

You may have certain innate physical gifts, but they could be undermined by another physical condition. For instance Hutchinson's VO2 max (the amount of oxygen he can use in a minute) is huge: 50% more than a good club rider. But as his rate of blood lactate build up is also high he could never translate that capacity for fuel use into horse power for long sustained effort at the higher pace needed to bring results amongst the world's very best.

In terms of marginal gains, even Team Sky spreadsheets can't tell them what percentage of one percent drinking healthy fresh juice actually delivers to better rider performance. They do know that getting riders to stick to the programme is essential if you want to at least try to crunch numbers accurately.

Nigel Mitchell, Team Sky's nutrition specialist, found he could talk hydration and protein recovery drinks all he wanted - but as the riders were just snaffling the can of Coke in the post race recovery bags like kids at a birthday party and leaving the good stuff, Mitchell had to ban all soft drinks. With the team chef making 20 litres of vegetable juice a day, Mitchell is pretty succinct: "We're not pissing about, investing in the things we do, and then handing out Coke," he says. It's not some Harpic flavoured fancy powder for hydration either. If you want to drink what Team Sky drink of an evening, then diluted pineapple juice is the curent favourite. Freshly squeezed by a Swede mind you. Or even from swedes in some cases. There's plenty of ventilation on the Team Sky bus.

In the section on technology, 'Free Speed', Hutchinson recounts the problem of aerodynamics versus structural integrity under pressure and reminds us of the basic problem of early plastic bikes. The sound of his beloved Lotus bike changed from the hollow rumble of carbon fibre to 'an odd buzzing' as he plugged away at a time trial. 'I noticed, with some alarm, that I could see the road surface flashing past not only on either side of the bike, but through the middle as well.' The two halves of the frame had parted company and to slam on the brakes would have been a bad idea.

If numbers, percentages and acronyms make your brain ache please don't worry. Faster is a very readable book. Dropping in the odd quote doesn't really convey the richness and intelligence of Hutchinson's achievement. His mastery of his subject and the Dr Hutch dry wit have produce kind of a cycle training version of Bill Bryson's guide to science A Short History of Nearly Everything and it deserves the same kind of success among cyclists. It's certainly a must for any prospective coach and a fair few practising coaches too.

There will still be a few desperate souls hoping - like John Lennon did when he took a helicopter trip with the Maharishi - that Faster will slip them 'the answer'. The answer is slightly alarming. The last chapter is a startling discussion on genetics. Breeding top athletes together is possible (something the East Germans experimented with apparently) and cherry picking genes is just over the horizon, but The Boys from Brazil scenario is unrealistic - you'd be looking at the the 2032 Olympic games to bear fruit on that one.

Unfortunately the possibilities of genetic tweaks that expand the heart and improve other performance organs are very real and may be the new EPO in future years. It's no longer the oxygen level of the blood but its physiological delivery speed that's being looked at.

Putting the syringe aside, along with the variables of road racing tactics and track racing psychology, Doctor Hutch leaves you with the basic truth of sport - why we keep watching it and training for it. The truth is that most of the time a genetically gifted person who trains hard will out perform a genetically average person who trains hard. But only most of the time.

Well researched and delivered perfectly; definitely one for the permanent collection.

Make and model: Michael Hutchinson Faster - The Obsession, Science and Luck Behind the World's Fastest Cyclists

The kind of book anyone riding a bike and trying to get better at it will want to buy. It might not help but at least it will stop you reading some of the cobblers out there.