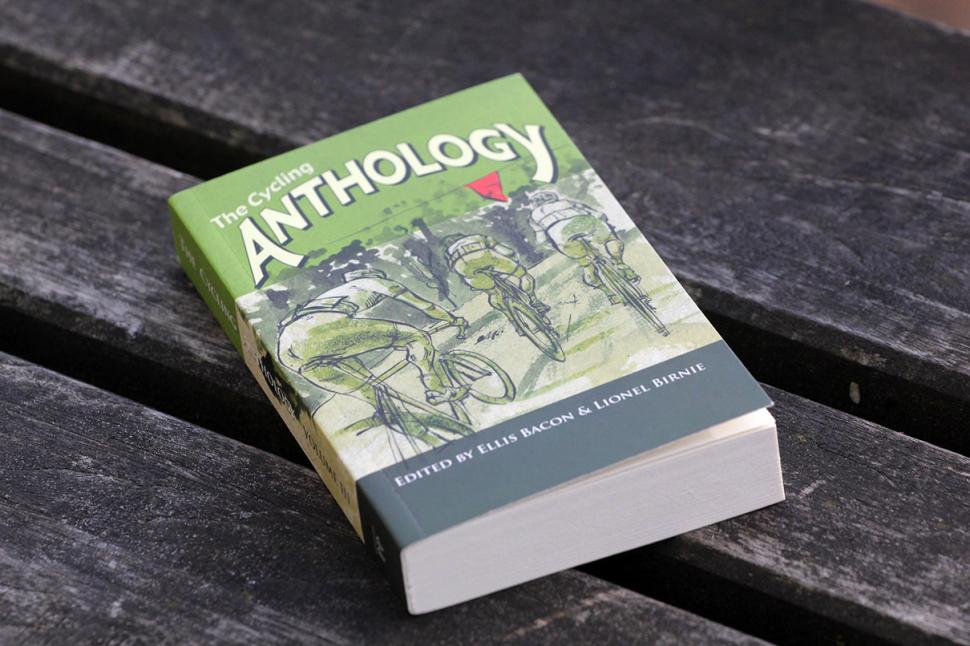 It's strange to realise that it's been only 12 months since the first Cycling Anthology came out and we're already on Volume 3. The recipe remains unchanged: take 12 to 14 writers who've earned the extra space to expound on pro cycling stories at greater length than they'd be given in the broadsheets, and let them loose on something that takes their fancy.

Some contributions are quite short, others are over 20 pages long with the welcome addition of photographs. The end result is again a collection of strong, considered pieces that expand on pro circuit news stories that you've perhaps wanted to read more about - or stories that cover aspects of racing and the industry you've never considered before.

Neal Rogers looks at the three Garmin riders Christian Vande Velde, David Zabriskie and Tom Danielson who ran the gauntlet of doping stigma twice. They quietly quit performance enhancing drugs to join Garmin and struggle uncompetitively against those still using. They then admitted transgressions from their time before Garmin, served a six month ban each and returned to a mixed reception within the pro peloton: ostracised by half for being ex-dopers and the other half seemingly for breaking the code.

Christian Vande Velde sums it up: 'We were the ones who took the first step, and were getting our asses kicked by people who hadn't ... and then we were the ones hanging on the cross again.'

Rogers uses the example to look at the difference between stopping doping before you are forced to, then getting ostracised for trying to ride clean, versus getting caught doping after years of denial and being ejected from the sport with no chance of redemption. Of course the bitterest pill of recent times for many was the sight of an unapologetic Alexandre Vinokourov crossing the line in London for the gold medal. Cycling regulations are getting better but the residual fall out of years of hubris at the UCI and the IOC will continue for a while yet.

In 'Two Bob Rockets' Kenny Pride looks at the implications for the sheer toughness of the sport at the highest level of a new generation of clean riders and surmises that riders with no pharmaceutical help will find it difficult to dominate. Single riders winning grand tours for years in succession may well be a thing of the past.

'I may be wrong but I suspect most professional riders will accept a shorter career if they know that they are losing to or beating a clean field of riders,' says Klaus Bellon Gaitan in 'Out of Nowhere', a remark shared by two TV reporters when Quintana finally reached senior form. He questions the ongoing default position of skepticism from commentators and fans alike, and is disappointed by the toxicity of constantly doubting every race performance. He comes to the conclusion that fans need to invert to the old adage and instead develop 'the ability to suspend disbelief'.

In 'Glass Half Empty', Jeremy Whittle, tackles the ongoing PR problems of Team Sky, not just the dismissal of previous coaches but the struggle to be transparent about doping in a world where even full access is seen as some kind of cunning spin. Whittle isn't particularly impressed with David Walsh's exclusive access to Sky.

It isn't his colleague riding around in Jaguars that annoys Whittle but the sense that being embedded within a team is still a compromise even for a journalist of Walsh's skills. Whittle suggests that allowing one journalist to buddy up with Sir Dave for a full Tour wasn't a clever decision and that it would have made more sense, in the quest for the cynics' acceptance, to have a pair of binoculars on Team Sky rather than the single eye of the telescope, and it was yet another PR mistake by Sky not to realise that.

Don't worry; there is some sort of light relief from doping stories to be had elsewhere. Rupert Guinness in 'On the Buses' laments the long gone days when you could interview riders lounging on the bonnets of team car rather than the riders spotting you through one way glass from their air-conditioned bolt holes and sending a PR lackey out to fob you off.

In 'The Indivisible Man' Ned Boulting expands on a previous pre-Tour Rouleur magazine interview with Chris Froome to admit that, even with full access on the 2013 Tour, he still hasn't managed to crack through the amiable Froome persona to the personality underneath, and this impenetrable wall of niceness goes some way to explain why Froome's often exciting Tour win seemed so low key. The bottom line appears to be that Froome's aggressive, explosive racing is unfortunately balanced by such an amiable and patient nature that whilst the respect for him is solid, affection for him as a 'character' is zero.

After three years of Wiggins' antics - banging his head on locked team buses, telling the naysayers that they're to see him next tuesday and discovering that most of the press will give up and go away if you dawdle in doping control long enough - Froome should have been a godsend to the press. But with no emotional fireworks and nothing but patience on offer, Froome leaves a lot to be desired in terms of interesting copy. Part of his training programme for next summer should be to perhaps carry a small dog around, slam a few car doors on microphones and develop a haughty silence for some of the more inane questions. A bit of storming to his trailer to go with his storming up climbs is what the press and public want to see.

It's ever been the case that emotion sells and Froome perhaps needs to play-act some human irritation in 2014 to be seen as human at all. Defending the title might not need play-acting at all, even for Froome.

What else? Anthony Tan looks back at Australia's sports programme in the 1970s and its effects on the crop of Australian riders in the pro peloton today, and Edward Pickering brings the same kind of detailed consideration to his list of 13 ingredients of what makes a good race as he did to the battle for the hour record in 'The Race Against Time'.

Lionel Birnie's looks at the last 10 years of the Tour of Britain and in 'You Are The Pro' Ellis Bacon produces one of those 'choose your own adventure' stories so beloved of the late 1970s. I seem to remember I had a picture one with pirates and sharks. You are the pro rider with the freedom to choose your races of the season and what you do in the race you choose. Your choices either succeed and extend your contract. You lick your wounds and get another chance next season, or you crash and burn. I was skeptical at first but actually it works very well. Before you ask, there are no PED options. This isn't Strava.

Richard Moore produces a long overdue piece on women's cycling and its pioneers, dealing specifically with the 1984 women's Tour de France and it's winner Marianne Martin who got $1,000 in prize money and 'a teeny tiny story' in her local newspaper for her troubles. Great to see the fantastic Betsy King credited. She likened competing in the 560km Bordeaux-Paris to 'getting your wisdom teeth out'. She did it to prove that women had the endurance to race long distances and proved her point by coming in only 10 minutes down on the winner Hubert Linard.

Women's cycling is unfortunately still begging to prove that it's a viable sponsor's sport for television. With the Women's Tour of Britain announced for 2014 and talk of yet another resurrection of the Women's Tour de France it's still revealing that Moore can't end his piece as I'm sure he would have liked to, with a firm belief in a stable and growing women's professional circuit. We're hearing the talk but until the sponsors see the walk it could still go either way. The UK Women's Tour will be a bigger deal than the men's in 2014. It will have to be if women's cycling, and all the cultural and social benefits more women on bikes will bring to society will be firmly established.

All in all The Cycling Anthology team have done the double. They've managed to pull off the 'difficult second album' with aplomb and move on to a third which is as rich as the previous two. If you are interested in reading the best there is in cycle racing stories then clear a space on your bookshelf for all three volumes and pray for the arrival of the fourth.