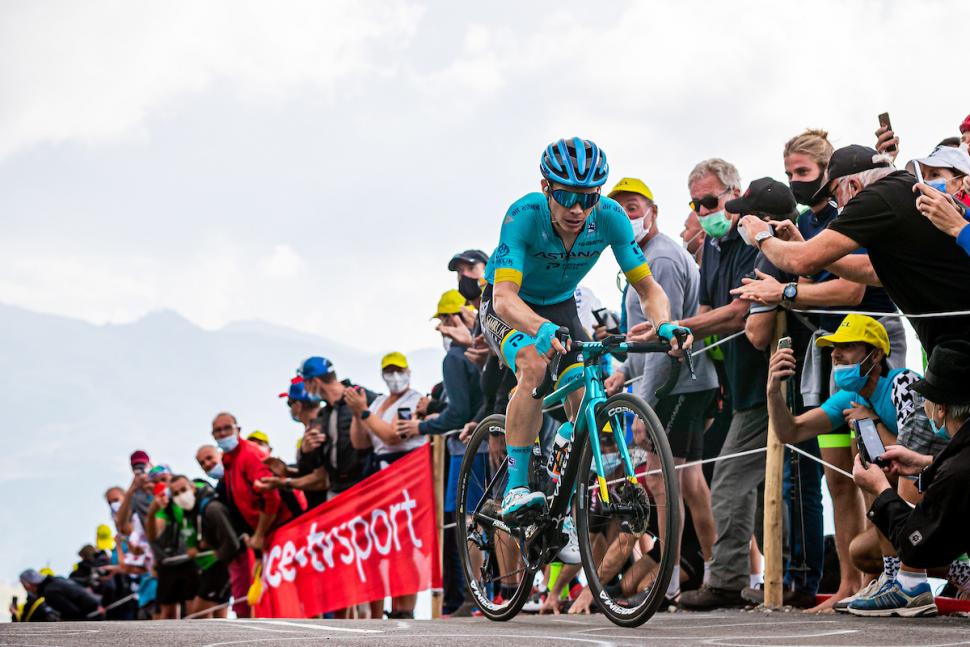 Miguel Angel Lopez has won the Queen Stage of the Tour de France on the Col de la Loze today, the third highest mountain to have hosted a stage finish of the race, with the Astana rider moving into third place overall.

Second place on the stage went to overall leader Primoz Roglic of Jumbo-Visma, who with time bonuses factored in picked up around a quarter of a minute on fellow Slovenian, Tadej Pogacar, who remains in second place on GC and moves into the leadership of the mountains classification.

On a day that also included the Category 1 climb of the Col de la Madeleine, there was a battle to get into the break - Lotto-Soudal's Thomas De Gendt even getting away solo at one point early on in the 170km stage from Grenoble.

Eventually, five riders established themselves at the front of the race including Richard Carapaz of Ineos Grenadiers, winner of yesterday's combativity award, and the Ecuadorian was the last member of the break to be swept up today.

He had an advantage of around 45 seconds when, with 4km remaining of the final climb, David de la Cruz came to the front of the GC group to set the pace for his team-mate Pogacar.

The move distanced Mikel Landa of Bahrain-McLaren, whose team had been setting the pace since the early slopes of the Col de la Madeleine, as well as EF Pro Cycling's Rigoberto Uran, third this morning.

With Sepp Kuss of Jumbo-Visma now taking up the pace for yellow jersey Roglic, the moves in the GC group meant that Carapaz's solo effort was doomed to failure and the Ineos Grenadiers rider was caught with 3km to go.

Kuss now attacked, Astana's Miguel Angel Lopez going with him, and behind there was a group of just three men - Roglic, Pogacar and Richie Porte, who had rejoined them after briefly being dropped.

Inside the final 2km of the climb, Kuss dropped away, leaving Lopez alone in front on his own, while a little further back down the mountain Roglic had dropped Pogacar.

Digging deep, the UAE Team Emirates youngster, winner of two stages already at this year's race, tried to get back across to his compatriot, but found it impossible to bridge the gap and now lies 57 seconds behind Roglic.

I had this stage in my mind, I was focused on it and tried to come to this day in a right form. I knew that this kind of climb over 2,000 metres above sea level would suit me really well.

Big and long climbs like Col de la Loze really suit me because it is similar to the climbs I have at home in Colombia. I feel good on the altitude and today I wanted to do something.

Together with the team we did a good plan before the stage and we tried to follow it from start to finish. I had a great support of my team during the whole day and also in the final Omar Fraile did an excellent job for me. He was phenomenal today!

Coming into the last climb I felt quite well, and my legs worked perfectly. Indeed, it was a super hard climb, but I managed to stay in front in the leading group until the decisive kilometres.

I knew this climb very well, because we did a reconnaissance with the team earlier in August, so I knew what to expect and where to try to attack.

It was super hard in the final and I had the longest two kilometres of my life, but I continued pushing hard until the finish line.

I saw some Colombian fans along the road, they were cheering for me and it also gave me some additional motivation to keep on pushing hard. I am super happy with my win, I was dreaming about it and now I’ve got it. It is so beautiful!

It was a very good day for us. I am very happy with what we have shown today and also with the time gained. Of course I would have liked to win the stage, but Lopez was a bit too strong.

It was a very tough stage with a very steep final climb. When I see an opportunity, I attack, and so I did. Most importantly, apart from Lopez, I have gained time on my competitors.

However, the Tour is not over yet and there are still three tough days to come. We have to stay focused and be ready for the attacks that we expect to come.

The team was very strong. I cannot thank my teammates enough. Sepp [Kuss] in particular was impressive today.

I lost a few seconds on what was a really hard climb. I gave my best, the team gave their best and we got third place on the day to show for it.

Tomorrow we will be ready for another very tough stage and then there will also be the time trial on Saturday, the Tour is not over and anything can still happen.