Government-owned Highways England has been accused of using emergency powers to demolish or infill more than 100 disused railway bridges, tunnels and viaducts that campaigners say could be given a new lease of life as part of cycle routes, reopened railways or extensions to existing heritage railway lines.

HRE Group, an alliance of engineers, cycling campaigners and greenways developers, says that Highways England, which manages the Historical Railways Estate on behalf of the Department for Transport (DfT), plans to infill or demolish some 134 bridges across Great Britain, many dating from the Victorian period and carrying or spanning railways axed in the Beeching cuts in the 1960s.

According to the campaign group, Highways England says that the bridges concerned are among 200 to have failed an engineering assessment to carry 44-tonne lorries and, in the absence of weight restrictions, will have to be infilled or demolished on “urgent safety grounds” to “prevent an emergency arising.”

But HRE Group says that 19th Century railway bridges, which make up the majority of the bridges at risk, are only required to carry 24 tonnes, and that weight restrictions are only put in place where the anticipated traffic loading is greater than the structure’s capacity. It also points out that most of bridges are in good condition, and many of them have narrow lanes so cannot be used by lorries.

It adds that plans would block the routes of six proposed cycle paths – including one near Newbury, Berkshire that is funded by Highways England itself, with others located in Cornwall, Somerset, West Yorkshire and Northumberland, and has produced a map showing some of the active travel and heritage railway routes potentially affected. 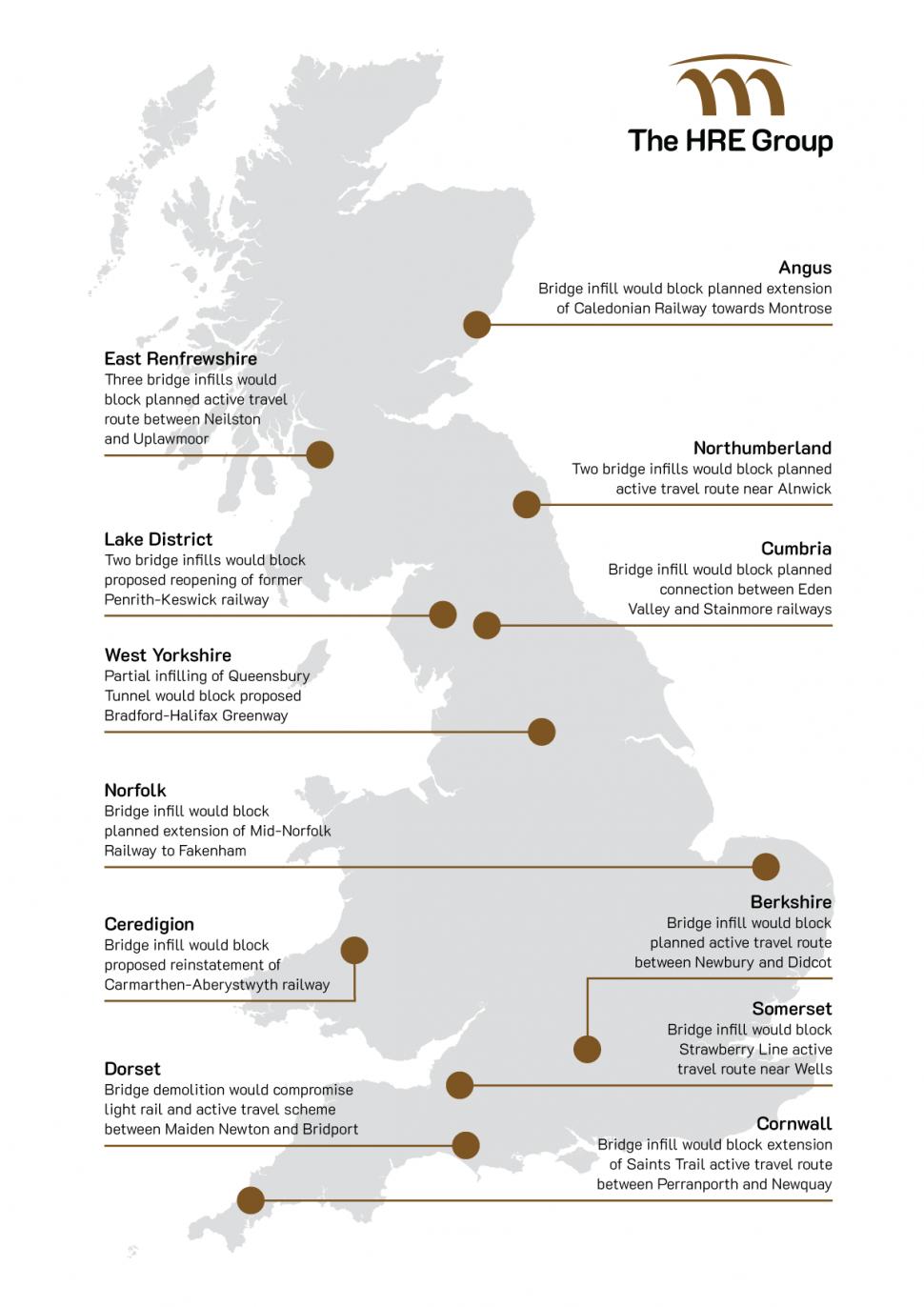 In recent decades, a number of former railway lines have been turned into active travel routes, examples including the Bristol & Bath Railway Path, the Ystwyth Trail in Ceredigion and the Deeside Way in Aberdeenshire, as well as the Camel Trail in Cornwall, which includes the Little Petherick Bridge near Padstow, pictured above.

Last month, when HRE Group first published a list of at-risk bridges, a spokesperson from Highways England, quoted on the website Newbury Today, said: “To maintain the safety of communities living near to Historic Railway Estate structures, and the drivers who use the roads that cross them, we are planning to infill 115 bridges, one of which is Hackney Bottom railway bridge.

“Local highway authorities have responsibility for applying weight or traffic restrictions or closing the road, but haven't despite the bridge having fractures increasing in size. Therefore, our planned infilling is the safest and most appropriate option and will maintain access across the structure.

“We contact all local authorities affected to advise them of our plans and to see if they have any use for the structures.”

But HRE Group, says that Highways England is using its emergency powers to circumvent planning consent which would ordinarily need to be secured to carry out infilling or demolition works, and that in 33 of 63 cases it has examined the disused railways the bridges cross are safeguarded from development under the relevant councils’ local plans, meaning that planning permission would be refused.

Matt Skidmore of HRE Group said: “The Permitted Development powers are clearly intended for situations where there is an immediate threat of an emergency, but Highways England is seeking to exploit them for routine asset management purposes.

“Some of the infilling projects are not expected to start until 2025; that’s nobody’s definition of an impending emergency.

“There are no legitimate engineering grounds for what they’re doing so these powers are being used to overcome the challenges that might otherwise arise through the planning regime,” he added.

“This is an assault both on democratic process and our railway heritage, preventing these historic structures from fulfilling a useful future role.”

The proposed demolition of a bridge in Dorset (pictured below) could add £750,000 in costs to a community project to develop a new light railway and active travel route linking Maiden Newton, which is on the national rail network, to Bridport and West Bay, says HRE Group. 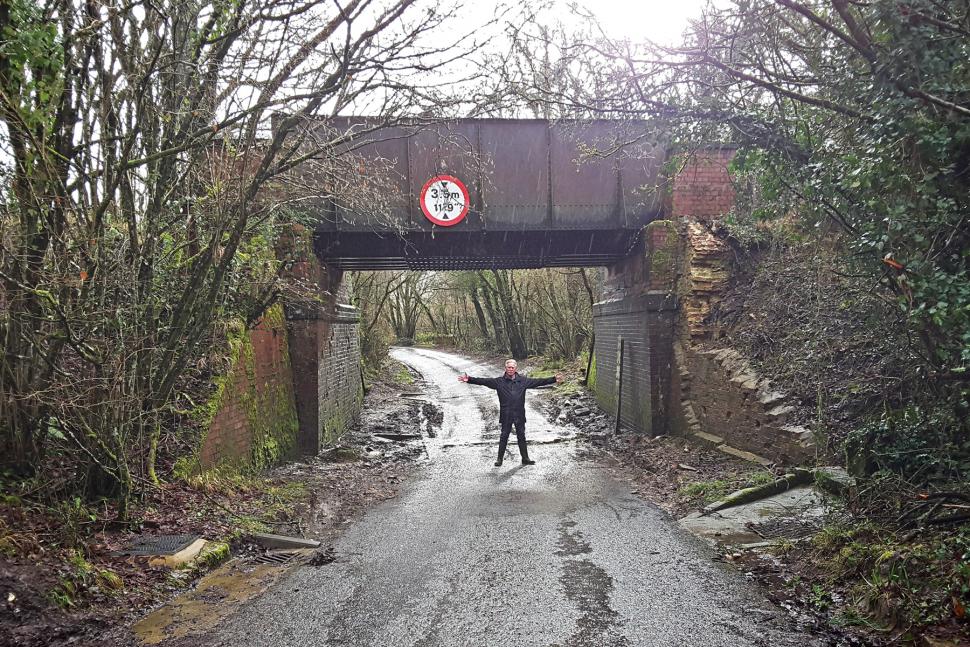 Nigel Ewens, director of Jurassic Coast Railways which is leading the project, said: “The cost of building a completely new bridge to modern standards would be significantly higher than repairing the existing Victorian structure which benefits from grandfather rights. So retention is crucial.

“At a time when we’re increasingly recognising the value of green infrastructure, it’s absurd that unaccountable officials are conspiring to put beyond use assets that can be repurposed to enhance biodiversity, wellbeing, community connectivity and reduce our environmental footprint. Where’s the joined-up long-term thinking?

“The use of Permitted Development powers to drive through the desecration of these national assets without public scrutiny is a disreputable act and those in a position of influence need to act quickly to ensure a full and proper appraisal of these structures’ true value is undertaken before it is too late,” he added. “This is a call to arms.”

HRE has written to the House of Commons Transport Select Committee calling for an investigation of Highways England’s management of the Historical Railways Estate, with more than 7,500 people so far having signed a petition calling for the structures to be safeguarded.