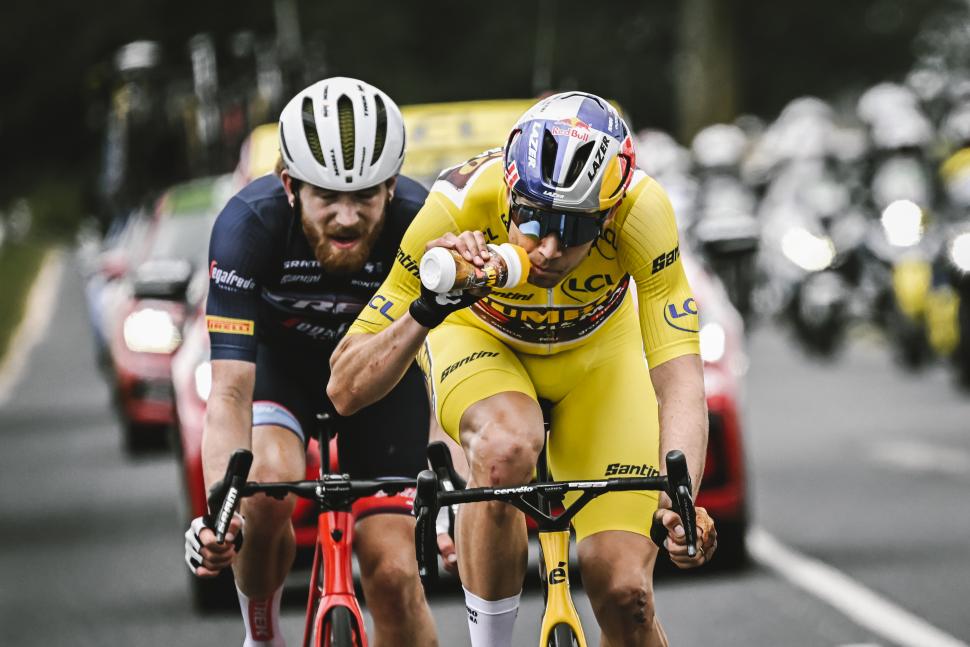 “He's playing with our balls... he's taking the piss!”: Tom Pidcock sums up how we all feel about Wout van Aert

The Belgian superstar may have lost his yellow jersey today in Longwy, but he once again underlined why he’s one of the best, and most exciting, bike racers on the planet
by Ryan Mallon

Wout van Aert is the best and most exciting pro cyclist in the world. Okay, Annemiek van Vleuten and a certain Tadej Pogačar may argue against that assertion, but one thing is clear: Van Aert is at the forefront of a generation redefining bike racing.

The Belgian’s results so far at this year’s Tour de France speak for themselves: second, second, second, first, a relatively lowly 16th on the cobbles to Arenberg, and today’s 103rd in Longwy, where he also lost his hitherto formidable grip on the yellow jersey.

But the results, as impressive and consistent as they are, only tell one side of the story. Ironically, yesterday’s and today’s stages – the statistical nadir of Van Aert’s Tour so far – arguably say more about what makes the Jumbo-Visma rider one of the defining riders of his generation than the run of top twos that kickstarted his race.

Of course, Van Aert’s stage win in Calais on Tuesday was one for the ages, a rare display of power and panache that made the rest of the peloton look like awe-struck juniors (and saw the 27-year-old become the first rider to win a non-time trial or non-mountainous stage of the Tour in the yellow jersey since Fabian Cancellara in 2007). 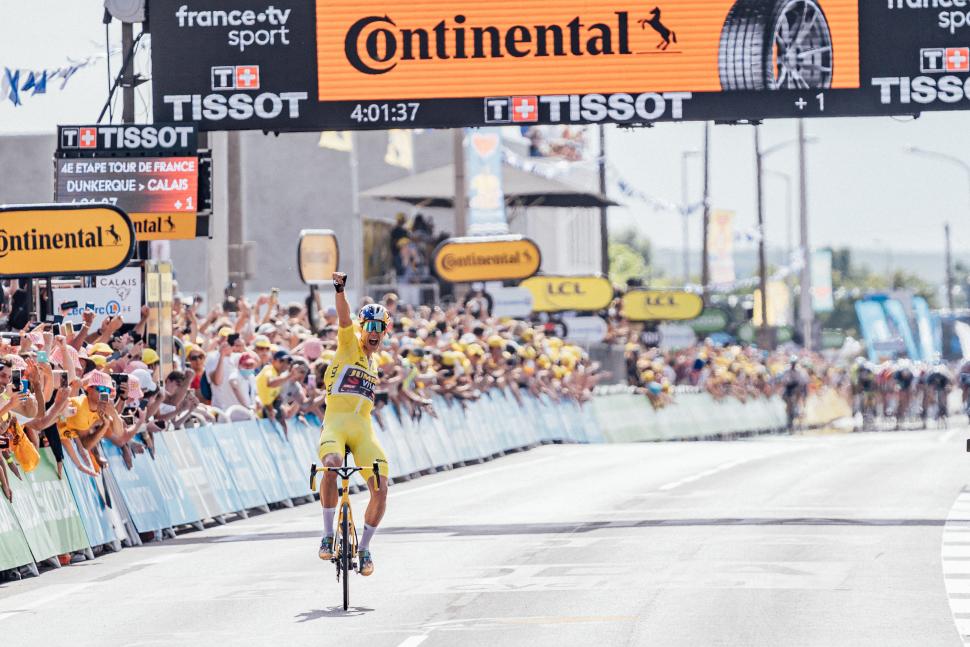 Yesterday, he once again emphasised his value to his teammates, recovering from an early crash to calmly steer the panicked and seemingly sinking Jumbo-Visma ship to safety amidst the wreckage of the cobbles, keeping Jonas Vingegaard – if not quite Primož Roglič – in the GC race.

Today’s stage six to Longwy may go down as one of Van Aert’s finest moments, one that epitomises his unique abilities as a bike racer. For seemingly no other reason than a sheer willingness to race hard (and perhaps to give his wounded teammates an easier day sitting in the wheels), the former Belgian champion relentlessly drove on move after move, right from the start of the 220km stage, the longest of the 2022 Tour. 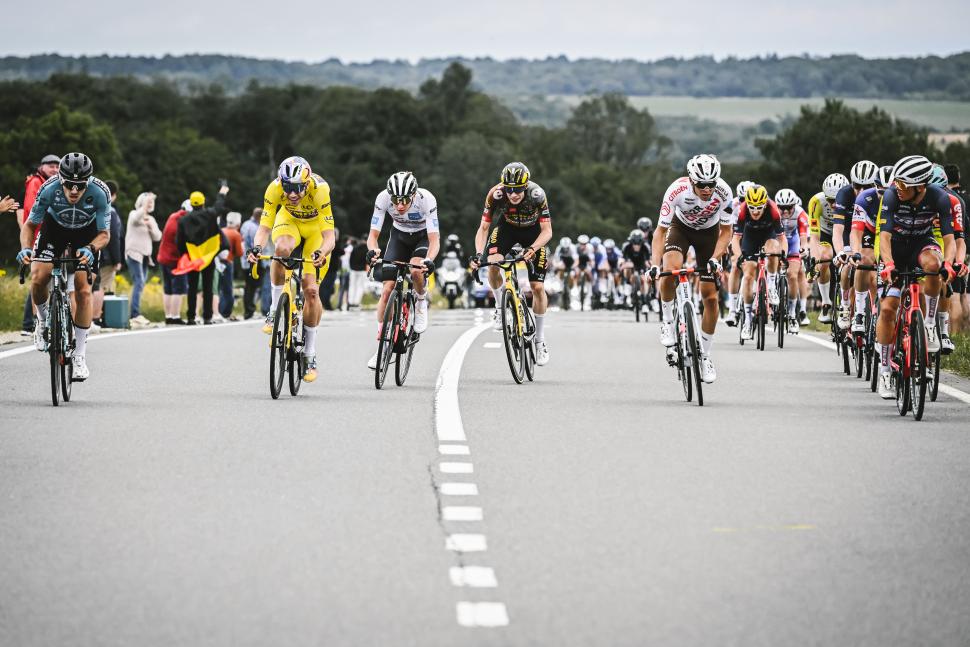 For around 80 kilometres of the blisteringly fast day – which ended up averaging a mind-boggling 49.4kph – Van Aert was constantly at or around the front, increasing the pace, infiltrating moves.

And then he was gone; up the road with Jakob Fuglsang and Quinn Simmons in a three-man breakaway.

With 30 kilometres to go, Van Aert was alone. The yellow jersey, solo, holding off a fast-charging peloton: a scenario that only a few years ago seemed confined to the hyperbolic scribblings of a cycling journalist from the 1950s.

That he was eventually caught 11 kilometres from the line, and ended up relinquishing the overall lead, didn’t matter. Van Aert was ripping up the rule book, redefining what it means to lead the Tour de France. 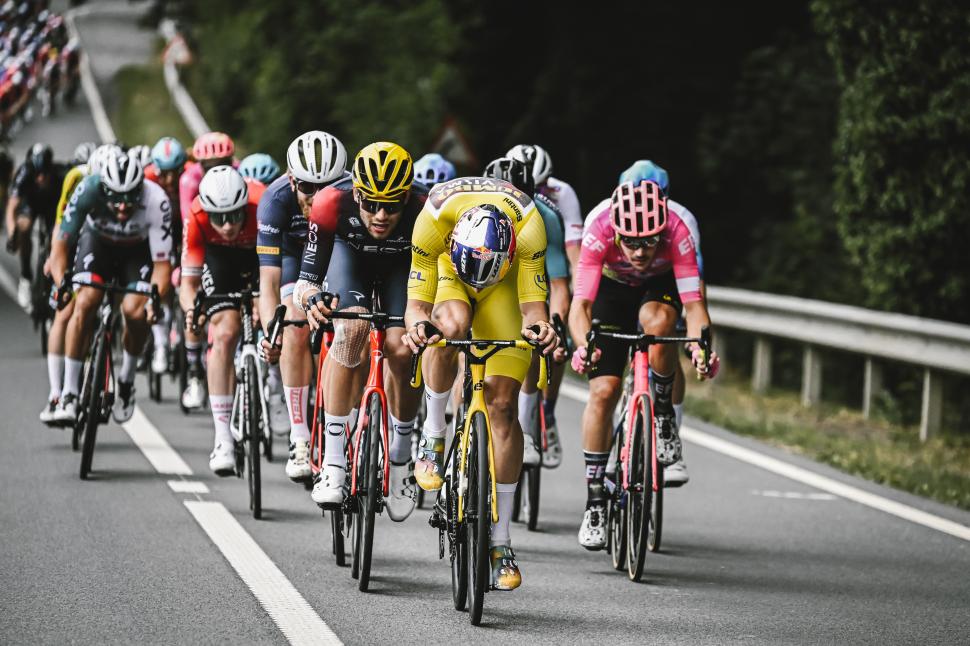 British rider Tom Pidcock, who finished fourth on the uphill drag to Longwy, was one of the many onlookers left scratching their heads at the Belgian’s antics.

When asked by GCN’s Bernie Eisel for his reaction to his fellow cyclocross star’s ride, Pidcock laughed: “He’s playing with our balls, isn’t he? I don’t know what to say to be honest. He’s taking the piss, isn’t he?”

In a later interview with ITV’s Daniel Friebe, the 22-year-old Tour debutante elaborated on his mixed, and rather confused, feelings towards Van Aert’s tactics.

The Ineos Grenadiers rider is right. Van Aert could have waited. His result on the stage would almost certainly have been improved if he had.

But that’s not quite the point with Van Aert. Just like his old rival Mathieu van der Poel (currently experiencing the first underwhelming spell of his road career so far at the Tour), it’s the manner in which Van Aert rides, and then wins, that matters.

Van Aert and Van der Poel have been the dominant classics riders of this era of the sport, but their record in the biggest one-day races, the monuments, is largely defined by near misses. While Van der Poel leads the monuments victory tally two-one over the Belgian, since 2018 both riders have finished in the top ten of the five major classics a combined 20 times (ten each, incidentally). But they are very rarely not in the fray – the pair’s lowest monument result is Van Aert’s 22nd at the 2019 Paris-Roubaix. Appalling, I know.

Since turning their attention to the road at the end of the last decade, then, Van Aert and Van der Poel have been omnipresent at the front of cycling’s showpiece events, and in doing so have reshaped how the sport’s biggest names race their bikes. 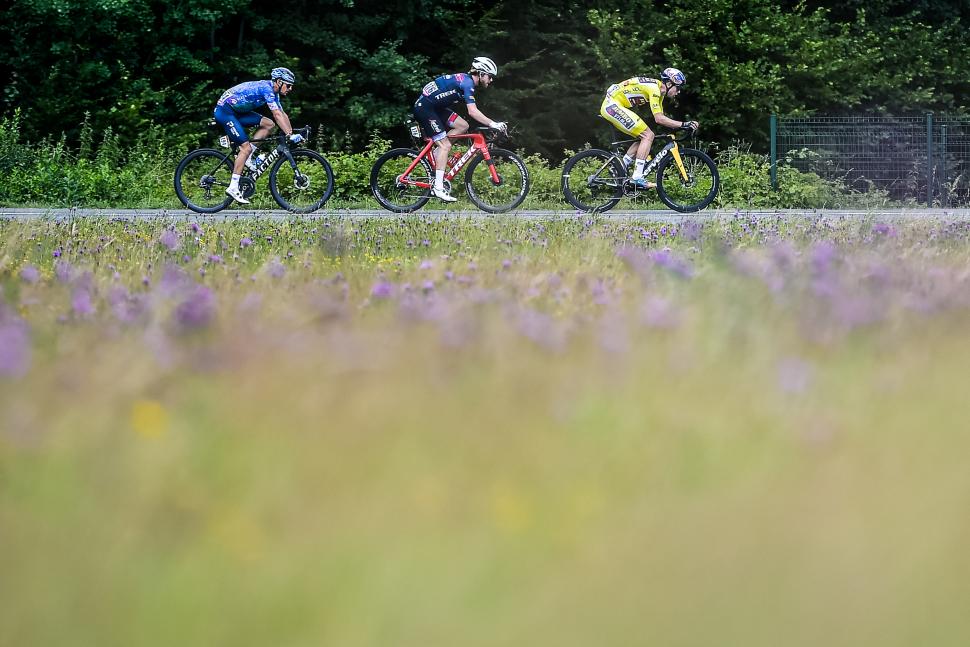 This way of racing has certainly rubbed off on – and arguably played into the hands of – this generation’s great all-rounder Tadej Pogačar, a gifted climber and excellent time triallist who, after yesterday gliding across the cobbles of northern France, today put several bike lengths into Michael Matthews (a specialist uphill sprinter) on an uphill sprint. He may be dominant, but you can’t say he’s not entertaining.

It’s fair to also say that cycling, particularly grand tour racing, experienced a period of ennui in the mid-2010s. The Sky train was out in force, and Tours were decided with the briefest of skirmishes.

While Primož Roglič appeared the likely heir to this effective, if tedious, tactical style, the emergence of Pogačar – with the cyclocross stars, Julian Alaphilippe, and even Roglič himself these days in tow – ushered in a new, freewheeling era of bike racing. An era epitomised by Van Aert’s colossal, unfathomable ride today.

Forget tradition, caution and specialism, just race hard. Or, as Pidcock colourfully put it, play with their balls. Even if you’re in the yellow jersey at the Tour de France.