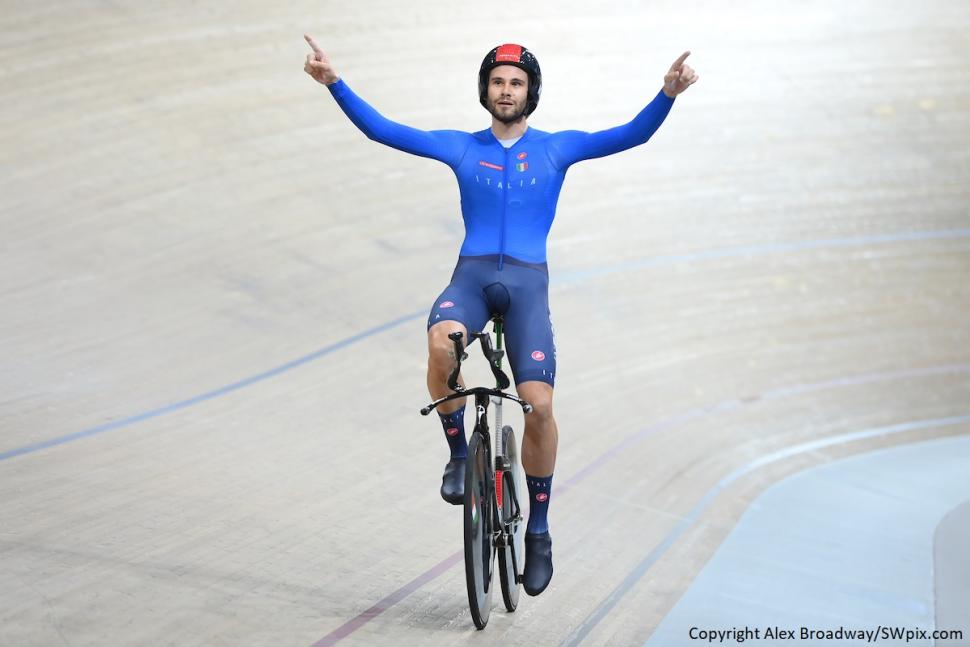 Filippo Ganna has this evening become the first man to go below 4 minutes in a 4km individual pursuit at sea level as he beat Italian team mate Jonathan Milan to win the rainbow jersey at the UCI Track Cycling World Championships in Saint Quentin-en-Yvelines outside Paris this evening.

Sir Chris Hoy, present as a pundit for BBC Sport, described the 26 year old’s ride as “the equivalent of Roger Bannister’s 4-minute mile.”

Ganna was the existing holder of the sea-level world record, setting a time of 4:01.934 at the world championships in Berlin in 2020.

The world record recognised by the UCI, however, was set at altitude by the American rider Ashton Lambie, who in August last year rode 3:59.930 at Aguascalientes in Mexico.

It’s the second record-breaking performance in a week by Ganna, who last Saturday evening smashed the Hour record in Grenchen, Switzerland.

One of his coaches for that phenomenal ride was Dan Bigham, who besides being an aerodynamicist with Ineos Grenadiers also happened to be the existing record holder, setting a distance of 55.548km on the same track in August.

In riding 56.792km, Ganna not only smashed that record, but also went further than the ‘best human effort’ set in 1996 – the year of Ganna’s birth – by Great Britain’s Chris Boardman using a bike and riding position banned under current rules.

Bigham was track centre this evening to watch Ganna clinch the individual pursuit world ride – minutes earlier he had missed out on the bronze medal in the same event when he was beaten by Portugal’s Ivo Oliveira.

Ganna characteristically rides negative splits, gradually building up his speed during the 16 laps of a 250-metre velodrome track, and so it proved this evening as Milan went off quickly, building a lead of more than a second on his compatriot.

Any thoughts that Ganna might be suffering the after-effects of that Hour effort last weekend and yesterday’s team pursuit were dispelled in the second half of the race, however, as first he reeled in Milan then got ahead of him, his pace increasing with each lap.

By the time he started the final lap, it was clear that the record was on, and roared on by a crowd that rose to its feet to cheer him on, he took the rainbow jersey and with it, a second landmark entry in the record books in seven days, completing the 4km in a time of 3:59.636.