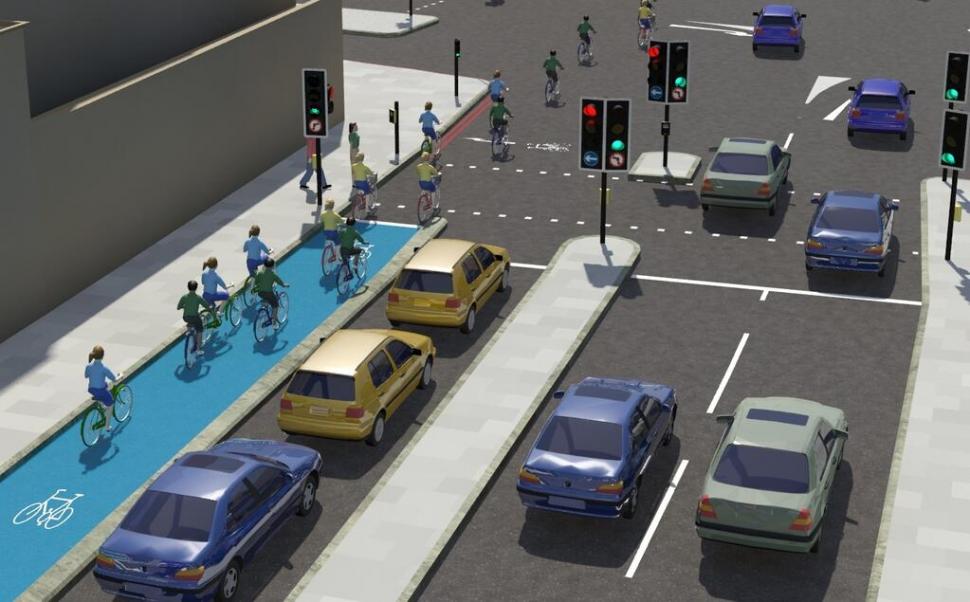 Mayor of London Boris Johnson today announced plans to spend £35 million on improved and new cycling facilities in London. Alongside the Mayor’s announcement, Transport for London said it plans to recruit over 100 designers, engineers and traffic modellers to help deliver the new cycling infrastructure.

He also announced a new “substantially-segregated cycle superhighway through the heart of central London – adding a north-south segregated route to our already-announced east-west route.”

The mayor described the new section of Cycle Superhighway 2 as “first physical fruit of my promise to improve the experience of cycling in London”.

The two-mile stretch of cycle path is almost entirely separated from the adjacent A11 and has bus stop bypasses so that cyclists are not forced out into  traffic to pass a bus.

The new section of Cycle Superhighway 2 was in use yesterday, and cyclists were quick to take to Twitter to point out that lack of a drain in one section had allowed it to fill to the kerb with rainwater.

The mayor’s office is billing this as the first fully-segregated section of cycle superhighway, perhaps forgetting that the Cable Street section of Cycle Superhighway 3 also has long stretches that are separated from motor vehicles by kerbs.

The inner section of Cycle Superhighway 2 from Aldgate to Bow, will be the first existing Superhighway to be upgraded. Work to design the upgrade has been underway since the publication of the Mayor’s Vision for Cycling in March. 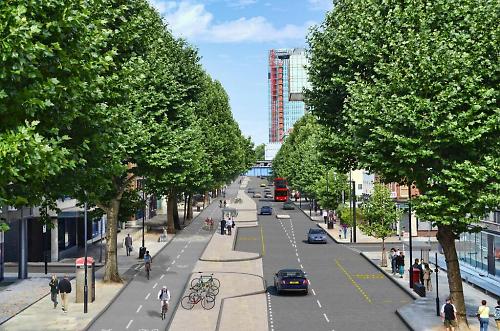 Johnson sees separated junctions as vital to the safety of cyclists. "The big issue overall in London is the interaction between cyclists and large vehicles turning left," he said.

The Aldgate gyratory will be made two-way so that cyclists no longer have to cross multiple lanes of fast-moving traffic to negotiate it.

At the launch, Boris Johnson said he would "take account of any comments and criticisms".

He told the Guardian's Peter Walker: "Those are interesting things the coroner said. The question is, what do we do about the blue strips? Do we need to radically review all those? I think the evidence is mixed, and what we're going to do is look at the unbounded blue strips and see if they need adjusting. I'm not saying necessarily that we're going to remove them, but we're going to see what improvements can be made to them."

While he said that he doesn't think fully-segregated cycling routes are possible in London because of the competition for road space, Johnson said: "It is clear that where we can go for good segregated schemes we should." 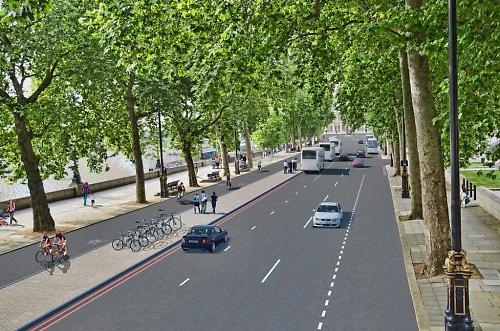 Cycling organisations gave a cautious welcome to the plans.

Mark Treasure, chair of the Cycling Embassy of Great Britain, said: “It is encouraging to see that TfL are recognising past mistakes, even if it is taking death and serious injury for them to do so. Superhighway 2 in particular is demonstrably lethal, and unattractive to would-be cyclists. Lessons are being learned in the worst way possible.

“Today’s announcements suggest that TfL are now starting to adopt proven solutions from the continent, that make cycling both safe and attractive. However, it is essential that designs really are up to scratch, and don’t just give up when the going gets tough, particularly at major junctions. That means that motor traffic capacity can and should be sacrificed, where necessary.

“Most importantly, we need to start seeing action on the ground, not just with the proposed upgrading of the entire Superhighway 2 route and the newly-announced north-south segregated Superhighway, but with a joined-up network across the city - not just single isolated routes that don’t connect with anything else.”

Sustrans’ London Director, German Dector-Vega, said:”On the back of another cycling death on the streets of London, this significant investment aimed at improving safety is much needed in response to the grave concerns of cyclists and other road users.’

“The 128 new posts in the cycling unit at TfL show that making it safe and convenient to travel by bike is becoming a real priority, as our leaders recognise the many economic, environmental and health benefits.’

“But while the cycle superhighways are great for some confident cyclists, they’re not for everyone - we also need 20mph speed limits across London for those less confident on two wheels.”