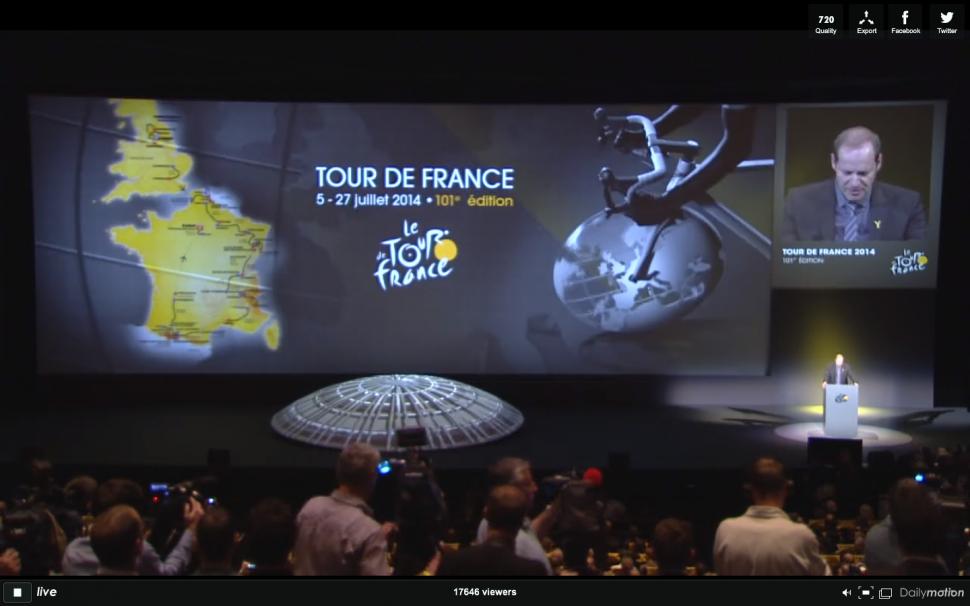 Yorkshire start, one time trial and the big mountains late in the race: who will step up to the plate in 2014?
by dave atkinson

Yorkshire, which hosts the opening two stages of next year’s 101st Tour de France, took centre stage at today’s presentation of the route in Paris.

There is a realistic prospect of a sprint finish to the opening stage of the Tour from Leeds to Harrogate, and no-one will have a greater incentive than the race’s most successful ever sprinter, Mark Cavendish: the stage finishes in his mother’s home town.

With the big mountains saved for the final third of the racing – although you shouldn't discount the ability of the Vosges climbs to split the field –  it could be an unpredictable opening fortnight with the yellow jersey changing hands several times following what race director Christian Prudhomme described in March as "the toughest Grand Départ since the Pyrenees in 1979." In his reaction to the route (which you can read here in full) Sir Dave Brailsford reckoned it was a parcours that would enourage breaks and be difficult for one team to control, no prizes for guessing which team he meant. A star-studded audience, including this year’s winner of the yellow jersey, Team Sky’s Chris Froome, learnt that cobbles will feature early on after the race crosses the Channel. Stage 5 has nine sections of cobbles, the longest at 3,700m

That’s good news for Classics specialists looking for a stage win, but a much less appealing prospect for those with their eyes on the overall victory, who will be mindful that the sections of pavé on Stage 5 from Ypres to Arenberg Porte du Hainaut could easily see their race end through a crash.

After the cobbles the race heads towards the Vosges, and first proper tests for the climbers will come there, with summit finishes above the ski resort of Gérardmer and also on the famous Planche des Belles Filles. 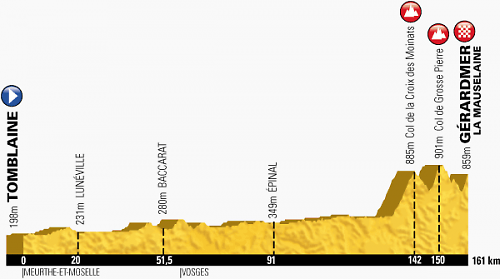 The Gérardmer stage doesn't look that tough as a whole stage but those hills at the end have some nasty surprises in store. The second kilometre of the climb to Col de Grosse Pierre averages 11.3%, and tthe final grind to La Mauselaine is nearly 2km at an average of over 10%. Not enough to decide the race, for sure, but steep and long enough to open some gaps. 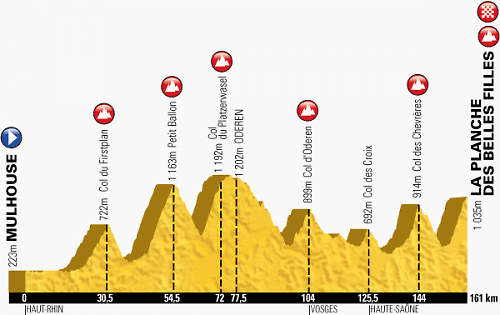 La Planche des Belles Filles comes at the end of a day that features six other significant climbs, and although it's less than 6km long that final climb is murderously steep, averaging 8.5% with a 20% ramp right at the finish. The climb before it, the Chevrères, has a kilometre at nearly 15%.

Into the Alps, the stage from Saint Étienne finishes with the climb to Chamrousses which is over 18km long with some steep sections at the bottom. Further up it's more of a tempo climb so expect to see fireworks at the bottom with the more explosive climbers trying to make a break stick. The climb to Risoul comes after the Lautaret and Izoard have been crested, both over 2,000m. Depending on the state of the race, Grenoble - Risoul looks a good bet for a mountain break to stay away, with the steady final climb less likely to see the big guns going after one another. The final climb to Pla d'Adet on stage 17 starts less than 115km into the racing; at 125km overall this stage is the shortest with the exception of the individual time trial. It's no walk in the park though, with three tough cols before that final climb steeples out of the valley at an average of 10% for the first 3km.

Pau to Hautacam is the Etape du Tour stage, and even before tackling the 14km final climb you'll have to drag yourself over the 2,115m Col du Tourmalet - the hard way, from Ste Marie de Campan. This is a stage the climbers will certainly target: late in the race any losses will be hard to claw back, and it's among the hardest of the summit finishes.

As a bonus, here's the Yorkshire Grand Départ official trailer, with a nice cameo by Ricky Feather (and his bikes)