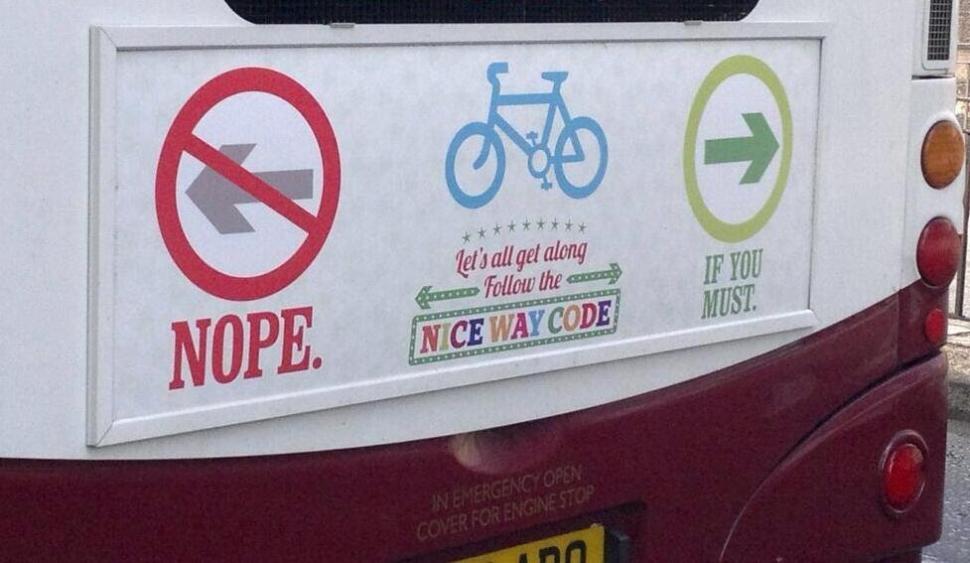 Undertaking is not illegal says council chief
by John Stevenson

The leader of Edinburgh Council, Andrew Burns, has weighed into the debate about Cycling Scotland’s ‘Nice Way Code’ road safety campaign with an attack on bus ads that encourage cyclists to overtake on the right ‘if you must’.

Writing on his blog, Councillor  Burns says: “Every working day of my life I 'undertake' vehicles - cars, taxis, vans, buses and occasionally lorries. On every occasion I do so; I do it legally; I try and do it as safely as I can; and I do it VERY, VERY carefully.

“To the very best of my knowledge, it simply is not illegal to 'undertake' vehicles on a bike - and I am NOT equating what's legal with what's safe.”

The ads, which are carried on the back of some Edinburgh and Glasgow busses, are part of a £500,000 campaign aimed at improving road safety by asking road users to be nice to each other and follow the Highway Code. But the campaign has been slammed by cycling activists for falsely equating poor behaviour by cyclists with far more dangerous poor behaviour by drivers; reinforcing stereotypes of poor cyclist behaviour; and being simply unlikely to have any effect on road safety.

Councillor Burns writes that if he didn’t pass motor vehicles, “My journey to, and from, work would take a considerably longer time to complete. And I'm just not keen on being advised that, NOPE, I shouldn't undertake a bus? And that - if I must - I can overtake it. Frankly, overtaking any vehicle - into an oncoming traffic lane - can be JUST as dangerous as irresponsibly undertaking a vehicle.”

He said: “When they first came up with the slogan it was originally going to be on the right was ‘be my guest’. That got changed to ‘if you must’ because it was felt they shouldn’t be encouraging ­people to overtake.

“If there’s a bus stopped at a bus stop, what are you supposed to do? Wait behind it until it moves off again?”

In a comment on Councillor Burns’ blog he added: “The fundamental problem with the whole respect agenda is it follows the Forester/Franklin vehicular cycling approach. This has never achieved mass cycling anywhere in the world. If the Scottish Government is serious about Scotland having a 10% modal share for cycling by 2020. Then we need to change to a Sustainable safety approach, which has been proven to work everywhere it has been tried.”

The Nice Way Code’s blog page explains the bus ads at some length, saying that the “Cycle Training Standards Board favour overtaking on the right,” and even when there is a bike lane that would seem to facilitate overtaking on the left, “there are hazards such as passenger doors being opened into the rider’s path. Riders should also beware of left turning traffic whether or not other road users are signalling their intentions correctly. “