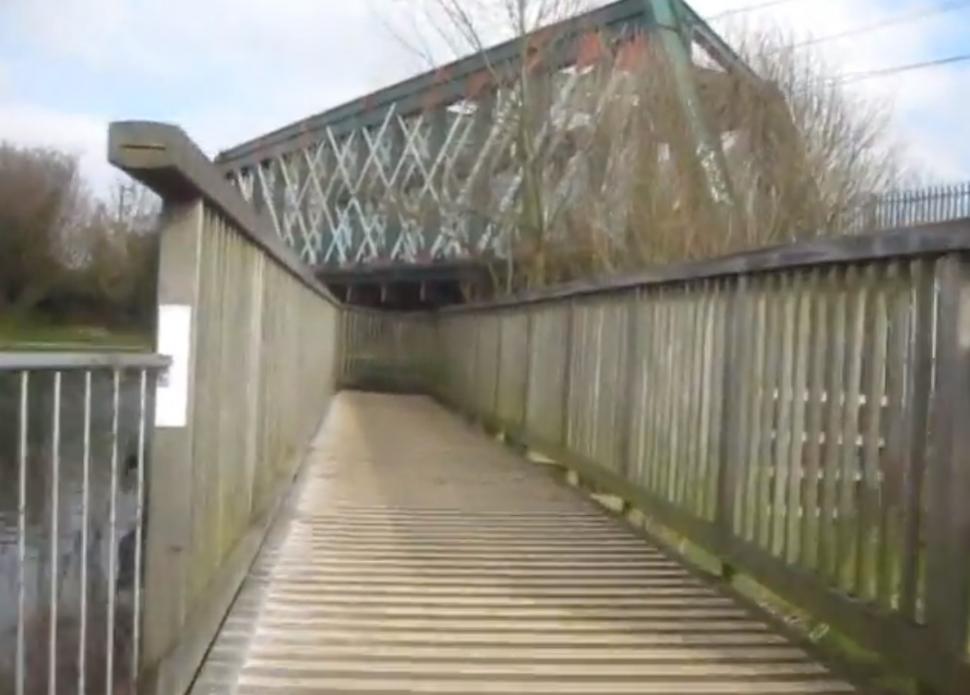 Cambridgeshire County Council has ripped up a non-slip surface on a bridge used by cyclists after riders complained of the vibrations it caused as they rode over it.

The bridge in question forms part of the National Cycle Route 51 as it runs alongside the River Cam at Stourbridge Common and beneath a railway bridge that crosses the river.

Cambridge News reports that cyclists highlighted their experiences of riding across the bridge on the website Cyclestreets.net, including the discomfort experienced through those vibrations.

Videos uploaded to Cyclestreets.net and YouTube by user Rad Wagon show the effect the ridged surface – put in place to prevent pedestrians and cyclists from slipping – has when riding a bike across the bridge.

In text accompanying the following video uploaded to YouTube on 25 February, Rad Wagon said: “The bridge under the Stourbridge Common railway bridge has been quite slippy for a while. So it's having it's slip-stop surface replaced.

“Here's a good before and after clip while it's been half done. You'll notice the rough nature of the new surface. It's actually pretty difficult to ride and must take at least 25% more effort.

“Also, the fixing is a single series of studs along the middle of each strip. This looks like it'll come up pretty easily as it feels like each strip moves around whilst riding over it.”

A further video was uploaded to the video-sharing site last Tuesday 21 May, with Rad Wagon saying: “A second clip about this after it's had time to bed in. It is awful.

“I felt great pain after finishing riding along the bridge in my forearms. I can't think what this would be like to ride regularly and whether they'd be any longer term effects.

“Just for info, I'm definitely not going too fast (around 8mph), I'm going easily slow enough to be able to stop for others. I'm not sure going any slower would help any more.”

A subsequent video posted on 22 May shows workmen removing the strips.

Twitter user K Holliday (@ImpersK) reacted to the news by saying: "Oh hooorah!!! This path is AWFUL and makes me feel sick and dizzy every time I cycle over it. Good riddance!!"

A spokesman for Cambridgeshire County Council, quoted on Cambridge News, said: “The bridge is below the railway bridge and because of the location the surface is permanently in the shade and can become damp and slippery at times.

“The non-slip plastic strips were put in place to try to improve the surface for walkers and cyclists, but unfortunately they have not proved popular, particularly with cyclists who complained the surface was uneven and caused excessive vibration when they cycled over the bridge.

“As a result of the representations from the cycling groups, the strips are now being removed.”

The council spokesman rejected suggestions that the installation and subsequent removal of the strips represented a waste of money for which taxpayers would have to foot the bill.

“The costs involved are negligible,” he said. “We already had the strips in stock from previous pedestrian bridge improvements, the cost of removing them is very small and the strips will be re-used on other pedestrian only bridges in the county. We are talking a few hundred pounds in total.”

1
Win! Over £500 of dhb Flashlight winter gear
2
Sir Keir Starmer interviewed by police after crash with cyclist while driving in north west London
3
Are these 30g pedals the lightest ever made? AeroLite Alpha TT-Ceramic pedals are for the weightweenies
4
Egan Bernal facing months of rehabilitation due to spinal condition
5
Fleet Street fury over campaigners' calls to clarify ‘two abreast’ cycling rule
6
Minivan passenger in Las Vegas killed as he pushed cyclist to her death
7
Near Miss of the Day 485: “You should know better” – 4x4 driver carrying road bikes makes close pass on cyclist
8
Hunt introduces 42mm deep Limitless gravel wheel with the promise of “maximum aerodynamic benefit”