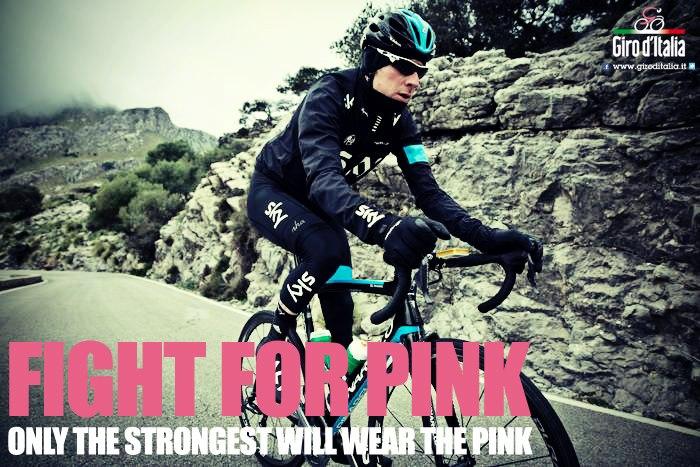 Sir Brad reckons Sky yet to decide who will spearhead challenge in July... but Froome says he's got management's backing...
by Simon_MacMichael

Days before he begins his campaign to become the first British rider to win the Giro d’Italia, Sir Bradley Wiggins has said he is aiming to defend his Tour de France title, rather than riding in support of team mate Chris Froome in July. Froome, however, insists he has the full backing of Team Sky’s management and will lead its challenge in the race. His fiancée, Michelle Cound, has appealed to the team to step in and sort out the row.

That wasn’t the impression Wiggins gave when he spoke to the BBC yesterday, however. The defending Tour de France champion, asked whether the team had decided who would spearhead its challenge, replied: "Not yet, no. I think that decision will be made probably in the last three days before we get to the Tour.

"I think whoever is in the best shape should be really. It is too early to decide but we are both, as we have now for the last six months, been going towards that same goal. Someone will get the nod."

Froome, who finished second to Wiggins last year, issued a statement yesterday evening in which he said: "There has been much speculation regarding the leadership for Team Sky at the Tour de France this year. I have made it clear that winning the Tour would be my main objective for 2013.

"Attempting to win the Tour de France, is a massive undertaking and will take total commitment from each and every team member.

"The Tour team has yet to be selected but with the depth of talent that we have at Team Sky, I have no doubt that the strongest and most willing riders will be there to support me," added Froome, who on Sunday sealed the biggest win in his career to date at the Tour de Romandie.

This afternoon, Froome's fiancée Michelle Cound, who clashed on Twitter with Wiggins' wife Cath during last year's Tour, took to the social network to appeal to Team Sky's management to sort out the row - and presumably have a quiet word with Wiggins.

"Chris & Brad on the same start line, in the same kit? Mmmmmm… doubt it!" she said, rather cryptically, in an initial tweet.

She went on: "To those claiming that this Wiggins/Froome thing is some sort of publicity stunt, you are wrong," and concluded: "I look forward to @TeamSky clearing up this mess (ASAP) #fedup"

Wiggins, however, insists that the matter of leadership during the Tour is one "for the team management to decide.

"We are both on different paths and we're both professionals," he went on.

"We have been there before. We're on the same team and know what needs to be done.

"I would be comfortable in a supporting role but it's not like I'm going to ride 200km on the front and swing off and lose 30 minutes. I want to be there at the death, I want to be on the podium."

Wiggins added: "Somebody will need to make that decision. It will be quite hard, and I'm glad it's not me, but Dave [Brailsford] is good at it."

Turning to the Giro, Wiggins reflected: "It's a huge challenge, probably bigger than the Tour de France.

"The Tour de France is my focus, it's just that I'm doing the Giro before," he added.

"It's like last year and the Olympics," added Wiggins, who won time trial gold in London just ten days after winning the Tour de France.

"I was focused on that and the Tour. This year the Giro comes first"

No rider has completed the Tour-Giro double in the same season since Marco Pantani in 1998. but Wiggins is confident he can compete in both races.

"My saving grace is that I haven't gone out and tried to cash in on the Olympics and got my face everywhere - got on game shows and all this stuff - like most of them have done," he continued.

"I went back to work on 1 January. I've been out there grafting with my team. I've gone back to trying to do what we do best - and that's trying to win bike races."

Wiggins’ comments about the Tour appear to contradict previous statements from team principal Sir Dave Brailsford that Froome would be the prime focus during the race, and underline what many see as a rivalry between the two riders dating back to the 2011 Vuelta.

There, Froome had taken the race lead following a time trial in Salamanca but the following day rode in support of Wiggins, who took over the red jersey from him. In the final week of the race, Froome proved stronger, but would finish 13 seconds behind winner Juan Jose Cobo, with Wiggins more than a minute back in third.

Had Sky got behind Froome when he took the race lead, there’s every chance he would have won the Vuelta, and those looking for signs of a feud between the riders got plenty of ammunition during last year’s Tour de France, particularly when Froome appeared to attack Wiggins towards the end of a mountain stage.

Froome, who had lost a minute and a half earlier in the race to a puncture, insists he was trying to make up time on riders including Vincenzo Nibali and Cadel Evans, and points out that Wiggins’ dominance in the time trials would have seen him win the race anyway.

While Froome, aged 27, could challenge at the top for the best part of a decade, Wiggins may also be aware that he is running out of time - he turned 33 on Sunday. Only one man – Cadel Evans in 2011 – has won the Tour de France beyond that age within the past six decades.

Uncertainty over exactly what Sky’s plans for the Tour could also have a psychological effect on their rivals, and Brailsford of course is a master at mind games – remember the talk about Team GB’s ‘magic wheels’ prior to the Olympics last year?

So unless the issue is clarified one way or another, a seed of doubt is sown in opponents’ minds over which rider may present the greater threat.

And as we have seen in the last two editions of the Tour, luck can also play a part – Wiggins’ broken collarbone in the 2011 race, or the minute and a half Froome lost to that puncture towards the end of the first road stage last year. Having a Plan B – or even two Plan As – is no bad thing.