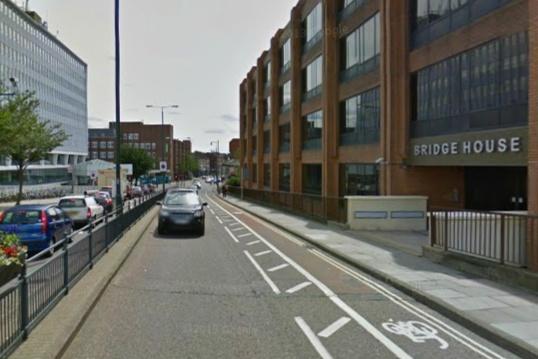 Police in south west London have been issuing fines to drivers using a cycle lane across a railway bridge to beat traffic queues, with seven fixed penalty fines issued in the space of an hour last Friday, and plans to resume the operation once the school holidays are over, reports the Richmond & Twickenham Times.

Police had previously been told by cyclists about motorists illegally using the cycle lane, although it appears that action was only taken after Clive Chalk, Borough Commander for Richmond Upon Thames, was nearly knocked off his bike there.

PC Nick Blyth of Richmond Safer Transport Team told the newspaper: “Cyclists have complained previously that cars come right up behind them in their cycle lane and intimidate them when they should not be in the cycle lane in the first place.

“Cars that use the cycle lane tend to be travelling at an unsafe speed and should they come over the brow of the hill and encounter a cyclist they would have trouble stopping in time.”

Additional warning signs have been erected warning drivers of the cycle lane, and those caught using it were handed £30 fixed penalty notices.

“Most of the motorists tend to comment when stopped that everyone else does it and they were just following them,” added PC Blyth.

Alastair Barr of Richmond Cycling Campaign told the newspaper: “The London Road cycle lane is a vital link, including many mums and dads who cycle to school with their kids or to and from Twickenham riverside.

“Being intimidated off the road is a concern many of them share with us, and often leads many to resort to cycling on the pavement,” he added.

“Improving the understanding of and the enforcement of the rules of the road, whether on two wheels or four is beneficial for everyone.

“Ultimately, it is about making our streets safer for everyone and we’re really encouraged to see the police take these concerns seriously."

Coincidentally, the location where the police have been enforcing the mandatory cycle lane is the subject of controversy at the moment, with Richmond Cycling Campaign having criticised council proposals for a new road layount including cycle lanes on and around the railway bridge.