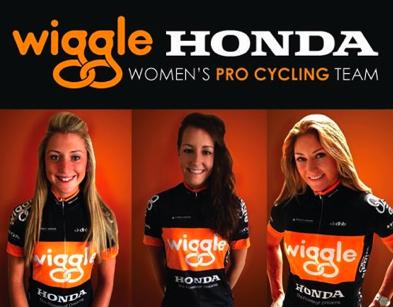 Could Team Sky be about to run a women's team?

Team Sky could be about to announce an interest in running a women's pro cycling team alongside their highly successful men's outfit, according to the owner of Wiggle Honda.

Rochelle Gilmore, the owner of Wiggle Honda, floated the idea that Sky might be close to making the much-anticipated move, having been giving enormous amounts of financial and administrative support behind the scenes.

She told the Guardian: "Sky want to be involved in this project, or a project, and if everything goes well here I wouldn't be surprised if they got involved."

"We are very much involved with the men's Sky team, we just don't have Sky on our jerseys. I rely on them for advice and guidance, I update them on email every week and get feedback on decisions and possible problems.

"When Dave [Brailsford] gives me advice with such passion it motivates me. I think this year the programme we have at Wiggle Honda is a bit of a trial, to see how the organisation runs."

Laura Trott, Dani King and Joanna Rowsell were all signed up by Wiggle Honda following their London Olympic successes.

Rowsell said: "What I've found since the Olympics is that a lot more people are following women's cycling and are getting excited about it. I'm always getting messages on Twitter saying: 'Is your race on TV?' and I'm, like: 'Sorry, not a chance in hell.'

"You can't force people to be fans of the sport but I think it would be great if our races were on TV because then people could follow us. It's frustrating when you watch a men's race all afternoon on Eurosport and no women, especially when there are races like the Tour of Flanders which is on the same course, on the same day."

Lizzie Armitstead, who joined the Boels-Dolmans cycling team for the 2013 season, has previously called on Sky to support a women's squad, although she said she was looking forward to her future with her new team.

"I'm very happy where I am and I get great opportunities, so if there was a women's Team Sky the last thing I want people to say is 'oh well, you've been asking for a women's Team Sky and you're not going there', because that's probably what would happen - I probably wouldn't go."