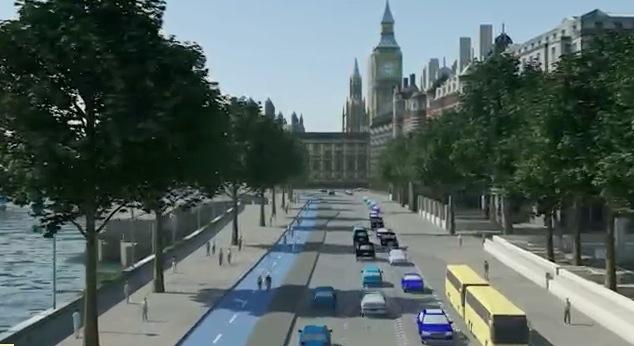 Vision for Cycling includes 15-mile segregated route would run from suburbs in West to Canary Wharf + "'A tube network for the bike"...
by Simon_MacMichael

Mayor of London Boris Johnson has published his Vision for Cycling for the capital, the centrepiece being what he has termed 'Crossrail for the bike' - a 15-mile corridor running from East to West across the city. He claims it will be "the longest substantially-segregated continuous cycle route of any city in Europe" and says "It will use a new segregated cycle track along, among other places, the Victoria Embankment and the Westway flyover" - turning one lane of one of the capital's most notorious roads into a two-way, segregated cycle lane.

While much of the Mayor's Vision for Cycling has been applauded by cycling organisations such as the LCC and Sustran as well as London's influential cycling bloggers, praise has not been universal. In it's response the LCC highlights a number of concerns including a seeming drop in funding for cycling after this mayoralty. In her response Caroline Pidgeon Chair of the London Assembly Transport Commitee led with her criticism:

“Far from seeing evidence of a serious commitment to a 'cycling revolution', the Mayor’s vision lacks ambition for his pledges to make London safer and more inviting for cycling. While £913 million may seem an impressive figure, its impact will be diluted over ten years and is not a significant advancement on current funding levels. To have real impact, we’re calling for the investment in cycling to be doubled.

“The Committee has previously highlighted how segregated cycle paths, junction and cycle superhighway improvements and tackling HGV safety would improve safety for cyclists, and we're delighted to see these included in the Mayor's cycle vision. If Boris Johnson is serious about leaving a lasting cycling legacy for London – boosting journeys by bike and improving safety – more ambitious targets, backed by serious funding, are needed."

However, it is undeniable that the Mayor's proposals, which would have been unthinkable 18 months ago prior to a series of high-profile deaths of cyclists in London that led to the issue of cycle safety becoming a key campaigning area in last year's mayoral elections, will involve an investment of £400 million over the next four years, equivalent to £18 per capita per year, which the mayor says is comparable to the leading cities in Germany and nearing the levels spent in the Netherlands.

1. A Tube network for the bike. London will have a network of direct, high-capacity, joined-up cycle routes. Many will run in parallel with key Underground, rail and bus routes, radial and orbital, signed and branded accordingly: the ‘Bakerloo Superhighway’; the ‘Circle Quietway’, and so on. A ‘bike Crossrail’ will run, substantially segregated, from west London to Barking. Local routes will link with them. There will be more Dutch-style, fully-segregated lanes and junctions; more mandatory cycle lanes, semi-segregated from general traffic; and a network of direct back-street Quietways, with segregation and junction improvements over the hard parts.

2. Safer streets for the bike. London’s streets and spaces will become places where cyclists feel they belong and are safe. Spending on the junction review will be significantly increased, and it will be completely recast to prioritise major and substantial improvements to the worst junctions, though other junctions will still be tackled. With government help, a range of radical measures will improve the safety of cyclists around large vehicles.

3. More people travelling by bike. Cycling across London will double in the next 10 years. We will ‘normalise’ cycling, making it something anyone feels comfortable doing. Hundreds of thousands more people, of all ages, races and backgrounds, and in all parts of London, will discover that the bike has changed their lives.

4. Better places for everyone. Our policies will help all Londoners, whether or not they have any intention of getting on a bicycle. Our new bike routes are a step towards the Mayor’s vision of a ‘village in the city’, creating green corridors, even linear parks, with more tree-planting, more space for pedestrians and less traffic. Cycling will promote community safety, bringing new life and vitality to underused streets. Our routes will specifically target parts of the Tube and bus network which are over capacity, promoting transfers to the bike and relieving crowding for everyone. Cycling will transform more of our city into a place dominated by people, not motor traffic.

His plans were formally unveiled in London later this morning, when he will be accompanied by London Cycling Commissioner Andrew Gilligan, and former World and Olympic Champion Chris Boardman.

Other highlights of the Vision for Cycling published this morning, according to the mayor, are:

Noting that the number of people cycling in London has nearly trebled over the past decade, the mayor says: “The success of our policies to increase cycling means we must now greatly increase our provision for cyclists – and, above all, for the huge numbers of Londoners who would like to cycle, but presently feel unable to.”

He adds that “Cycling will be treated not as niche, marginal, or an afterthought, but as what it is: an integral part of the transport network, with the capital spending, road space and traffic planners’ attention befitting that role.”

Speaking about the plans, Boardman said: "This is most ambitious cycling development & promotion plan in UK in living memory, perhaps ever."

Sustrans, which published its own blueprint for the future of cycling in the capital, Connect London, welcomed today’s announcement but said that implementation would be key.

“The London experience shows that real progress can be made through committed political leadership that listens to the voice of cyclists and creates a long-term vision for cycling.

“The Mayor’s latest plans include a raft of ideas that will help cycling become a genuine choice for getting around, particularly new riders and those in outer London.

“As ever, the devil will be in the detail and Sustrans looks forward to working with the Mayor, local authorities, Transport for London and cyclists themselves to ensure we grasp every opportunity to make our roads safer, our cycle network better and, crucially, train and inspire more Londoners get on their bikes.”

In a blog post this morning, Danny Williams of Cyclists in the City said: "I have never seen a commitment to cycling as ambitious as this in this country. I’ve read countless plans by councils and by other cities and I’m familiar with the strategies adopted in other countries.

"Boris isn’t promising to bring Copenhagen or Amsterdam to London, Williams added. "But he is promising to bring about a better London. And I think that’s the right thing to do. London excels at many things it does. Our bus network is world-class. Our tube network, while some people might grumble, is pretty much world-class. It’s time our streets became first class too. And cycling is going to have to be part of that. A very significant part."

Mark Ames of the I Bike London blog said that the proposals revealed today were a victory for those who had fought for cycling provision in London to be improved, writing: "All-in-all this is a victorious day for cycle campaigners - during his first term we put the Mayor and his office under enormous pressure, and rightfully so.

"Against the unique background of cycling becoming more dangerous in London the more people who did it, the calls and cries for sweeping action were loud and united in their cohesion. Many of you have taken part in flashrides, bike protests, letter writing campaigns, signed petitions and helped to spread the word, and that pressure is what has helped to lead to today.

"Boris is "the cycling Mayor" and at times that entire relationship looked likely to turn sour and do him more harm than good. His ambition for all things bicycle has never been under question, but his commitment to real change and to detail was.

"To his credit, he's gone away and thought about his proposals, listened to all of your voices and come back with a proposal delivering exactly what cycle campaigners have been asking for: world class cycling infrastructure, world class streets, more and safer cycling and the opportunity for many more people to ride a bike safely."

“The Mayor’s Vision for Cycling is exciting and ground-breaking, and a just reward for the 42,000 people who supported our Love London Go Dutch campaign. Although it could be improved and we are yet to see the details, which will be critical to its success, the Vision represents a major leap in political ambition and funding for cycling over the next three years, and is an unambiguous commitment to learning from international best practice as called for by LCC supporters.”

The LCC also expressed it's concerns about a number of things lacking from the Mayor's vision including no direction to TfL to priioritise cycling and walking as the general rule in London, what appears to be a sharp drop in funding for cycling from the next mayoralty onwards, and no commitment to further lift cycling's modal share of transport in London beyond the current 5 per cent target - the Greater London Assembly recently recommended it be raised to 10 per cent.

The LCC has produced it's own analysis fo the Mayor's plan highlighting what it sees as its strengths and its weaknesses which can be accessed here.