We finally get to play with the newly updated Garmin Edge 810. And we're impressed
by David Arthur @davearthur

We reported a little while back on the newly released Edge 810 (and smaller 510). At the London Bike Show yesterday Garmin UK’s Simon Gilbert gave us a run through of the new features, and we had our first hands-on experience with the first update to the 800-series since it launched a couple of years ago.

In the hand the 810's dimensions and shape are identical to the current Edge 800, the power/start buttons are all in the same place. It’s when you start prodding at the screen that you realise what Garmin have been spending their time on - it is noticeably more responsive and navigating through the various menus is a smoother experience. 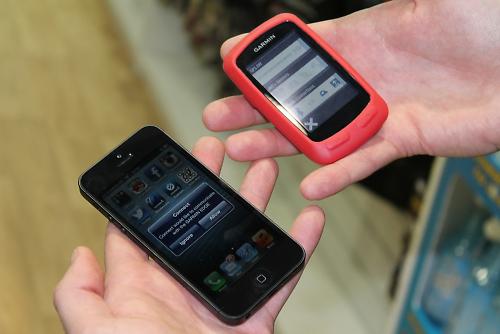 The screen is the same, with the same resolution as before, but the software has been totally revamped. As a result, and this is only based on 10 minutes with it, I found it more intuitive to move around the various menus and settings. Things look different from the off, you're now presented with a home screen that lets you choose your bike. This is feature that has been dragged up from the depths of the previous Edge 800 and turned into a top-level feature.  You can have up to ten bikes, so if you regularly swap your Garmin between a road, cross and/or mountain bike, you can separate training data for each bike.

To get going, it’s simply a matter of pressing Ride, choosing your bike, and off you go. It does mean a little bit of extra work to input details of the bike, but it’s obviously easier if you only have one or two bikes. Once it's done though, you're off. It allows you to keep individual mileage and achievements when I’m on different bikes. The data displayed can be customised for each bike, so power measuring on your road bike, navigation on your mountain bike, for example.

At the bottom of the home screen are three icons, a folder, map and setting, replacing the previous menu button. Pressing the folder button gets you into all the categories like course, workouts, activities, achievements and so on. The map icon takes you to the mapping and navigation screen, and the settings lets you fiddle with the guts of the device. It’s worth noting that while the resolution of the screen hasn’t been upgraded, the look of the menus feels similar to smartphone menus, and as such I felt right at home. The look is cleaner and I found it easier to move around the many screens of the Edge 810. I like it.

Of course the other big news is the 810’s Bluetooth connectivity to a new Garmin Connect app. It’s here that things get interesting, and in our demo I was impressed with how easily the Edge synched up with a smartphone. The app allows you to some some cool things that were previously impossible, and one of them will appeal to people who like to share their rides with friends on social networks. With the Edge 810 connected to the smartphone, the moment you finish a ride and hit finish, the data is automatically uploaded to Garmin Connect and shared via Facebook or Twitter. It’s entirely optional, you don’t have to share immediately if you don’t want to. 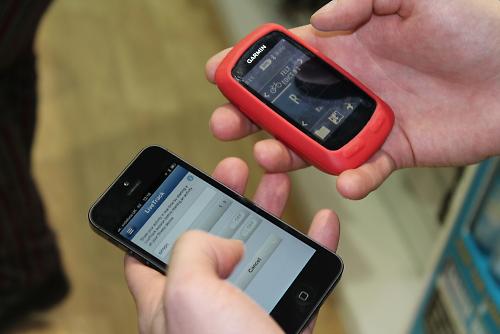 Other interesting things you can do is LiveTrack a ride. The app will send an email to a friend or partner, or you can share with Facebook and Twitter followers, and will let them see your position, updated every minute, on a map. We can see this appealing to many people, and particular charity riders - you could put a link to the LiveTracking map on your Just Giving page, as an example.

With the rise in the number of training apps that let you track and share rides through a smartphone, it’s very clearly a smart move by Garmin to tap into the popularity of sharing rides on social media networks with an app that cleverly still puts the Edge at the centre of the ride experience. The rugged design of the Edge 810 and its 17-hour battery life is still a huge appeal over using an app on an expensive and fragile smartphone, and their short battery life.

We’ve yet to get any ride time in with the new Edge 810, but one landed at the office while we were at the London Bike Show. So as soon as we’ve logged some miles with it we’ll report back with a proper real-world test. For now, we’re impressed. It’s not quite the big update many were expecting, and some may be surprised there’s been no update to the size of the device and the resolution of the screen, but the changes to the software, based on our short time with it, takes it a small leap forward.