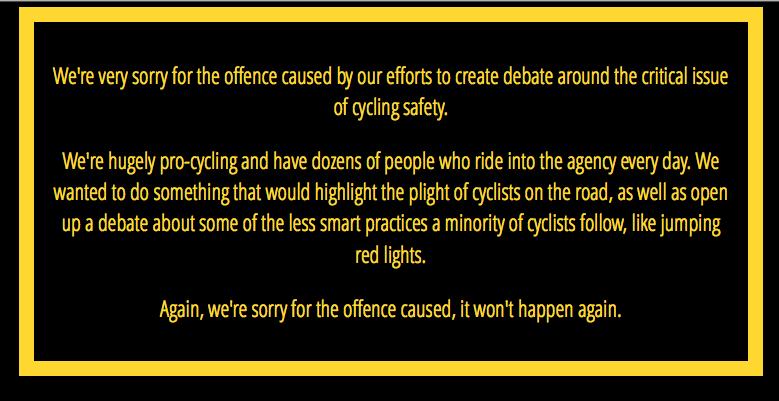 Agency has chairman who heads ad trade body, clients including cycling sponsors, and investors with links to Olympic legacy and sustainability
by Simon_MacMichael

A website that described cyclists killed and injured on the roads as 'stupid twats' has replaced its original text with an apology this evening (see above) following a wave of criticism. As road.cc can reveal, the firm behind the campaign is headed by a woman who also leads the advertising industry’s trade body, has clients involved in sponsorship of cycling and is backed by a private equity company one of whose senior staff is closely involved with sustainability issues, including cycling, as part of the Olympic Park legacy.

By 10pm this evening, the website at ride-smart.org had been taken offline, with creative agency Karmarama suffering a backlash from cyclists once news of it spread via Twitter. The site was also criticised for having lifted video footage from YouTube without crediting or linking back to the sources.

Instead of the text that had been there earlier deploring “Cyclists riding like stupid twats” being responsible for their own death or injuries, an apology appeared saying that the intention was to create a debate about safer cycling. That in itself is a laudable aim, but the company certainly didn't endear itself to cyclists with its approach - as you judge for yourself, since thanks to the magic of caching, you can still view the original site here.

We're very sorry for the offence caused by our efforts to create debate around the critical issue of cycling safety.

We're hugely pro-cycling and have dozens of people who ride into the agency every day. We wanted to do something that would highlight the plight of cyclists on the road, as well as open up a debate about some of the less smart practices a minority of cyclists follow, like jumping red lights.

It’s unclear whether the site as well as signage installed in London with limericks relating how fictional cyclists had contributed to their own death by for example jumping red lights was set up on behalf of a client, or may even have been, according to one theory, an exercise in seeing how quickly a campaign could go viral by pressing the right buttons. If that's the case, they proved their point.

But it's likely they've also learned something too; social media means it's impossible nowadays to make sweeping generalisations about a group and ignoring the fallout from that, something that cab firm Addison Lee and magazine Auto Express have discovered to their cost this year.

Sites such as Twitter enable cyclists - a broad group but one that typically reflects an affluent demographic of the type coveted by advertisers - to mobilise quickly to voice their concerns, and inevitably as news spread of the ride-smart website, a similar site went up under the name advertise-smart, outlining reasons for advertisers not to put their business the way of the agency involved, Karmarama.

That agency certainly isn’t a minnow trying to make a name for itself by creating a guerrilla-style campaign that was always certain to attract attention; a leading independent London agency with blue-chip clients, it is owned by Karma Communications which recently moved its 250 staff into new headquarters on Farringdon Road.

Karmarama’s executive chairman and partner, Nicola Mendelsohn, is currently coming to the end of a two-year term as president of the Institute of Practitioners in Advertising, which among other things requires its corporate members to uphold “legal and ethical standards, including the IPA Bye-laws, British Codes of Advertising Practice and Sales Promotion, and rulings of the Advertising Standards Authority and OFCOM.”

The Advertising Standards Authority, whose remit nowadays extends beyond print and broadcast advertising to websites, requires all advertisements to be “legal, decent, honest and truthful.”

Holding company Karma Communications was set up in May 2011 by Phoenix Equity Partners with the purpose of making strategic acquisitions in the industry.

The first of those was Karmarama itself, whose clients include coffee house chain Costa, whose sub-brand Costa Express sponsored Rapha-Condor-Sharp during this year’s Tour of Britain, and the BBC, which hosted coverage of Team GB’s dominant performance in cycling at the London Olympics this summer.

A subsequent acquisition, Crayon, was merged into Karmarama earlier this year, and among the clients it brought was Honda, which is sponsor of the women’s cycling team backed by Bradley Wiggins announced last week.

One of Phoenix Equity Partners’ senior advisors, David Gregson, is a trustee of the environmental charity WWF and also sits on the board of the London Legacy Development Corporation, which is responsible for the Olympic Park now that London 2012 is over.

In a blog post for the WWF about the Olympic Park and sustainability, he imagines what the park will be like in 2030 with its 22 miles of footpaths and cycleways, and expresses the hope that “during my tenure guiding post-Olympic legacy decisions I have been something of an environmental champion.”

Perhaps he could pass some of his experience about promoting environmental initiatives without antagonising people who pursue sustainable travel on to the company his firm invests in?