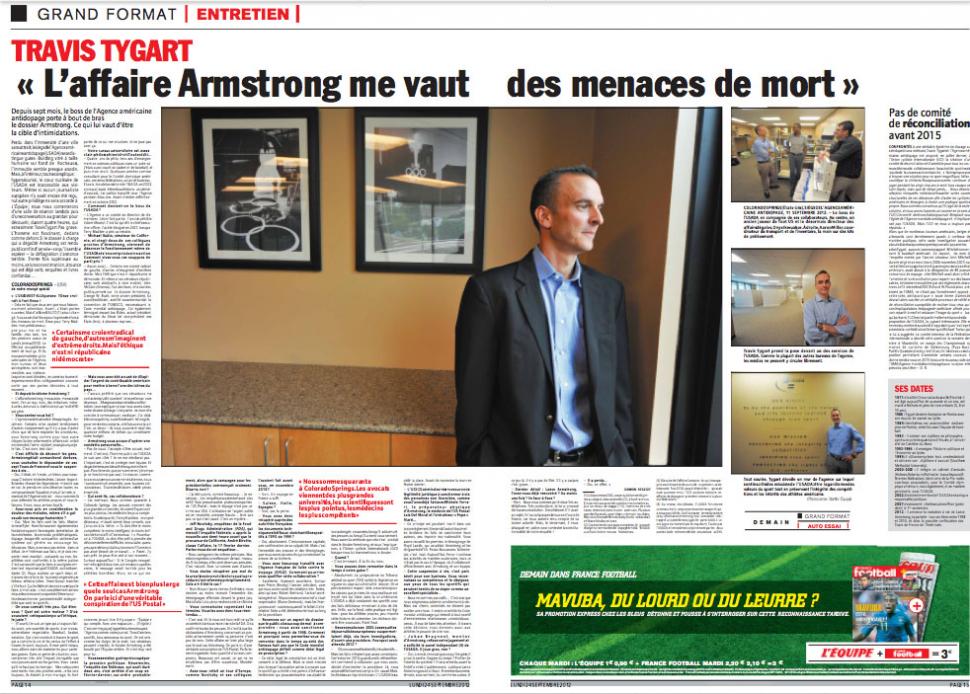 Travis Tygart, the director of the US Anti-Doping Agency (USADA), revealed in an interview with the French sports daily l'Equipe yesterday that he had received three death threats in response to the investigations into Lance Armstrong which concluded with the former seven-time Tour de France champion being stripped of his titles.

The article has been translated in full on the Tour de José blog and makes for compelling reading. For a start, we learn that it's not the first time that the staff at USADA have had their lives threatened. Asked why the USADA offices are so secure and whether the staff are paranoid, Tygart responds, "Since the BALCO case everything changed. We received death threats for the first time. Two for Terry Madden, my predecessor and a bit later one for me and my family when the Landis confessions came out. My office is now inaccessible to visitors. The blinds are down and the cameras are on 24/7." He goes on to say that three more death threats, all from individuals, were received during the Armstrong investigation.

Armstrong was stripped of his titles after deciding not to go to arbitration to answer USADA's case against him back in August; the Texan denounced the process as an "uncostitutional witch hunt". At the time, Tygart said that "It is a sad day for all of us who love sport and our athletic heroes. This is a heartbreaking example of how the win-at-all-costs culture of sport, if left unchecked, will overtake fair, safe and honest competition."

Tygart is obviously very aware that the work of USADA has polarised opinion in the United States, but is adamant that due process should be carried out, whatever the target of the investigation. "I have no other choice than follow the procedures in Armstrong’s case, just like for any other citizen." he says.  "We either bury this case or we do our job. I love this job and I know why I do it."

There's plenty of other nuggets in the interview too, which precedes the publication of USADA's case file on Armstrong, slated for the end of the year. l'Equipe's prologue to the interview states that the file will be "Thirty times" worse than anything previoulsy released in investigations and books, though whether that's their take or a quote from Tygart isn't clear. Certainly it seems that USADA's investigation had to proceed without any of the evidence from Jeff Novitzky's federal investigation which ran for two years but was abruptly ended in February. "Theoretically we should have received at least the grand jury testimonies," says Tygart, "but we got nothing."

One thing that's been missing up until now in investigations regarding Armstrong is any documentary, test-based evidence of doping to back up the mounting testimonials. However, when asked whether he had received technical documents regarding six positive EPO samples from 1999, Tygart responds, " Absolutely. It’s huge proof. A confirmation of his guilt. But it’s the proof and the testimonies together that form the proof of his foul play." Tygart also confirmed that he had spoken to Armstrong twice. "It was all very formal," he reveals. "I offered to find a solution, to cooperate. If he had accepted the offer, he wouldn’t have lost his seven Tour de France titles because we would have taken his cooperation into consideration. But the next day he attacked us and the constitutionality of our investigation."