With its hydraulic disc brakes, tubeless 650B wheels, dynamo front and rear lights, I think this could be my ultimate commuting bike. Just what defines the ultimate commuter is influenced by your personal taste and the particulars of your commute of course, but the Bendixen ticks a lot of boxes.

Bendixen will make you anything you want; custom is their approach to bicycle manufacturing, each frame designed to suit individual needs. The Pinion 650b uses the very clever Pinion gearbox and there was a notable uptake in the number of bikes designed around it at Eurobike.

Like Bendixen, Pinion are a German company, and arguably make the most complete gearbox currently available. It's taking some time for gearbox systems to really take off, but they offer some great advantages for the future of city, commuting and touring bikes. A fully enclosed transmission is a benefit with everything completely sealed. The twist shifter gives you 18 speeds with a huge 636% range - more than a triple drivetrain. Bendixen have built a very lovely looking frame with the gearbox neatly integrated, nestled just above the bottom bracket. A chain guard will stop your trousers getting caught in the chain and a small chain device fixed to the rear dropout keeps the chain tensioned.

The other standout feature is the 650B wheelset. Now we haven't seen many bikes with this wheelsize at Eurobike (unless you included mountain bikes in which case it's the latest buzz) so it was interesting to see this example.

650B wheels were popular with French touring cyclists up until the 1980s when they faded out of fashion. There is a French organisation dedicated to keeping the standard alive, the Confrerie des 650B so we could yet see their return. There is an advantage of the smaller wheels particularly on commuting and touring bikes, where comfort trumps performance.

You could run a fatter tyre, up to 38mm, yet still have the same outside diameter as a 700c wheel with a 22mm tyre. The wheels on this bike are Stan's NoTubes Crest 650B rims paired with Pacenti Pari-Moto 38mm tyres. They weigh 290g and is made by Panaracer in Japan. 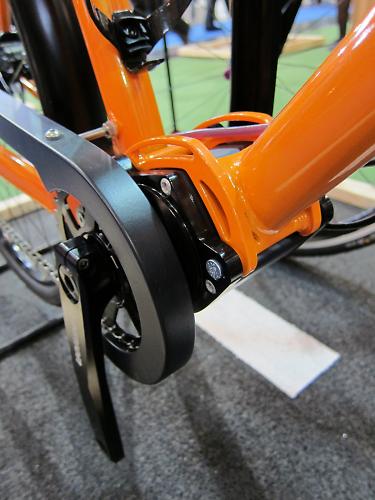 Another feature that strengthens the case for the tag of ultimate commuting bike tag is the Supernova dynamo front hub. It powers an front LED light and a rear light, fitted inside the rack. Brakes are hydraulic providing ample stoppage when you need it and a smattering of lightweight Tune components (stem, seatpost and saddle) give it a performance edge. The handlebar, a swept back design, I'm not so sure about. 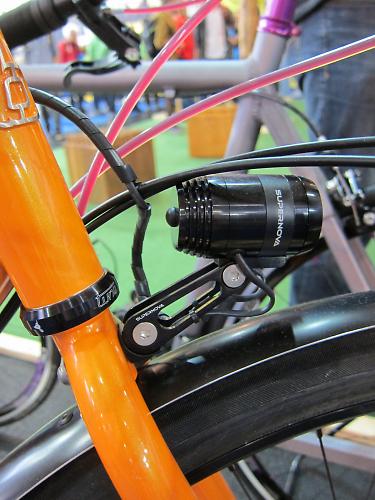