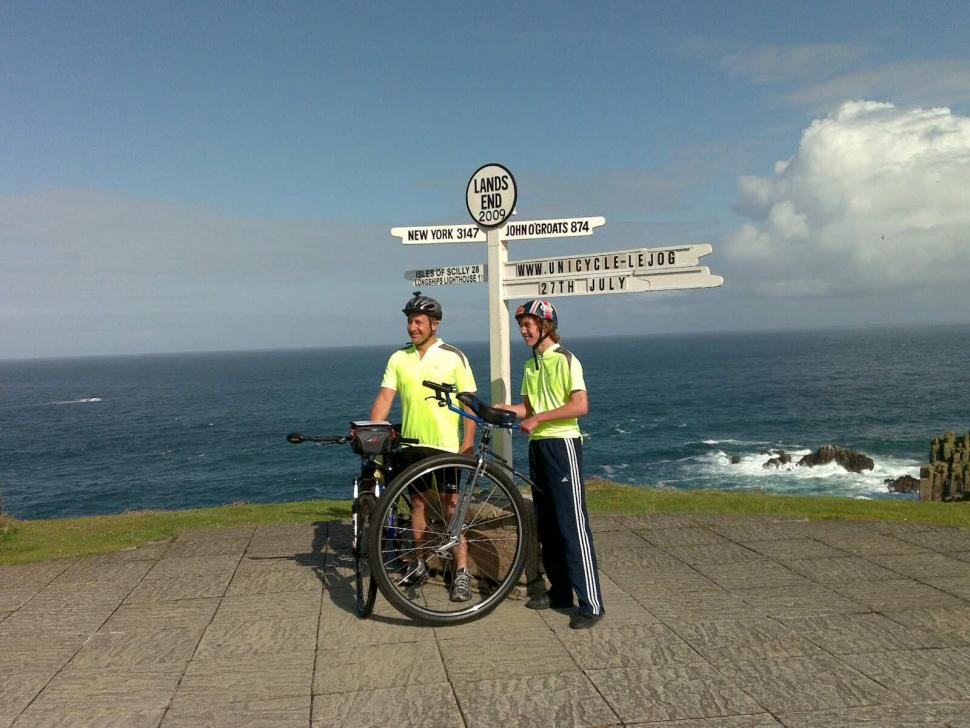 Unicyclist Samuel Farmer is back home after his tough challenge riding from Lands End to John O’Groats on just one wheel. And the incredible thing is he’s not tired.  “I’m not too tired which is surprising,” said Sam. “I finished on Monday and we decided to stay up there and got back yesterday evening.”

The more pressing matter of course is that Sam also looks to have become the youngest person ever to do the ride on a unicycle too. “I’ll send off the evidence to the LEJOG Association and then hopefully it will be officially recognised as the Guinness Word Record. I’ve also raised a couple of thousand pounds too, although we don’t know the exact figure yet.”

The 15-year-old did the challenge to break the record and also raise money for the Pediatric Intensive Care Unit at Southampton Hospital, Hampshire, The Peanut Ward at the Queen Victoria Hospital in East Grinstead, and the Bicycle Helmet Initiative Trust.

And the challenge certainly proved tough for the youngster, born in Perth, Scotland, but now living in West Sussex, particularly a stretch from Lisgard through Exeter and onto Taunton.

“It took 12 and a half days riding, and we’ve been away from home for 14 days altogether. I did 938.64 miles on the unicycle altogether. Day two was definitely the hardest. I did 75-80 miles on average a day but day two was 55 miles just of hills and it took 8 hours 46 minutes that day alone, whereas normally I was riding for around seven hours every other day.”

Sam averaged 12-13mph on the ride on a modified Qu-Ax 36" unicycle, which is used purely for long distance providing the rider has the strength and stamina to pedal all day, but they are capable of speeds in excess of 20mph.

Both parents supported him on his journey – dad Mike was on a mountain bike and carrying basic supplies, while mum Caroline was driving the motorhome which acted as home on the challenge.

Now that Sam’s finished it will be back to school next month, to surely what will be a heroes welcome? “No one actually believed me at school at first until it was announced in assembly about a month before I set off. In fact only dad thought I’d do it - Mum said it wasn’t possible.”

And has it given him a taste for more long distance challenges in the future? “Well I ride everyday but I usually do trials riding which is jumps and tricks. I think I’m going to take a break from long distance cycling for a while. My spoke snapped on the last day and I didn’t even realise. I’m keeping it as souvenir.

To read all about Sam’s ride and to make any donations visit http://www.unicycle-lejog.co.uk/index.html?_ret_=return

1
Garmin Edge 520 owner adds to criticism of firm’s out of warranty support
2
Win! Fulcrum Wind 40 DB wheels worth £1,100 up for grabs!
3
"No Plan B" – Milan-San Remo at risk of cancellation due to coronavirus
4
Near Miss of the Day 378: What is it about overtakes on straight roads into oncoming traffic?
5
Cooper Bikes partners with Spoon Customs for limited edition bikes celebrating historic Formula 1 success
6
Police warn cyclists not to use Taff Trail after dark following spate of robberies
7
Former Swiss pro leaves the team he founded after admitting involvement in Aderlass doping ring
8
Dangerous driver who killed cyclist fails to have 10-year driving ban overturned