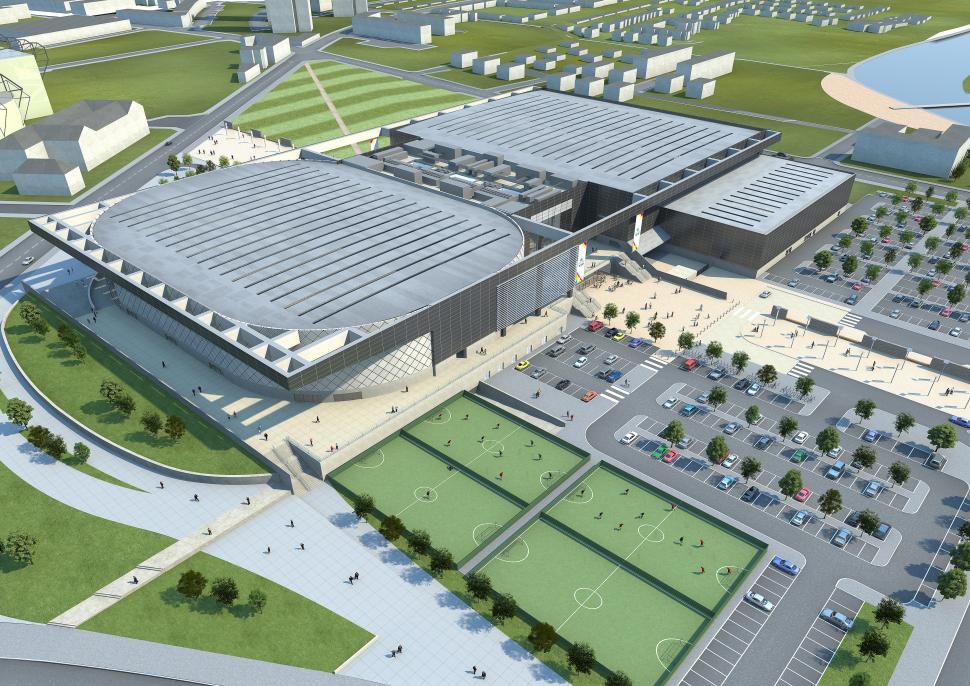 Construction firm Sir Robert McAlpine Ltd is favourtie win the contract to build Scotland's National Indoor Sports Arena (NISA) and  the Sir Chris Hoy Velodrome, which will be used to host two events at the 2014 Glasgow Commonwealth Games. Final approval will be made by Glasgow City Council at an executive committee meeting this Friday.

The NISA and The velodrome will be one of the biggest indoor sports facilities of its type in Europe and will be located on a 10.5 hectare site in the East End of Glasgow, close to Celtic Park and the Commonwealth Games Athletes’ Village.

This will be the principal new dedicated sports facility for the 2014 Commonwealth Games, and will be Scotland’s first indoor velodrome, building on the celebrated successes of Sir Chris Hoy and other Scottish cyclists.

The indoor arena will have 5,000 spectator seats for sporting competitions, while the velodrome will have a further 2,000 seated and 500 standing spectators viewing a 250-metre cycle track. Viewing capacity for the velodrome will be extended to 4,000 for the duration of the 2014 Commonwealth Games, where the venue will host the badminton and track cycling events.

The facility will be a national training centre for athletics, basketball, netball, track cycling and volleyball, and will include Scotland’s first dedicated indoor velodrome, providing elite training and an international competition standard venue.

Councillor Steven Purcell, Leader of Glasgow City Council, said: “The National Indoor Sports Arena and Sir Chris Hoy Velodrome will be world-class venues able to attract sporting competitions of the highest standard to Glasgow, as well as providing a fantastic community facility that presents the chance and challenge to improve health and fitness levels. The design and construction of this state-of-the-art facility will offer employment, training and skills opportunities to local people, and will be a real asset for the city and country for decades to come.”

The velodrome track will be designed by the internationally renowned designer Ralph Schuermann, who designed the 2008 Olympic Games velodrome in Beijing, and the design of the velodrome’s track - and its accreditation by the Union Cycliste Internationale (UCI) - is absolutely key to the success of the Sir Chris Hoy Velodrome as an event arena.

Louise Martin CBE, Chair of sportscotland said: “This is a landmark facility, not just for the 2014 Commonwealth Games, but for the future training and competition opportunities for so many sports in Scotland. Cycling in particular will benefit immensely. Scotland has an excellent track record of producing world class cyclists and this fantastic new indoor facility can only help further.”

The new headquarters of sportscotland will be located on the same site, as will the administrative base of several other national sports, and other features include a community sports centre with sports halls, outdoor floodlit 5-a-side courts, extensive health and fitness provision, indoor roller sports park, provision for cycling and acrèche.

John Scott, Chief Executive of Glasgow 2014 Limited, the Organising Company for the Commonwealth Games, said: “We are focused on delivering an athlete-centred Games in 2014 and the successful delivery of the NISA and Sir Chris Hoy Velodrome will significantly contribute to providing athletes with a truly outstanding sporting experience. These world-class venues will facilitate elite athlete training in preparation of the Games, and leave a lasting sport and economic legacy for people in Glasgow and across Scotland.”