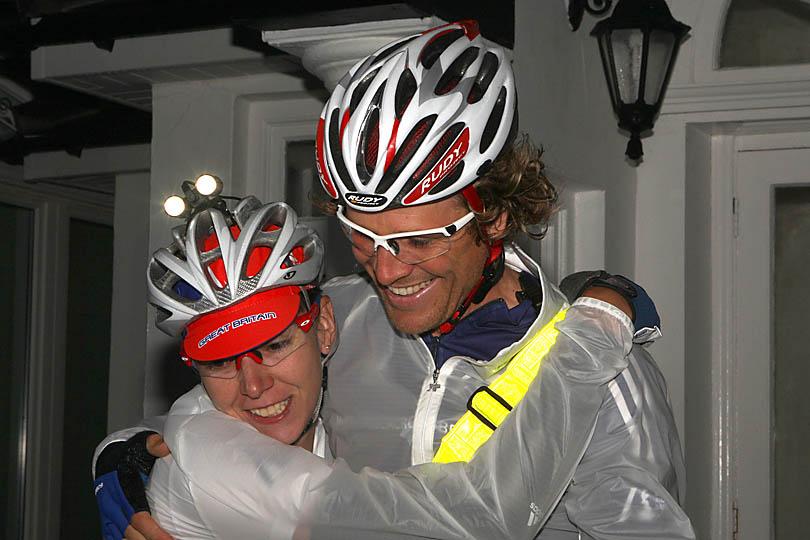 Not content with rowing across the Atlantic and walking to the South Pole, James Cracknell has teamed up with fellow Olympic Gold medallist Rebecca Romero and they set off before dawn this morning to take on the tandem end-to-end record. The current mark is 2 days, 3 hours, 19 minutes and 23 seconds, set in 2000 by Andy Wilkinson and Lynne Taylor. The record attempt marks the launch of the Deloitte Ride Across Britain, which we reported on last week.

The pair are hoping that their lack of tandem experience – best measured in hours – will be offset by their athletic ability and mental toughness that will be needed on the gruelling two-day attempt. Cracknell and Romero are riding custom-built Dolan tandems for the ride: they will swap positions during the challenge and that requires them to have two bikes, something that's allowed in the rules for the record attempt.

“I am always looking for new challenges and the current record is extremely competitive", says Cracknell. "This is set to be both mentally and physically very tough but to break the world record will be a huge achievement - and the perfect way to mark the launch of the Deloitte Ride Across Britain.”

Romero was also guardedly positive about the attempt. “There’s no denying this is going to be hard, especially trying to combat sleep deprivation as we cycle non-stop throughout the night, but I am really looking forward to the challenge", she says. "It would be great to break this record and will be a huge accomplishment for me if we manage to do so.”

Both Cracknell and Romero are well used to pushing themselves to the limit, but this record attempt is certainly going to test them, not least because of their lack of preparation on the bike. We'll comment below to update their progress... keep checking back!