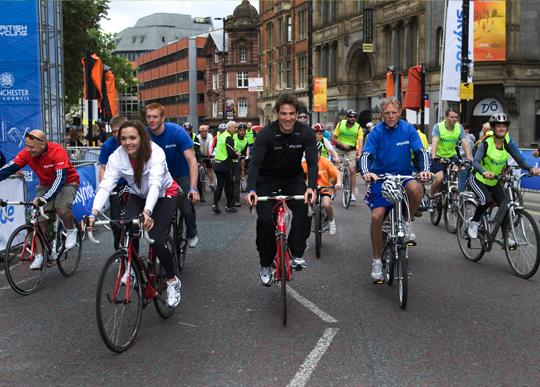 Cyclists take over the roads in Manchester
by Kevin Emery

Thousands of cyclists took to the traffic-free streets of Manchester city centre yesterday as they went wheel to wheel with some of Britain's Olympic heroes.

Skyride Manchester was the first in a series of four city events taking place across the country, encouraging people to get back on their bikes and enjoy the benefits of a fitter, healthier lifestyle.

And 15,000 cyclists of all ages and abilities joined Beijing gold medallists Victoria Pendleton, Jason Kenny and Ed Clancy along the 10km route from Albert Square to Manchester Velodrome in east Manchester and back to the city centre.

Skyride ambassador Gethin Jones was on hand to join in and get the crowd involved - he took part in a BMX tricks lesson along with Great Britain Cycling Team coaches Shane Sutton and Dave Brailsford.

The Skyride scheme builds on Sky’s partnership with British Cycling, announced last summer, and follows the creation of a new professional road-cycling team. Sky has set itself the target of getting one million more people cycling in the next five years.

Sky has launched a new cycling website at www.goskyride.com which will carry news, information and online registration for each of the Skyride events and will feature tips and expert advice on how to ride safely and in comfort.