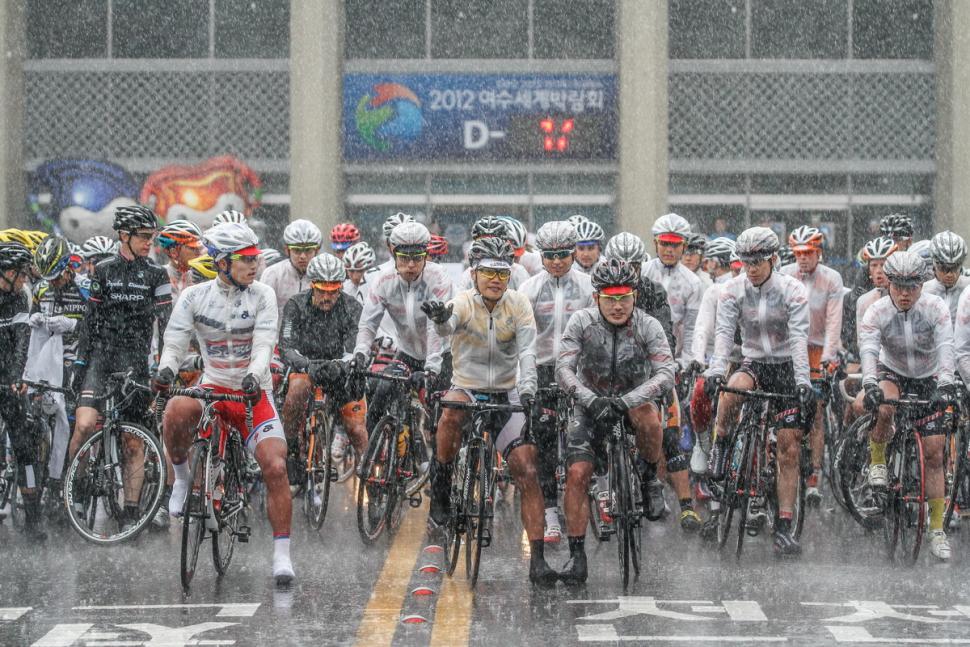 Photographers' motorbikes cause crashes at the Tour de Korea

Rapha Condor Sharp's Kritsian House among riders involved; organisers move to exclude most bikes from rest of race...
by Simon_MacMichael

The Tour de Korea, which yesterday saw the cancellation o the fourth of its eight stages due to torrential rain, was plunged into further chaos today as photographers’ motorbikes were involved in a series of crashes, one involving former British champion Kristian House of Rapha-Condor-Sharp. In a move aimed at ensuring the safety of riders, organisers have said that for the remainder of the race, only the official race photographer and video cameraman will now be permitted to ride on the route.

The drama of today’s stage was reported in a series of posts made on Twitter by Australia-based Cycling IQ, who had been following the stage as a guest of Rusvelo in its team car.

The first incident took place in the neutralised zone when a bike hit four-time Tour de France stage winner Jaan Kirsipuu, now with Champion Systems. That resulted in the stage being suspended, not for the first time today, while the Estonian got a new bike and helmet. There are no details of the second incident, but the third occurred 118.3km into the stage, with 25km left to ride.

Initially it was thought that the motorbike involved, a Harley Davidson, was a police vehicle – it certainly had police decals on it, according to Cycling IQ – but it subsequently transpired that it was carrying a photographer and his local pilot, both of whom were taken to hospital.

Again, organisers suspended racing briefly while team management and riders voiced their safety concerns arising from that incident as well as the earlier ones. A subsequent intermediate sprint was cancelled, and only motorbike marshals supplied from Malaysia, who have experience of bunch racing through the Tour of Langkawi, were allowed to follow the rest of the stage.

After racing resumed, there was yet another crash, this time during the sprint to the line, won by team Type 1’s Alexander Serebrayakov.

Following the stage, Rapha Condor Sharp’s House, who had been involved in that third incident, told Cycling IQ that the motorbike concerned, piloted by a local driver and with police decals on it, "was weaving in and out of riders on the climb, coming on the inside of us on corners."

House explained that the motorbike had clipped his hand and that while he managed to stay upright initially, his momentum took him into ISD-Neri’s Yuriy Agarkov, who crashed.

Cycling IQ reports that following the end of the stage, organisers issued a statement in which they said: “No photo bikes will be permitted on the course except for the official race photographer and official video bike" and that “2 ambulances and a medical team will join race for the rest of the event. Event will be covered by 4 ambulances.”

They added: “Only motor marshals under escort of Marshals #1‐#4 (hired from Malaysia) will be permitted to pass bunch.”

Early signs are that today’s incidents in Korea resulted from the motorbike pilots involved having limited experience of riding in a race situation.

As was highlighted during the incident in last year’s Tour de France in which Team Sky’s Juan Antonio Flecha was clipped by a car carrying TV personnel, with Vacansoleil’s Johnny Hoogerland also sent flying into a barbed wire fence, rider safety must be the paramount concern when it comes to vehicles, whether cars or motorbikes, following races.

The Tour of Flanders earlier this month saw several incidents in which team cars became boxed in by riders at certain points of the course, showing the need for drivers to anticipate the road ahead and ensure they are not in a position in which they can pose a risk to competitors.

Even in the biggest races with experienced moto pilots, cyclists can often be seen swatting away TV motorbikes that have got too close while trying to capture the action, while commisaires strictly regulate when and how bikes carrying photographers may move through the peloton to enable pictures to be taken, although that does not appear to have happened today.