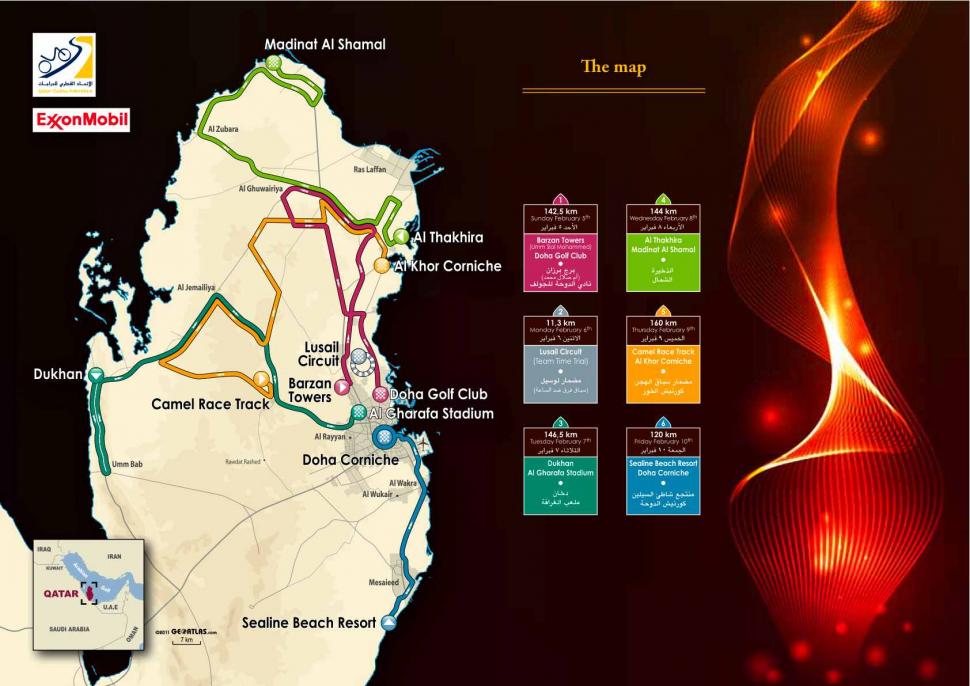 Tom Boonen has won his 20th career stage of the Tour of Qatar to consolidate his overall lead in a race he has won three times in the past, and with a lead of more than half a minute seems set to take his fourth title. Only five riders contested the sprint finish in a tailwind, with Tom Veelers of Project 1T4i second and RadioShack-Nissan's Fabian Cancellara, who went for the line early, third  on another day when the wind played havoc with the race. Team Sky's Juan Antonio Flecha and Boonen's team mate Gert Steegmans rounded out the quintet.

Going into the last 10km, just 16 riders were left in the front group, with yesterday's stage winner Mark Cavendish of Team Sky among those missing, but an attack by RadioShack-Nissan's Cancellara 5km out whittled that group down further.

Initially, only Adam Blythe of BMC Racing was able to go with him, but the young Briton suffered a puncture at a critical point and with the leaders zipping along, there was no hope of getting back on.

Another to drop off the leading bunch in the closing kilometres was Garmin-Barracida's Tyler Farrar, who had started the day second overall. The American remains Boonen's closest challenger for the overall, but there are now 31 seconds between them.

“I told the guys I was feeling strong today and it was a perfect day to really take the jersey,” said Boonen afterwards, outlining how the team had set out to use the wind to its advantage to ride hard and distance some of his rivals.

“We had a good team today on a perfect stage for us,” he added. “Like I said yesterday, trying to win one more stage would be very important for the Tour of Qatar, today was a very good day.”