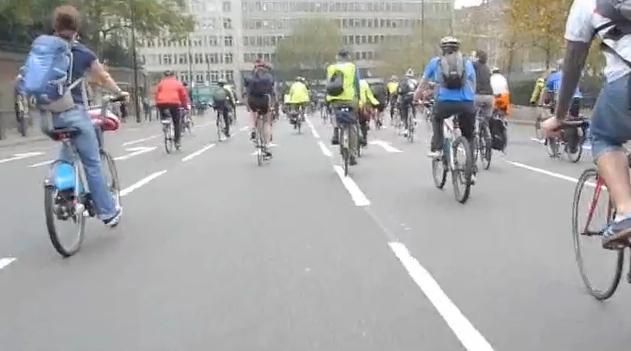 Hundreds of everyday riders turned out for Saturday's tour of London's blackspots. One of them tells us why...
by Simon_MacMichael

When he first mooted the idea last month of a ride around London’s ten most dangerous junctions, Cyclists In The City blogger Danny Williams said: “I hope perhaps 40-50 people will turn up.” As it turned out, getting on for ten times as many joined Danny and Mark Ames of I Bike London for what had been renamed the Tour du Danger.

With three cyclists killed on the capital’s roads since the start of October, the ride had struck a chord not only among cycling campaigners, but also ordinary cyclists who use their bikes for getting around the city and want to do so without being in fear for their lives.

One of those hundreds of everyday cyclists, Richard Leeming, who passes through several of those junctions during his commute to work from South London into the city centre each day, filmed Saturday’s ride, providing a running commentary as it passed from one blackspot to another.

Richard outlined to road.cc the reasons behind his getting involved in the ride, as well as sending a message to Transport for London (TfL) and Boris Johnson that will no doubt be echoed by all those who took part.

“I've been cycling in London for decades and recently the atmosphere around cycling seems to have got worse,” he explained.

“As the number of cyclists rises what's been frustrating is TfL's seeming refusal to take us seriously and build decent, safe, segregated infrastructure. They're fiddling while cyclists die.

“Meanwhile Boris Johnson, our so-called ‘cycling mayor’ seems to think that blue paint and your "wits" are enough ... They're clearly not.

“So when I read about the Tour du Danger on the Cyclists in the City blog, I was keen to join as it seemed like a reasonsable, sensible and proactive way of highlighting the dangers cyclists face and the authorities’ failure to take proper action.

“The ride itself was a lot of fun, I met some really nice people and it was immaculately organised. My thanks go to the organisers and I'm looking forward to the next one in March.”

That ride, which promises to be even bigger, is scheduled for March 17, and thanks for Saturday's ride are also of course due to the many marshals drawn from London Cycling camapaign branches who helped ensure that the event passed off smoothly.