No matter that the days are still long and the sun shining, Italy's home trainer maker still needs to launch its new range.
by nick_rearden

It's no fun at all thinking about indoor training while the Tour de France is still on but that is exactly what we were doing last week; looking at Elite's new rollers and home trainers in readiness for the coming blizzards and floods.

There are a couple of nice trainers to add to the Italian company's existing extensive range along with a special heat-resistant rear tyre named Coperton for £29.99. And nice and showy was a Tricolore flag version of Elite's Arion rollers for the same price as the standard red for £199.99. These are going to be in short supply, so if you're a fan of all things Italian, you'd better get your order in quick.

The big news, though, is the latest - deep breath - SuperCrono Forte Wireless Digital Trainer. The first thing that grabs you is the dinky iPhone-sized quick release handlebar display which, as the name suggests, needs no connected wires or cables trailing around looking untidy. You get to see Speed, Distance, Heart Rate, Cadence, Time and Wattage in large, clear numerals and the really clever bit is that your bike requires no additional sensors, the cadence measurement coming from sensors in the resistance unit. The display unit is also Ant+ compatible so your Heart Rate Monitor chest strap will work as long as it conforms to the Ant+ standard - e.g. latest Cateye or Garmin and plenty of others but not Polar. 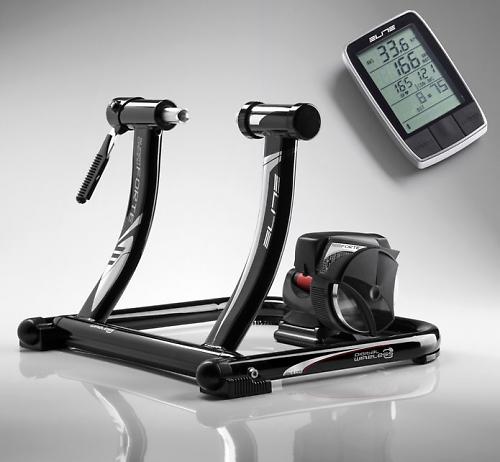 The resistance unit is a variant of that found on the existing but pricier RealTour Reality trainer which works on the magnetic induction principle. The good news is that it's quiet with the potential bad being that it should suffer from the same issue as other magnetic units - i.e. the increasing resistance is linear, meaning power-users tend to run out of top-end resistance. The problem is mainly allayed here, though, by the magnetic opposition being produced electrically - it needs a power supply, therefore - and controlled electronically with Elite claiming that the resistance range is wider than anyone's and furthermore controllable in 16 steps.

Elite is also claiming that the contact between roller and rear tyre is automatically optimised for each rider, which has a large bearing on heat build-up and resultant wear. Noise and vibration being further helped by the so-called ElastoGel material of the roller itself. Price is £399.99 and they'll be available 'soon'. 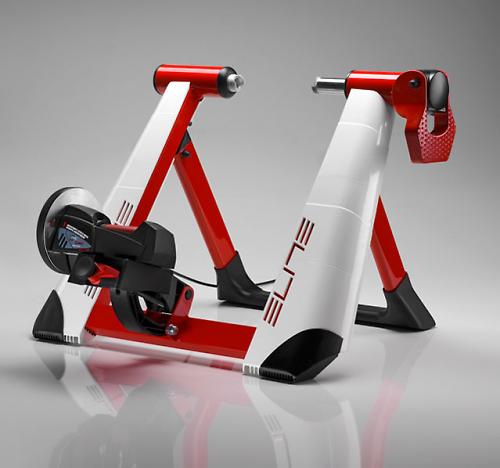 For a much less committed £179.99, you will soon be able buy the Novo Mag Trainer. Elite claim that a far wider range of wheel sizes will fit in this new model, which has been achieved by both moving the magnetic resistance unit to the rear and then designing the foldable support to be asymmetric. A useful by-product of the new shape is that as long as you're using the most common 700C-size wheel - or, indeed, 29" mountain size - the spinning wheel is held much closer to the ground, making a front wheel support unnecessary and lowering the stand-over height. With five resistance levels - in addition to all your on-board gears, obviously - Elite is also saying that the maximum effort required is 13% higher than that offered by the equivalent unit from that other trainer-maker beginning with 'T'. You also get the fancy ElastoGel surface on the roller.