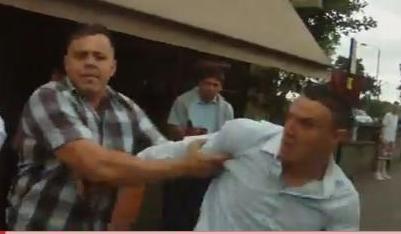 Police investigation has stalled, can you identify attacker?
by Mark Appleton

The Metropolitan Police’s willingness to investigate clear wrongdoing has been severely criticised in light of the News of the World phone-hacking scandal.

Of course it would be good to think that was a one-off aberration under a previous Met. regime and one that had something to do with an unwillingness by detectives at the time to expose a culture of receiving press backhanders amongst their colleagues.

Things are different now. But take a look at this video and read the account on our forum posted by the road.cc regular who was the victim of the assault, about both incident and the police’s attempt to bring the attacker to book.

Although the registered keeper of the car was easily traceable it seems that on the day in question the vehicle was left unlocked with the keys in the ignition, only for it to be taken without consent but somehow later returned to the owner by person or persons unknown.

Could happen I suppose, after all there are some very considerate, violently thuggish car thieves out there who sometimes repent and, racked with guilt, simply return the stolen vehicle to its rightful owner completely undamaged.

In which the case the registered keeper will no doubt be keen to help track down the person filmed in the assault in order to thank them for seeing the error of their ways, at least in terms of the return of the car, if not the attack on a cyclist who was hardly in a position to defend himself.

What we can say about the assailant is that he looks about 30, medium height and build, possibly married judging by the ring on his left hand, bit temperamental, fancies himself as a hard man (with his mates in tow of course), punches like a girl.

UPDATE: The Metropolitan Police tell us that this case remains the subject of an on-going investigation by  detectives from Bexley CID. We will, of course, bring you news of any further developments as and when they occur.