In part 2 of our canter through the Charge 2012 range we look at four completely new bikes, and see what 2012 has in store for two of the stars of the 2011 range, the Mixer and the Tap. The four new bikes are all urban models the Scourer and Zester combine the two areas in which Charge have excelled in recent years – mountain bikes and urban bikes while the Decanter and Mandoline build on what has been achieved with the Hob women's bike, but with added utility – check those wicker baskets. 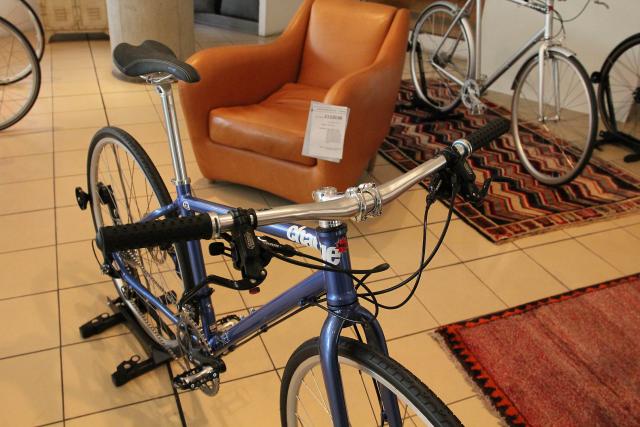 Whoah! Look at the size of those bars! You won't be filtering through traffic with those bad boys… As it happens, they won't be so wide on the production version… closer to 600mm rather than 700 and with handy increments so you can cut them down further if you want. According to Ash from Charge the idea here is to get away from those ultra narrow bars favoured on fixeds and go for something a bit more roomy a style of bar favoured in mountain biking circles at the mo. Mission accomplished on that one. 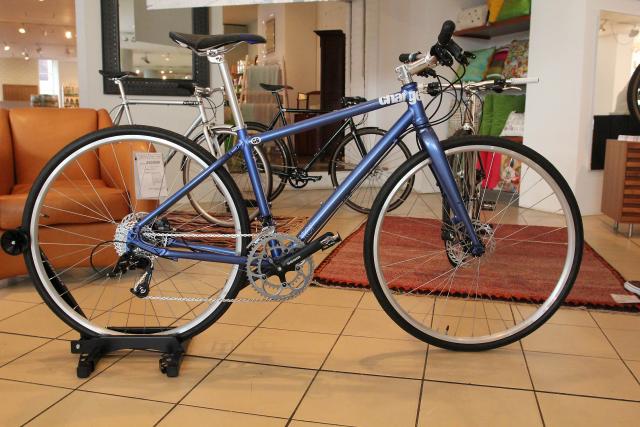 With the Scourer and the Zester Charge bring their mountain bike roots to the city. Whyte blazed this particularly trail last year with their successful range of mountain bike inspired urban machines – bikes that were not unfamiliar to the Charge chaps I talked to at the launch. It has to be said that given their pedigree the Scourer and Zester are obvious next steps for Charge, the word is they wanted to make bikes for mountain bikers to ride on the road… well, they are mountain bikers. 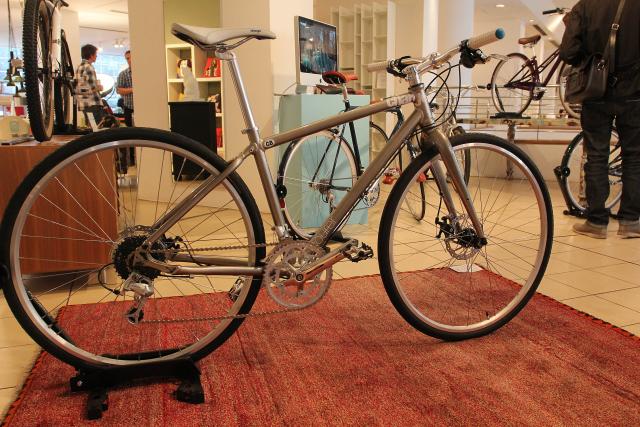 In many ways the urban bike comes full circle with these machines – back in the 90s the machine of choice for many city riders was a slicked up rigid mountain bike, tough, reliable and those 26in wheels were fast away from the lights - the downer was that some of those bikes were heavy and while 26in wheels are good for strength and acceleration, a 700c wheel rolls over crappy road surfaces better and it eats up the distance better too, useful given that the UK's urban sprawl is quite big. Of course stick some 700cs on a mountain bike frame and you've got yourself a hybr… urban 29er.

So what do you get for your money? Both bikes share the same 7071 aluminium frame and alloy fork combo, and both get Charge Sponge saddles, those Charge Shield bars and stems, and Continental Sport Contact tyres (for production models). And the differences? The Zester gets Sram Apex 10 spd, while the Scourer gets Sora 9 spd, the Zester also gets better hubs, and Avid Elixir 1 hydraulic discs compared to the Scourer's Tektro IO cable discs. Both bikes come with all the necessary eyelets and mounting points for mudguards and racks. Projected prices are: £599.99 for the Scourer and £899 for the Zester. On paper at least we're thinking the Scourer looks a bit of a bargain. 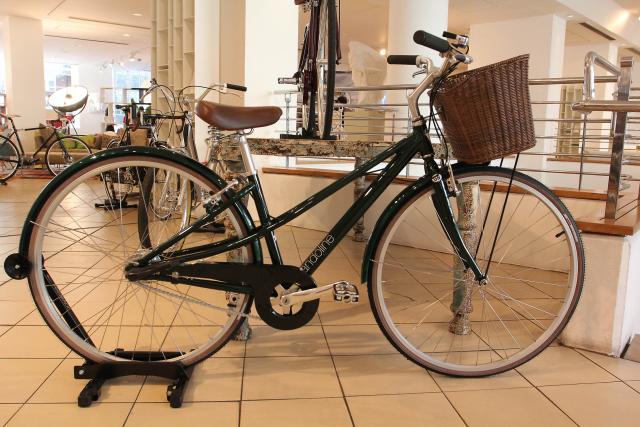 As I well know for some women the main requirement of a bike is that it looks nice, doesn't have too many gears and above all very much DOES have a basket on the front… that you can carry stuff in, and, oh, and it doesn't want to cost too much either. That does sound like a recipe for a pretty cool bike and is a formula that has served Pashley pretty well over the years. If I had a pound for every time my teenage daughters had asked for such a machine I'd have at least enough to buy the basket.

Anyway Charge have now done their bit to meet this womanly need with the Mandolin and the Decanter, Sturmey Archer and basket equipped 5 and 3 speed's respectively. In many ways they are aluminium versions of the Hob and I suppose relate to the Scourer and the Zester in a similar way as the Hob does to the Plug. Like the Hob the Mandoline and Decanter have Mixte frames, in their case made from 6061 aluminium, with a steel fork and a steel chaincase, and colour-co-ordinated mudguards and a well sprung comfy looking Brookesque saddle. 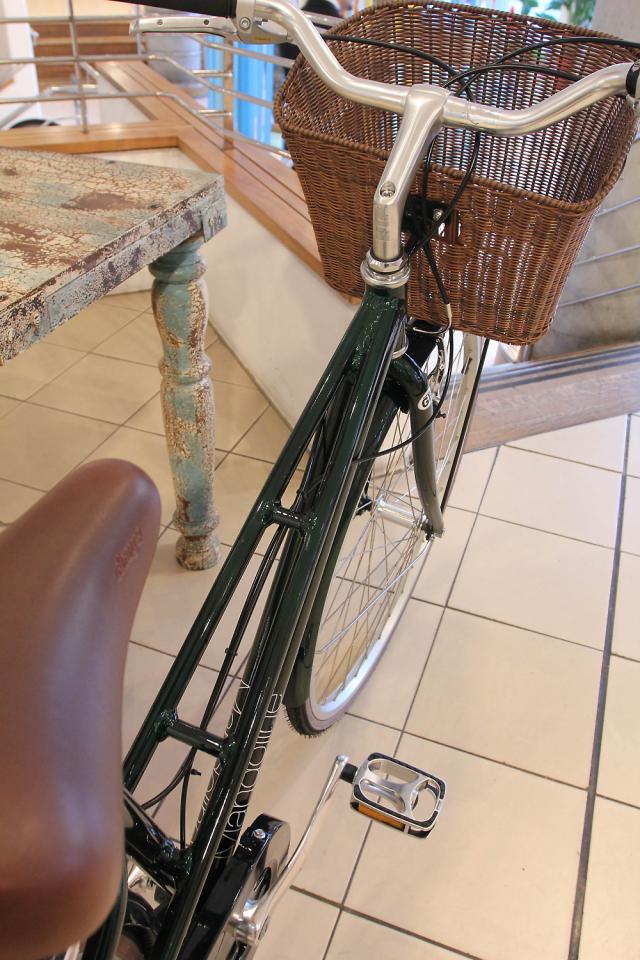 That basket is pretty big and should take a fair amount of stuff. Braking comes courtesy of Tektro Vs front and rear – which should be more than up to the task. Both at least look like they should offer an attractive combination of utility, style and value for money. Which sort of begs the question, why not do a male version with a delivery box or similar on the front? Looks, style and utility being a combination with a gender neutral appeal. 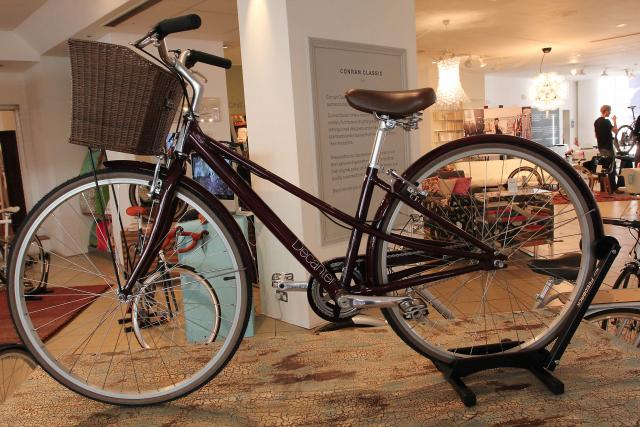 The Decanter will set you back £449.99 while those two extra gears on the Mandoline push the price up to £479.99, but check that verrrrry nice looking new 3-spd thumbie on the Decanter. Sizes range from XXS through to medium. 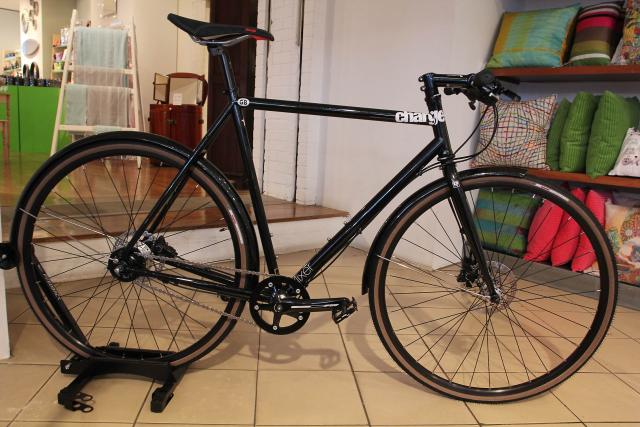 Clean lines like a fixed, but with gears and minimal maintenance what's not to like about the hub geared urban bike? Not a lot it turns out if Charge's experience with their 2011 versions of the Tap and the Mixer are anything to go by. Both bikes were big stars of the Charge range especially the more affordable Tap, and the Charge guys reckoned they could have sold up to five times as many Mixers - if they could have got hold of enough Shimano Alfine hubs. While they may not quite be as rare as rocking horse shit, Shimano's highly regarded hub gear is still fairly thin on the ground. 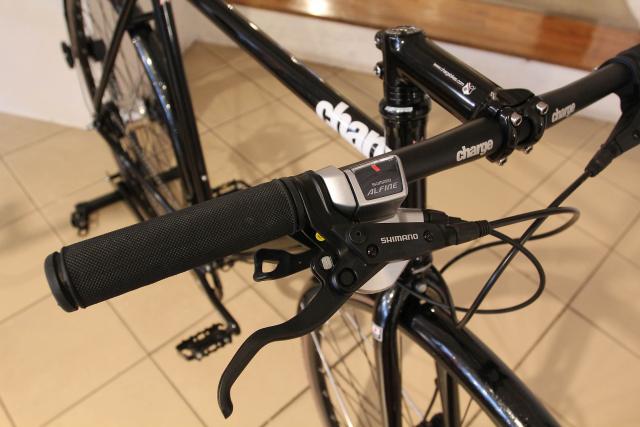 For 2011 year the Mixer was on offer in two flavours, 8-spd Shimano Alfine, and the new 11-spd Alfine hub. For 2012 it's 11-spd only but the price drops slightly to £1199.99… let's call it £1200 shall we. The only noticeable spec change, well the only one I can spot while separated from my notes is that last year's Alfine 39T crankset makes way for a Truvativ AKA 1.1 plus last year's Mixer came shod with Conti Sport Contact rubber while for 2012 it'll be Kenda Coasters, those two changes would account for a chunk of the price saving then we'd guess with minimal effect on performance. The Mixer frame remains Tange Prestige Cro-Mo for 2012 though it gets an irradescent black paint job, instead of last year's silver one - the full complement of guards, bottle bosses and rack mounts are still present and correct making for a very versatile urban machine that also offers the possibility of venturing out beyond the city limits too. 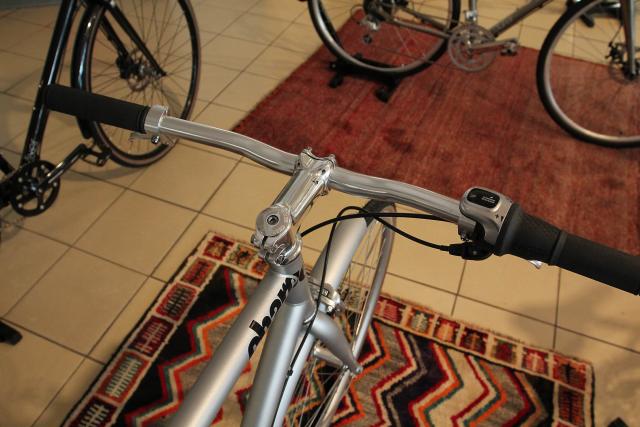 Prices go up on the Tap by £50 from £649 to £699 and there are a few spec changes in the mix too. As with the Mixer tyres change from Conti Sport Contacts to Kenda Coasters and if they launch bike is anything to go by it'll be coming decked with those wide risers that feature on the the Zester and Scourer. 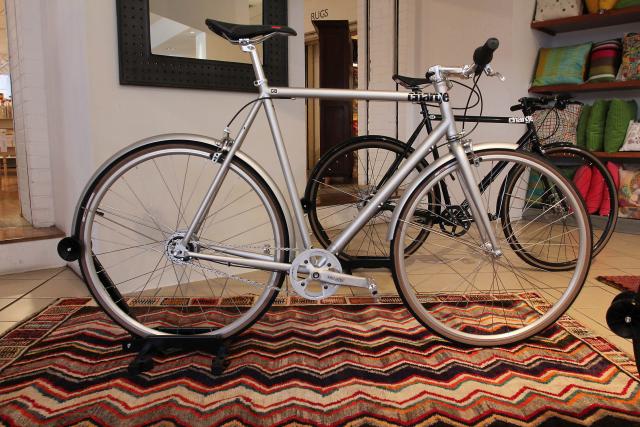 The colour scheme changes for 2012 from white to brushed silver and there's a very nicely matched Truvativ crankset in the same finish to got with it. The frame remains plain guage Tange Chromoly and while most of of Charge's urban bikes come disc equipped the Tap sticks with tried and true Tektro calliper brakes – which helps keep the weight and price down, but at the cost of some stopping performance… it will stop mind. 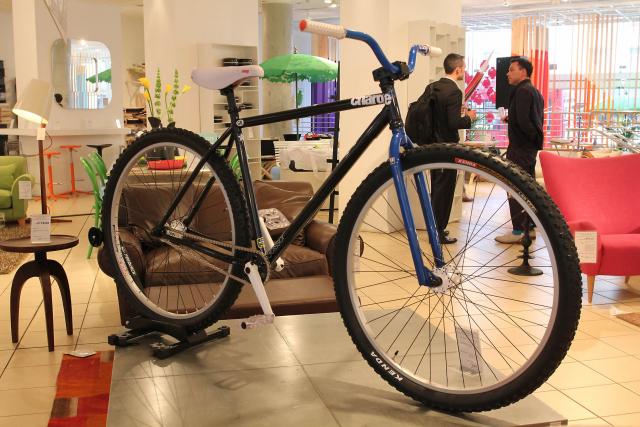 Last but very definitely not least is the attention grabbing Charge Scissor. The Scissor is not completely new to the Charge range but for the last two years it's been sold as a frameset only. For 2012 Charge it comes as a complete bike - partly filling the the gap left by the Plug Freestyle, but taking things on a level. 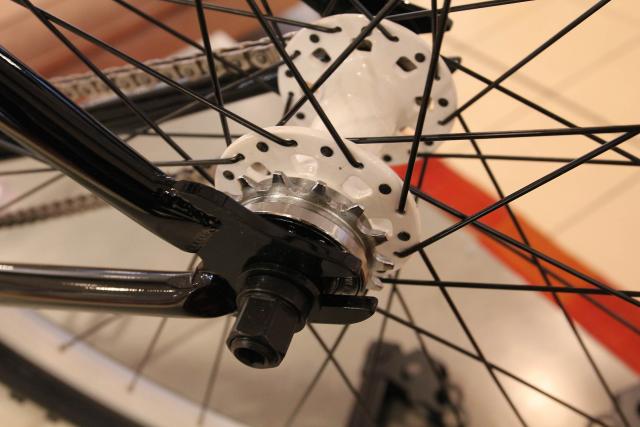 While 26in wheels now feature on the more specialist freestyle fixed machines the Scissor sticks with 700c wheels, Charge reckon that gives it a tad more all round appeal, it's also got a mid-BB rather than the negative bottom bracket that many of the 26in machines go for, even so it very much reflects the trend of freestyle bikes moving towards the point where MTB jump bikes meet BMX… In effect this is an urban 29er BMX jump bike. Well, someone had to do it. The 28 - 10 drivetrain is straight out of BMX - the hubs were developed by BMX outfit We The People and rear is technically a flip flop hub courtesy of a 14T freewheel there was some debate as to who would use that at the launch, there was certainly one taker - although he had plans for taking the Scissor off-road. In fact it is main role is to ensure that the Scissor meets BS6102 and CEN regs. 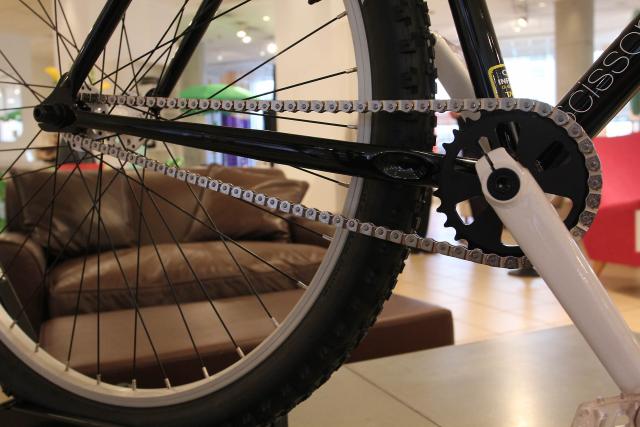 The production version of the Scissor won't have the Kenda tyres that featured on the launch bike instead they will come with WTB Nanoraptors a lower profile, rounder tyre that doesn't have such an aggressive shoulder tread on the production version. The production frame will also have an even more steeply sloping top tube. In fact the frame will change quite radically from the more stretched out geometry of the original frameset.

If the Scissor isn't the future of jumping your bike of bits of municipal street furniture it is at least of pointer of things to come.

1
'She is frozen in time' Father pays emotional tribute to daughter killed by unlicenced HGV driver
2
Police chief admits force 'mishandled' investigation into teen truck driver who hit six cyclists
3
Coroner criticised for claiming there was 'nothing practical' he could do to prevent a repeat of fatal collision
4
What can be done about the latest spate of bikejackings? Plus red light-jumping cyclists, 'The Rules' + more on episode 9 of the road.cc Podcast
5
Questions remain regarding the delay in Specialized's Tarmac SL7 recall
6
Patent granted for chainset that “improves cycling efficiency by more than 4%”
7
Driver admits killing two cyclists in A40 crash through careless driving
8
Near Miss of the Day 644: Skip lorry driver almost hits two cyclists