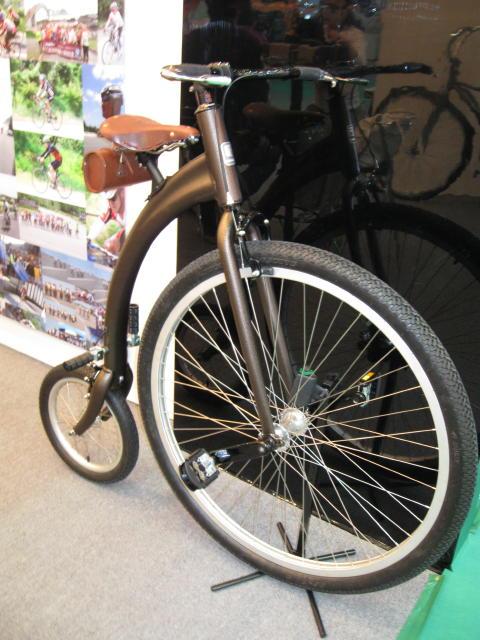 Fixed gear, retro caps, waxed moustaches… the past is the future
by Tony Farrelly

Long after it was consigned to the scrapheap of history the penny farthing bicycle is poised to make a dramatic comeback – reinvented for the 21st century by some of Britain's top bicycle designers. The race is on to be the first to get one of these bikes to market, and we've been lucky enough to get a behind the scenes glimpse at one of the new machines – the Charge Mangle.

The first thing that strikes you about the Mangle is that it is smaller than the pictures you usually see of old penny farthings – there are a number of reasons for this first off safety, it is very unlikely that a full-sized old school penny farthing would pass the necessary CE standards to allow it to be sold legally in this country. The other equally basic problem with building replicas of the 19th century machines is that bike factories, shops, and distribution centres are all set up to cope with bikes of a standard modern size the old ones simply wouldn't fit.

That said get in the saddle and you are significantly further off the ground than you would be on a normal bike – one of the big advantages sited for the 21st century penny farthing is that it gives the rider a much clearer view over traffic, but unlike it's 19th century ancestor there is a lot less further to fall should you take, what was called back in the day, a header. It does feel more than a little weird but again the differences in the wheel size isn't quite as pronounced as on the original 19th century bikes with the smaller wheel either a 24in or a 20in depending on the size of bike. On the orginal bikes the size of your front wheel was determined by the length of your inside leg, that isn't quite the case here, the introduction of a modern seatpost allows for a standard 50in front wheel.

Those wheels are much lighter too the small wheel at the back is basically a lightweight version of an MTB jump bike wheel while the front rolls on what looks like a Shimano 105 hub matched up to some very long spokes and specially built Charge rims.

The Mangle is significantly lighter too a medium-sized Mangle has a claimed weight of just over 26lbs. Charge have stuck with steel, but other manufacturers are using different materials: Specialized and the German company Storck are both said to be using explosion formed aluminium to benefit from the material's lightness and strength and explosion forming's ability to create strong curves and fluid shapes; Giant are said to be using their advantages in accessing carbon fibre to build an ultra-strong, ultra- lightweight machine.

The last few years have seen an explosion in retro cycling technology and fashion: fixed gear bikes, waxed moustaches and retro cycling caps are all favoured by the cycling 'in-crowd' and a number of bike firms have been asking themselves, what next? Fixed gear bikes may be very off the moment but it's often forgotten that as fashions go this was a very slow-burner indeed. Couriers across the world were switching to fixed geared bikes in the early and mid-90s and many bike manufacturers dismissed the movement as too niche and subsequently missed out. This time they are determined to be in at the start keeping a close eye on the extreme margins of cycling fashion.

According to a senior marketing executive we spoke to at one of the world's biggest bike companies they became aware of a sudden upsurge of interest in replica ordinaries (the proper name for a penny farthing) ironically the were alerted to the this when some of the small Czech firms who build the bikes became overwhelmed by the sudden upsurge in orders from buyers on the US West Coast, Japan and in particular Barcelona and approached some factories in China to help with the overspill.

Charge are up against some very big players in the race to get the first bikes in the shops with industry rumours talking of whole factories tooling up in China to produce new style machines however they are confident that they will have the Mangle in the shops first, they've kept production local and their design relatively simple eschewing the complex hub gears we are promised on big name rivals that won't debut until Eurobike, for either a simple Sturmey Archer 3 speed hub especially retro-fitted by Sun Race or for the ultra purists a flip flop singlespeed hub.

The Charge insider we spoke to bullishly predicted you would be able to buy a Mangle from your local Evans “before June and you'll see sponsored riders on them before then”. And the likely price? £750.