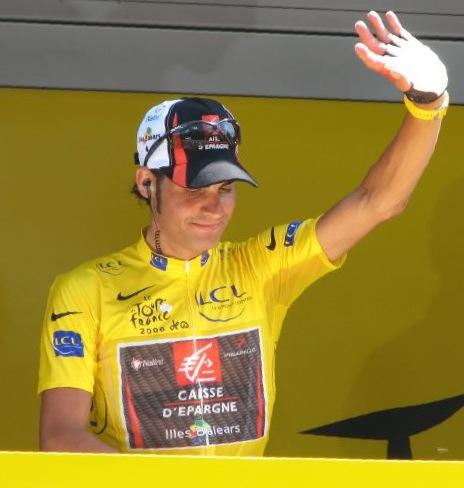 Oscar Pereiro, winner of the 2006 Tour de France after Floyd Landis was stripped of the title, says that the absence of a middle verdict between guilty and not guilty risks Alberto Contador suffering an injustice should he be banned following his failed drugs test in last year’s race. By coincidence, Pereiro’s comments come in the same week as Landis claimed in an interview that the Spaniard had admitted doping during that ill-fated 2006 edition of cycling’s biggest race.

While it has been widely reported in the cycling and other press that Pereiro has maintained, “I say he [Contador] is innocent,” the words attributed to him by Spanish sports daily Marca – “Me dicen que es inocente” actually translates to the rather different, “They tell me he is innocent,” followed by, “but he can’t prove it.”

As reported by Marca following this week’s launch of Movistar Team, Pereiro, who retired at the end of a 2010 season spent with Astana, said that former team mate Contador’s case “will be one more that ends up with an injustice” because the current system has no middle ground between a verdict of “guilty or not guilty.”

Contador continues to insist that his failed test for clenbuterol on the second rest day of last July’s race, which Pereiro did not compete in, was due to his having eaten a contaminated steak, but with no minimum threshold for the substance required under current doping rules, he should be looking at a mandatory two year ban, although reports from Spain last week were that the national federation, the RFEC, was planning to give him a one-year ban.

Such a punishment might well be appealed by world cycling’s governing body, the UCI, and theWorld-Anti-doping Agency to the Court of Arbitration for Sport on the grounds that it was too lenient and that, where clenbuterol is concerned, the rules are clear that a two-year ban should follow.

Pereiro, however, contends that current rules put the rider at a disadvantage. “The issue with Contador is complicated. Things have been going badly for a long time. No-one understands anything, there are some very strange things. Either you are guilty or not guilty, nothing in between.”

According to Periro, “It will be another case of a cyclist who will be punished in an unjust manner,” although whether his solution to what he sees as a problem is to introduce a scale of shorter bans for less black-and-white cases, or something along the lines of the ‘not proven’ verdict in Scottish criminal law, is unclear.

Marca apparently failed to quiz Pereiro on allegations that he had admitted to Landis that he had doped during the 2006 Tour, revealed earlier this week when the website NY Velocity published the full transcript of a seven-hour interview of the American by Paul Kimmage, the Irish former cyclist turned sports journalist, which formed the basis of an article that appeared in The Sunday Times at the weekend.

In that interview, Landis claimed that on his storming (and subsequently revealed to have been drug-assisted) ride on Stage 17 to Morzine in which he took the yellow jersey back from Pereiro, he had no qualms about cheating because he knew that other members of the peloton including, he alleges, the Spaniard, doped themselves.

“I haven’t said this before because no one has asked but if I had any reason to believe, and didn’t have specific knowledge that Pereiro was also doped, then I would have felt like I was cheating somebody but I knew it, I had seen it first hand,” explained Landis, who had ridden alongside Pereiro at Phonak in 2005.

“It also made it a lot harder to deal with when everyone pointed at me and Pereiro was talking about how bad it was that I had robbed him of standing on the podium – that was really hard to deal with,” continued Landis. “I mean, not to go on a tangent here, but people’s opinions didn’t really affect me as long as they were consistent but the hypocrisy was probably the worst thing I had to deal with for the last four years.

“I didn’t care if he was lying, I just didn’t want him pointing fingers at me and saying I robbed him. There was no doubt in my mind that whoever I might have kept off the podium, didn’t belong on the podium.”

Landis revealed to Kimmage that he and Pereiro had apparently talked openly about doping during that year’s race, an allegation that the Irishman greeted with an expletive, followed by the words, “That’s astonishing.”

Asked if he felt pressure going into the final time trial of the 2006 Tour, Landis said, “Yeah, exactly but I was relatively sure... I mean, I know Pereiro and I know he wasn’t going to have any new tricks that he hadn’t already tried so… I had talked to him about it and he told me that he had another blood transfusion to do but I still wasn’t concerned because I was a better time triallist than him regardless…”

He continued; “We talked openly about this in the peloton, that’s why I couldn’t believe no one did this before I did it. We literally just spoke openly; he did a blood transfusion and some artificial haemoglobin.”

To Kimmage’s immediate response, “You’re kidding me!” Landis added: “Yeah, and then he threw me under the bus (laughs) and I put up with it for four years!”

Pereiro, like Landis, has now put his career as a pro cyclist behind him and is concentrating on trying to get a career going as a professional footballer, making his debut before Christmas for the Galician side Coruxa FC.

The 33-year-old admitted that he wasn’t first choice on the team sheet yet, but he hoped to secure a position. He added: “Mountain passes do more damage to the legs than kicking a football.”