Well we're back in the office now and the high from the Honey Stinger waffles has worn off, so it's time to knuckle down and tell you what we saw. If you missed the first roundup, the Merckx EMX-7 or the Kinesis Gran Fondo Ti then don't forget to look at those too. We're still rooting through the pics from day two and we'll get them up later today, but in the meantime here's what Traitor, Thomson, Northwave and Campag were up to... We're always pleased to see the Traitor bike range, nice looking machines that they are. And the good news is that the bikes are now here, so you'll be able to get one soon enough; so far there's about 20 dealers signed up across the country. We're certainly going to get one in, we've put our names down for a Luggernaut in its three-speed guise for starters. There's not a single bike in the range we wouldn't like to have a go on though. 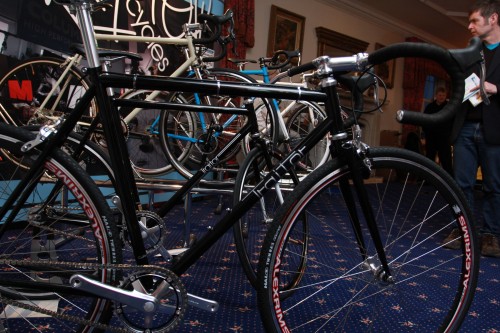 There was even a Traitor we hadn't seen before, the Cutlas singlespeed which comes in at the bottom of the range for £649 complete or £299 for frame and fork. It's TIG welded rather than fillet brazed like the more expensive Ringleader (£399 frameset, £750 complete), and made from 4130 Cromoly rather than Columbus tubing. It's still double butted though and it's nicely made. The singlespeed CX bike, the Crusade, was also at the show, as was the Exile which is a traditional lugged steel winter training frame. That'll set you back £499 for the frame and fork. All Traitor frames come with a five-year warranty, and they all feature stainless dropouts. Traitor also offer a build kit option, so if you're repurposing an old frame you can get everything you need to build it up in one go. 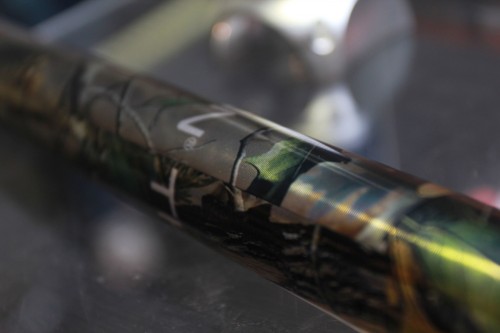 Anodising up until now has been a block colour process, but that's all about to change. Possibly. Thomson have been experimenting with a company in the US that can anodise patterned designs to a high level of detail onto Aluminium components. At the show they had a leaf-motif seatpost – the design of which came from another job the anodising company was doing for a hunting bow company – and a stars and stripes one too. Instead of using a vat of dye the new process uses a transfer process to get the dye into the anodised part before it's sealed. The stars and stripes seatpost was a limited run of 40 for the US national team; Thomson are also running off 65 Union Jack seatposts for the exclusive use of Team GB. obviously they won't fit into certain of the bikes but expect to see them cropping up on the track and the road over the course of the year, as well as on the bikes of the MTB team. Whether or not Thomson roll this process out into production units will depend on demand, and whether it turns out to be cost effective. 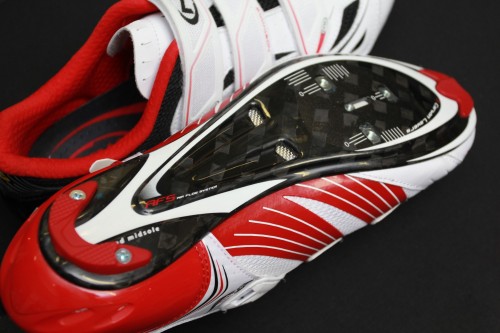 Northwave were keen to show us the shoes that shouty pro team LEOPARD TREK will be wearing this year. They've got the Typhoon shoe for training but most of the riders will race in the Evolution SBS, Northwave's top dollar show. The sole is a three-layer Carbon affair (Northwave did have a five-layer one, but apparently it was too stiff) bonded to a microfibre upper, with two lightweight velcro straps and the Step-By-Step (SBS) ratchet closure. A neat feature of the SBS is that the starting position of the strap is adjustable through four positions, so that if you have to tighten the shoe up a long way (or hardly at all) you can still make sure that the main strap is central on your foot. 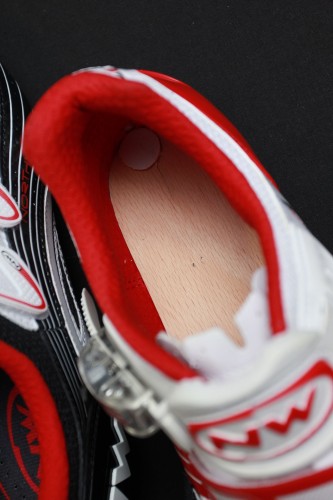 Inside the shoe there's a wooden footbed. Yes, the stuff they make trees from. Apparently it has lots of advantageous properties: it's good at damping vibration, insulates your foot against the cold (and doesn't transmit too much heat either) and sheds stale shoe smells to boot. On top of the wood you can run a choice of three different insoles depending on the shape of your foot, and Northwave dealers can advise you on the best one by using a pressure pad system. 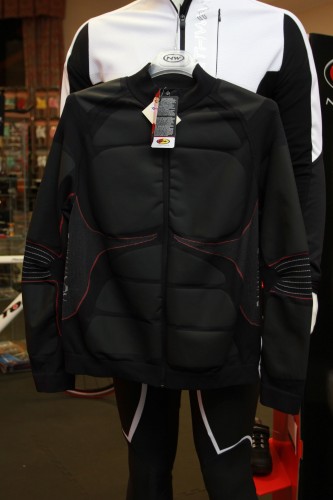 Looking forward to the next winter There were a couple of prototypes on show. The most interesting development was that Northwave have decided that where they're running a waterproofing layer in their clothing, the outside cloth layer is essentially redundant: it just gets a bit wet and weighs you down. To that end they were showing a pair of bib tights with waterproof sections that were rubberised to the touch; Northwave told us the tights are 'wipe clean' though we're not sure how that's necessarily an advantage unless you're a bit messy with your gels. They also had a jersey with waterproof panels which looked... well. Just a bit weird. Sort of like a batman costume. But if that's your thing... Aside from dribbling over Super Record there was only really one reason to be at the Campag stabnd, and that was to cast one's eye over the new Athena 11-speed groupset. Aficionados of the classical style have long been grumbling that you can't get a nice all-alloy 11spd groupset to hang from your Colnago Master X-Light or Wilier Gioiello Ramato, and Campag have listened. Step forward Athena in new all-alloy guise. Chainset, Ergo levers, mechs and brakes without even a hint of the black stuff, but still packing in a lot of the tech from the more expensive groupsets. It's no doubt a bit heavier, but that's not really the point. We're expecting this to fly off the shelves.