We went to ExCel to look at the shiny new yachts. I mean bikes.
by dave atkinson

We've spent a day knocking about at the London Bike Show over at ExCel, and a jolly nice day we've had too. There's lots of biking stuff to see as well as a good helping of outdoors equipment right next door, and it's all wrapped up in the over-the-top opulence of the Boat Show, where champagne and lingerie parties take the place of energy bars cut up into little cubes. At least, if the De Rosa press release is anything to go by. And no, we weren't invited.

January isn't a massively pivotal time in the bike manufacturing calendar so there was plenty of stuff on show that we'd already seen at the back end of last year, but there's always new bits and pieces at every show, and this one is no exception. We're battering home down the M4 in the rain now and it's all still fresh in our minds, so here's some of the stuff we saw... 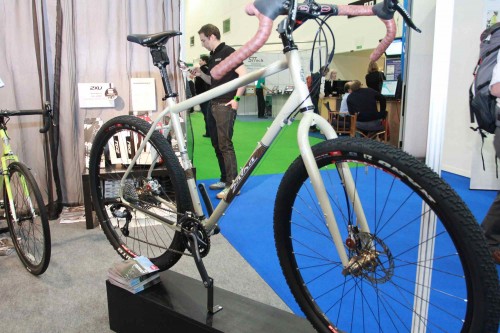 We've got a lot of love for the Salsa Fargo, big-boned drop bar 29er that it is. It's just enough of a road bike with a big dose of dirt-loving MTB thrown in. Last year it was principally marketed as a super-hardcore expedition tourer, this time the emphasis is a bit more on all-round having fun. So out go the bar-end shifters and in come SRAM dual control levers, driving a 2x10 transmission.

You get a Thudbuster seatpost to take the sting out of the rear on the rough stuff – not that the Fargo was ever an uncomfortable ride – and lighter weight stem with Salsa's super=flared Woodchipper bars. Wheels are lighter too with Formula hubs and the bike has natty new woodcut-style graphics.If you're still planning a trip to the back of beyond, you can still carry an unfeasbily large number of water bottles should you so desire. 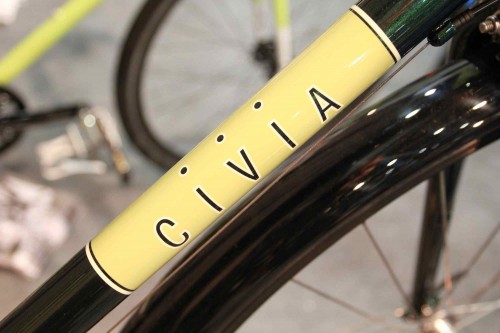 Heard of Civia? Maybe not, but they're out of the same stable as Salsa, Surly and All-City. There'll be a small range of bikes coming into the UK in 2011, of which the grand total of one was on show at ExCel. But it's an interesting one: the Civia Prospect is one of the growing brood of well-apportioned steel light tourers congregating around the magic £1k cycle-to-work limit.

The Prospect won't give you much change ount of that sum, but you get plenty for your money; a nicely finished steel frame decked out with Tiagra/Deore running gear, with the STI levers pulling V brakes thanks to a travel adaptor. A rack and mudguards come as part of the package too, and it's finished in a pleasant metallic green - looks classy. 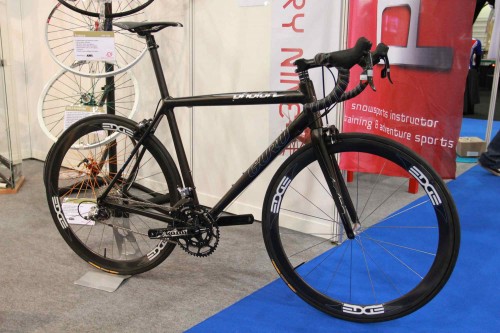 Whilst you might have expected Cervelo's R5CA frame – 60 in the country and they're all sold, we hear – to have been built up into the lightest bike at the show, that honour was actually resting on the shoulders of the Guru Photon, which tipped the scales at 12.2lb built up with SRAM Red and Edge Composites wheels.

Guru bikes are all custom made in Montreal; the Photon is a sort of pick-and-mix monocoque with all the pieces individually hand laid and formed in the usual way (mould, bladder, heat) before being stuck together and finished off to a high standard. You can pick the geometry to suit and Guru will also tweak the Carbon layup to alter the ride characteristics for your weight and style of riding. They won't do it for nothing though; the Photon as built weighs in at a salty £8,600.

Guru also had the first production model of their new aero road bike, the Evolo-R, on display, and a very slippery looking TT bike too. Currently all their models are custom and built to order (4-6 week wait) but they will be introducing some off-the peg bikes later in the year. 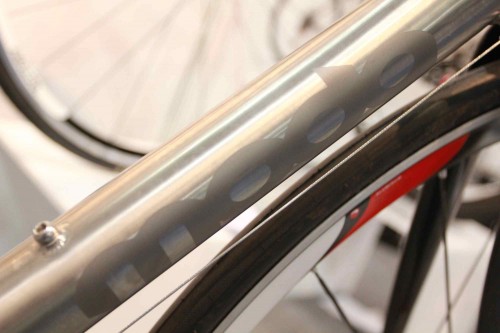 It's been a busy year and a bit for Moda, who have extended their range from 10 to 24 bikes for 2011. You might be forgiven for thinking, judging by the look of the bikes, that Moda's another one of those big European brands making inroads into the domestic market but that's not the case. Moda are UK owned and run and the bikes are designed over here, to suit British conditions. That's very evident in some of the new bikes.

The one that most took our fancy was the Nocturne, a Titanium-framed, mudguard-enabled Sportive/Audax/Winter machine. We haven't got £2300 to throw at a winter bike here at road.cc towers  so we'll class it as more of an all-conditions road bike. The frames are Taiwanese made and the attention to detail is excellent, with the sandblasted graphics and general easy-on-the-eyeness putting us in mind of Enigma, a bit. 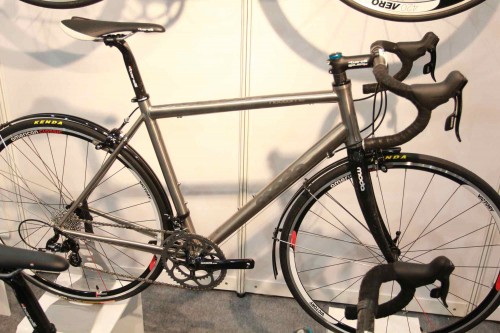 If you want something a bit more affrodable for winter then Moda also offer the Bolero, an Aluminium steed with similar geometry, for just under a grand; not bad when you're getting a £300 American Classic wheelset as part of the package. Moda are using Microshift STI levers on their Aluminium bikes which we're fans of; the 10spd shifters are very capable and a good value alternative to cheaper Shimano units. 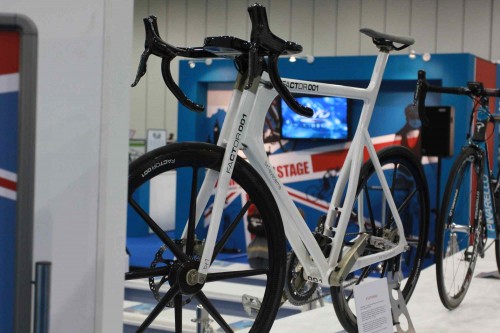 You remember the Factor 001, right? That's the £20k road bike with ceramic disc brakes and all sorts of built-in telemetry, dreamt up by F1 types. It was on the 'Wall of Cool' at the show, along with a nice Team Sky Pinarello and other assorted bling.

That's all well and good, but the question I'm sure you're asking is, "what type of pedals does one fit to a twenty thousand pound bike?" If you had some Garmin Metrigear power-measuring prototypes they might be a good fit, otherwise maybe some Look Kéo Carbons or Speedplay Zeros?" 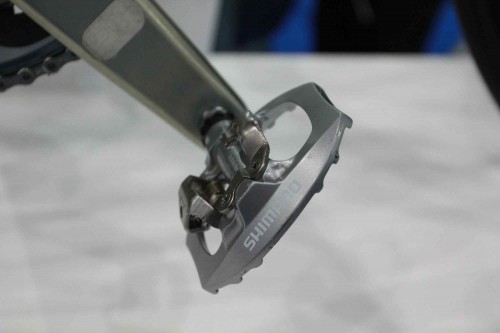 We'll have more from the show later!