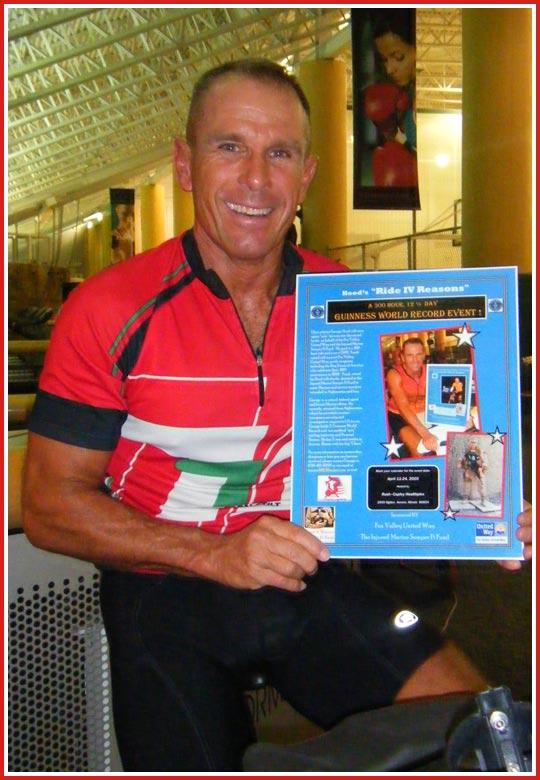 A 52-year-old American has set a new Guinness World Record for pedalling on a stationary bike, spending an incredible 222 hours 22 minutes and 22 seconds in the saddle to raise money for the family of a US soldier killed by an improvised explosive device (IED) in Afghanistan.

George Hood started pedalling on 23 October, breaking the existing record of 200 hours on Sunday evening and set the new benchmark yesterday evening, the third time he has broken the world record in this category.

To put the record-breaking time into context, Alberto Contador spent 72 seconds shy of 92 hours riding the Tour de France this summer, spread over 22 days, while the stationary cyclist set his time over 10 days.

Hood performed his feat at the Urban Tri Gear store in Burr Ridge, a suburb of Chicago, owned by Preston Bokos, a friend of the dead soldier, Gunnar Hotchkin.

According to the Hinsdale-Clarendon Hills Patch website, after Hood broke the 200-hour mark to claim the record, Bokos said, “George, thank you for sitting here all week," to which the cyclist replied “no problem," as he continued pedalling towards his ultimate goal.

Under the rules of the world record attempt, Hood was permitted a five-minute break for every hour he spent in the saddle, the longest break he took being 28 minutes which allowed him to take a 15-minute sleep, using to rest of the time to stretch.

The record-breaking ride, which aimed to raise $25,000 for Hotchkin’s family – he left a wife and three children – was inspired by his own experience in Afghanistan, where according to his website he had worked as a law enforcement professional with a defence contractor, providing support to US troops including investigating groups responsible for IEDs.

Since coming back to the United States in March 2009 , Hood has embarked on a series of world record attempts to help raise funds for the causes he supports.

"I've connected with the family of Gunnar Hotchkin and I'm inspired by his wife and kids who miss him so very much," the record-breaker told the Hinsdale-Clarendon Hills Patch.

"I hope to raise awareness of all of our heroes overseas and move others to donate generously on behalf of Gunnar Hotchkin and his family," he continued.
Hotchkin's widow, Erin, was present on Sunday as Hood broke the record and said: "I'm very honored to have people remember my husband this way. It's really nice to know he touched so many people."