Today’s crazy Vuelta stage the fastest 200km+ bike race in history (+ highlights); US firm in a “Spin” over its claim to have trademarked the word; Doping – a Viz reader writes; Watchdog bans Deliveroo bike delivery + more on the live blog

At 219.6km, today’s Stage 17 of the Vuelta was the longest of this year’s race – and at an average speed of 50.63kph is thought to have been ridden at a faster pace than any 200km-plus road stage or one-day race in the history of professional cycling.

It’s also the fastest stage in the Vuelta during the past 15 years, eclipsed only by Stage 9 of the 2001 Vuelta as shown in this list provided by Procycling Stats in their excellent livefeed of today’s stage.

As you’ll see from the list, stages ridden when EPO use was at its peak in the peloton dominate; there’s only one other stage from the past decade, from Andorra La Vella to Lleida in 2010, when there was a drop of 830 metres in altitude. Certainly, it’s well documented that the average speed of Grand Tours has dropped noticeably since the early 2000s.

A number of factors combined to make today’s stage so quick. As in that 2001 stage, there was a split in the peloton due to crosswinds and today that was followed by a tailwind.

With seven riders in the 45-strong front group, Deceuninck-Quick Step rode hard – and saw Philippe Gilbert take the win in Guadalajara and James Knox jump from 11th to 8th overall. Other teams in the front group had numbers too and an interest in distancing the other GC contenders – not least Movistar, whose quartet of riders included Nairo Quintana who leaps from sixth to second overall.

What we can say with certainty is that today’s stage was quicker than the fastest road stage ever at the Tour de France, which also came around the turn of the millennium, when Mario Cipollini won a 194.5km stage from Laval to Blois at an average speed of 50.4kph. 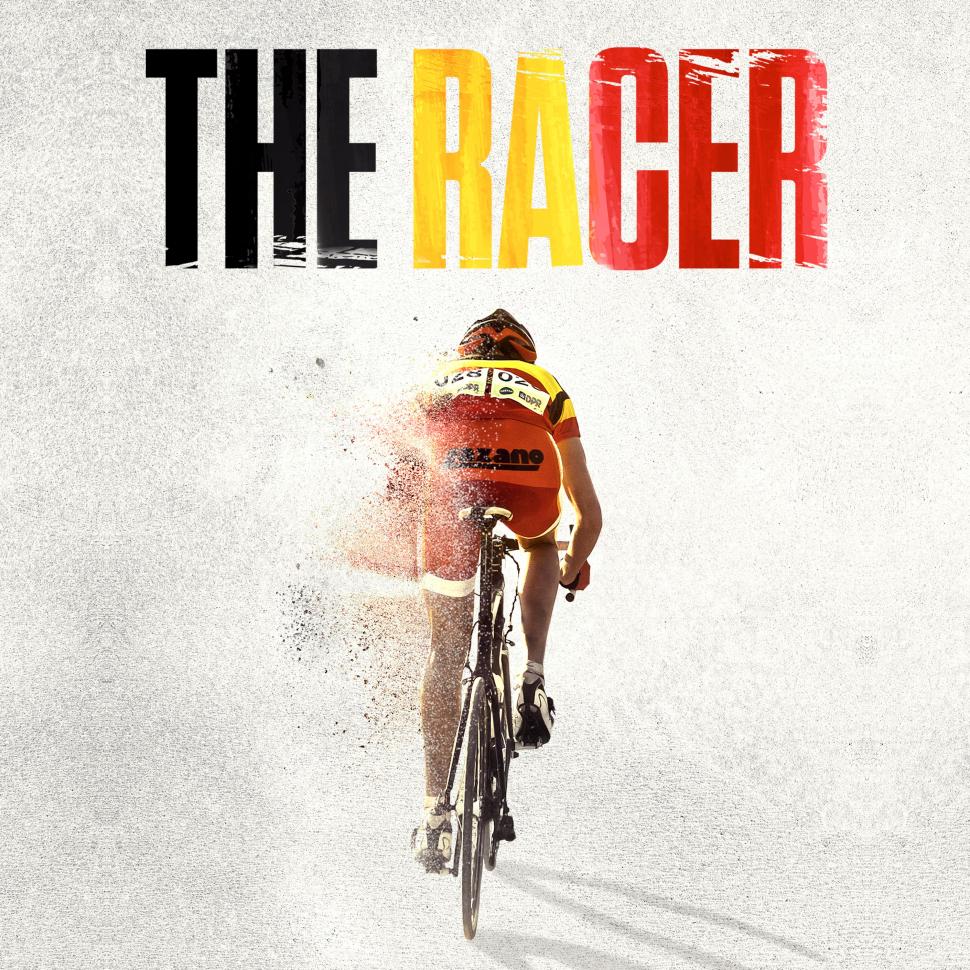 The Racer will be shown at the festival on Thursday 19th September, with director Kenneth Mercken in attendance for a Q+A. The semi-autobiographical film follows Felix, a pro cyclist, who dreams of becoming world champion; but it all goes pear-shaped when he joins an Italian team, headed by Bruno Leone, as Felix is dragged into a dark world of performance-enhancing drugs and corruption.

The venue is the Vue cinema in London's Piccadilly - tickets here if you're interested.

Jumbo Visma's Dylan Groenewegen made it three stage wins in five at Birkenhead Park in the Tour of Britain today - while ahead of tomorrow's individual time trial, Mitchelton-Scott's Matteo Trentin moves back into the race lead after finishing third to claim 4 bonus seconds, moving him 3 seconds ahead of Corenden Circus rider Mathieu van der Poel.

The longest stage of this year's Vuelta turned out to be a cracker with a huge break getting away, including seven riders from Deceuninck Quick Step who rode hard to build a big gap and got their reward as Philippe Gilbert won his second stage of this year's race and the young Briton James Knox jumping from 11th to 8th overall.

The big GC news though, following a stage raced at a frantic pace, was Nairo Quintana - in the front group with three team mates - taking more than 5 minutes on his rivals to jump from 6th to 2nd, knocking fellow Movistar rider Alejandro Valverde into 3rd overall.

Primoz Roglic of Jumbo-Visma retains the race lead by 2 minutes 24 seconds from Quintana ... but with 3 days' racing ahead of Sunday's finale in Madrid, could their yet be a twist in the tail?

11 September 2019, 14:20
Steve Cummings out of Tour of Britain after crashing on home stage

Dimension Data's Steve Cummings would have been looking forward to today's stage of the Tour of Britain - it's played out on his home roads on the Wirral. Unfortunately, his race is over after a crash - and he is being taken to hospital to be checked over.

Crash! Local lad @StevoCummings is down!

The race doctors are quickly in attendance; we'll see if he's able to continue his home stage pic.twitter.com/oeajhjAZSO

The break now has 5 minutes on the peloton, putting Nairo Quintana into the third podium place as things stand, and James Knox - who hpretty much his whole Deceuninck-Quick Step team with him - into the virtual top ten.

The livestats on Procycling Stats are a great way of making sense of what is going on.

When one of the @TourofBritain drivers offers our motorbikes a sweet, they take one. When they offer again... pic.twitter.com/9pxBoifvuL

11 September 2019, 11:19
Bath cycling studio naming dispute spins out of control as company is forced to change its name

In another case of an American fitness corporation claiming ownership of a generic cycling-related word (see Peloton for the other) this time it appears the corporation has won; as Somerset Live reports that Bath-based Spin Village are being forced to change their name, because California-based Mad Dogg Athletics own the trademark rights to the word ‘spinning.’

An intellectual property law firm ruled in favour of Mad Dogg Athletics, but Spin Village say they didn't believe they were in breach because they consider spin to be a generic term. Founder Charlie Bird, said: “This has been a tricky matter for us from day one.

"Whilst we recognise that Mad Dogg Athletics do own the trademark rights, we feel that it’s virtually impossible to enforce them.

“Pretty much all of our riders refer to our classes as ‘spin classes’ without even thinking; no-one ever says ‘indoor cycling classes.’

Fearing an expensive court case, Spin Village say they will now change their name, and have managed to somewhat spin it into a positive by asking customers to help them find a new name.

On their separate spinning.eu website, Madd Dogg Athletics describe themselves as "Home of the Spinning®, Peak Pilates®, CrossCore®, Ugi®, Resist-A-Ball® and Spin Fitness® brands", claiming to have trained over 200,000 instructors worldwide through 35,000 different fitness facilities. They were founded in 1994 by cyclists and entrepreneurs John Baudhuin and the elusively-named 'Johnny G', and they've owned the 'spinning' trademark for 20 years.

British Cycling has confirmed the riders who will represent the country in the team time trial mixed relay at the UCI Road Cycling World Championships in Yorkshire later this month.

The format, which made its debut at the European Championships last month with hosts the Netherlands emerging as winners, is contested by teams comprising three men and three women, with John Archibald, Dan Bigham and Harry Tanfield joined by Lauren Dolan, Anna Henderson and Joss Lowden in the Great Britain team announced today.

The three men will set off first for one lap of the 14km Harrogate Circuit, with the women starting when the second of their male team-mates crosses the finish line. The final team time will be taken when the second woman finishes, with the fastest team winning.

Great Britain Cycling Team Performance Director Stephen Park said: “The team time trial mixed relay is certainly going to be an exciting event, not least because it will be the first time it’s been held at a world championship level.

“I have a lot of admiration for John, Dan and Harry for the success they have achieved independently of British Cycling and the mark they have made on the cycling world.

“I believe those three riders will set us up for a strong first lap, before handing over to the women’s team to pick up the metaphorical baton. Lauren, Anna and Joss all possess strong climbing abilities which will be crucial on this course, and riding at this level will play a big part in their development, particularly in Lauren and Anna’s case as under-23 riders.”

He added: “With just under two weeks to go now until the road worlds, preparations are being finalised across the squads, and we are looking forward to announcing squads for the other races over the coming days.”

The whole Quick-Step team, Nairo Quintana plus 30-odd others decided to go for it about half an hour ago, which could make for a very interesting stage. Jumbo-Visma are also vying for control, as are Astana.

¡@JumboVismaRoad para a sus corredores en fuga para trabajar en su neutralización! / Jumbo-Visma wants to control the race, so their riders in the break are back to the bunch!

11 September 2019, 11:03
Deliveroo TV advert banned for being misleading as it turns out they can't deliver "where you want, when you want it" 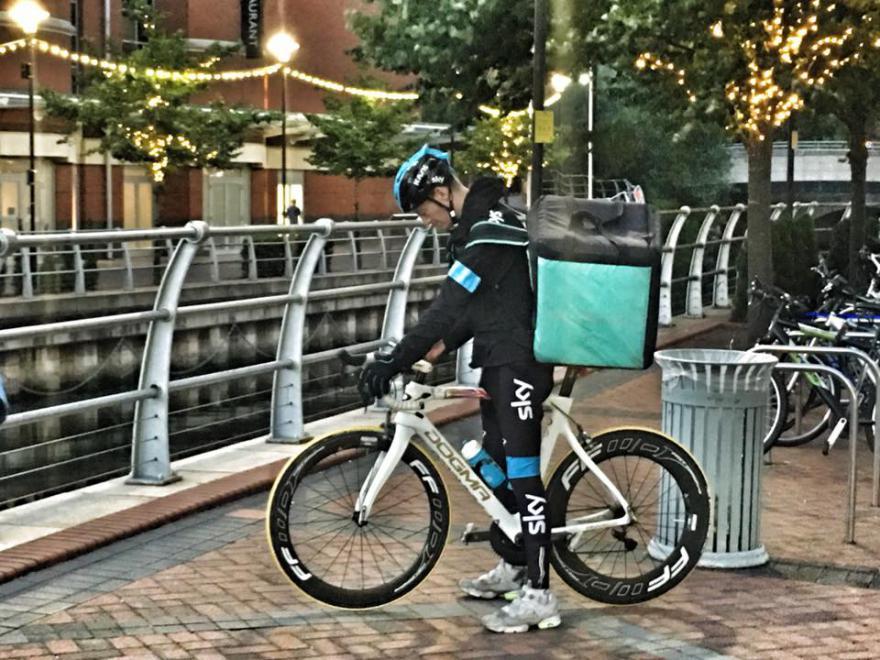 We can vouch for Deliveroo cycle couriers being able to get about... but it turns out they most definitely can't delivery anywhere in the UK, which The Advertising Standards Authority said the most recent Deliveroo TV advert implied. The ASA said the advert, that shows couriers delivering to astronauts on the moon and other unusual places, was "likely to mislead" because it wrongly implied delivery "was unrestricted throughout the UK".

A small piece of text at the bottom of the screen says "Some restrictions apply, obviously…" while a voice-over says "Order what you want; where you want; when you want it", but the ASA said this wasn't enough to make it clear. Deliveroo said the exaggerated scenes simply implied that it was possible to order in a wide range of everyday locations, and customers can quickly check the app to see if their location was covered.

Deliveroo's parent company Roofoods has been told the ad can't appear in its current form on TV again, and that similar claims don't appear in their other forms of marketing either.

Matt Stephens and Adam Blythe are in top form in this sideways look at cycling and life ...

@RealStephens is at his absolute best in this!

The Metropolitan Police announced that they arrested a 16-year-old boy on suspicion of attempted murder after a 17-year-old cyclist was left in a critical condition following a hit-and-run in Tower Hamlets - his injuries have been assessed as 'life-changing.'

Detectives say the teenager "appeared to be deliberately dragged under a car", and the driver of the maroon Ford Focus fled the scene. There is still an ongoing appeal for witnesses.

11 September 2019, 08:17
Chris Froome takes his battered body to San Fran to check out the latest gadgets

In sunny San Francisco for the @Apple #AppleEvent pic.twitter.com/tJy2irrLQd

With a crutch and now a bandage over his left thumb, Froome went to Apple's much-awaited unveiling of the iPhone 11, iPad and new Apple Watch yesterday. As someone pointed out in the comments, three Apple workers were reported to have hurt themselves walking into glass walls last year at Apple's HQ... so ya know, be careful Chris!

From a Canadian cycling magazine made for military personnel in 1914... that escalated quickly!

Video I came across of someone driving along Rembrandtplein in Amsterdam in the 1960s and me cycling along the same street this year. Which do you prefer? Radical change in cities is possible! pic.twitter.com/e07hxtzgQL

This video of a car-dominated Amsterdam street in the 60's vs now is a prime example of how things can change for the better in cities.