Ilnur Zakarin was Alpecin-Katusha’s hope for the Tour de France yellow jersey, but at the time of writing, he’s languishing 63rd and over 40 minutes behind the leader. If he had been in the hunt for the overall, he would be needing a strong ride in today’s time trial, so here’s a look at the Canyon Speedmax CF SLX with SRAM 1x he’ll race against the clock. 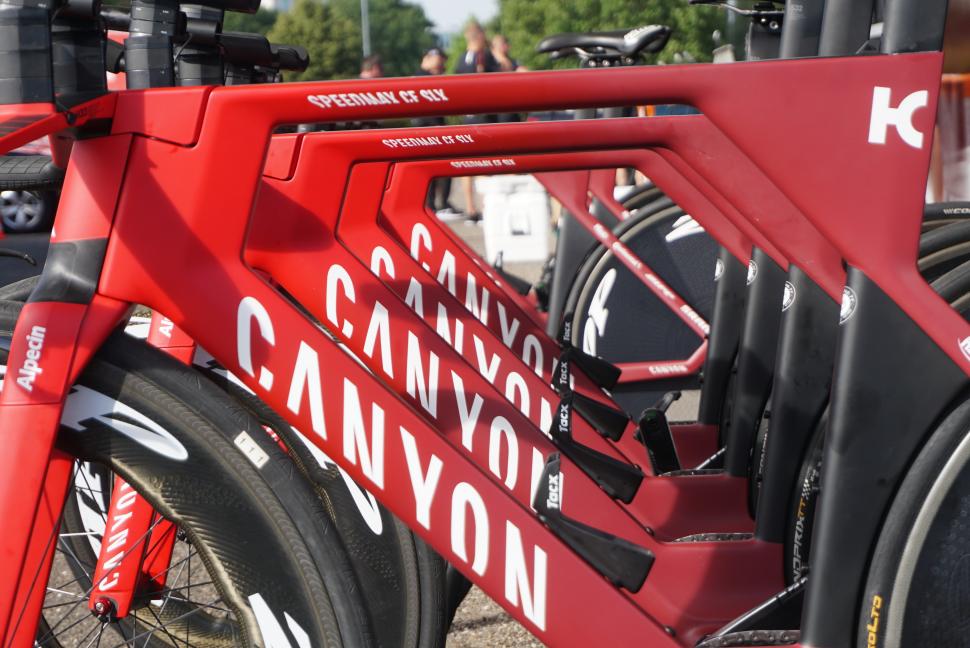 It’s the German company’s Speedmax CF SLX. The original model was launched in 2013 and updated in 2015, but the underlying aerodynamic design is fundamentally the same. 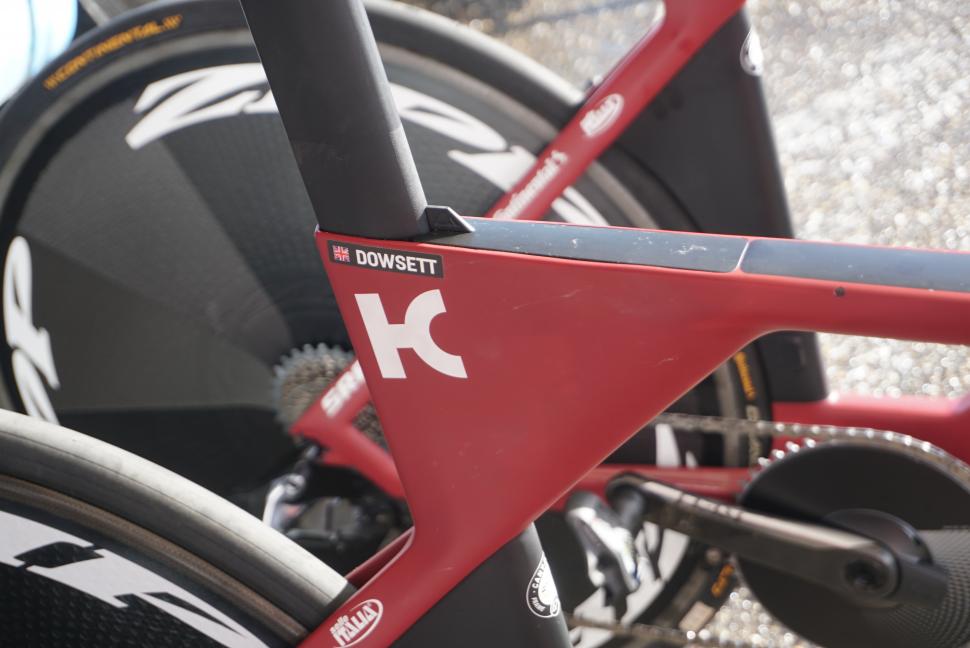 It’s also one of the few TT bikes only available with rim brakes, but we’re sure that’ll change soon. A key feature of the Speedmax is the integrated brake callipers. They’re made by TRP and positioned at the front of the fork, where a cover maintains aerodynamics and protects the brake, and behind the bottom bracket. 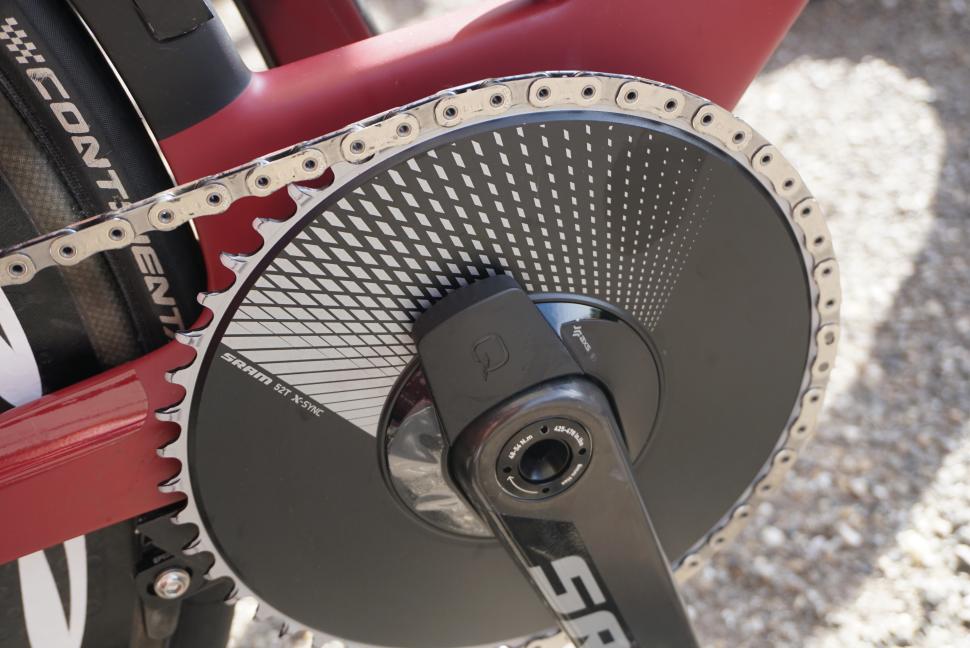 So while it's conventional rim brakes, the groupset is a much more modern affair. The team is sponsored by SRAM for groupsets and Zipp for wheels. As well as introducing a radical new approach to gearing, SRAM’s latest Red eTap AXS groupset also ushered in a brand new 1x option. And that is what Zakarin is choosing to ride. Off the shelf, this new grouspet offers 1x chainrings in 36 to 46t sizes, with bigger available for time trial bikes. Zakarin’s bike is equipped with a 52t chainring. All the power! The carbon fibre crank arms have an integrated Quarq power meter and narrow/wide teeth to ensure maximum chain retention. Let’s hope it works because there’s no chain catcher or guard to be seen on his frame. 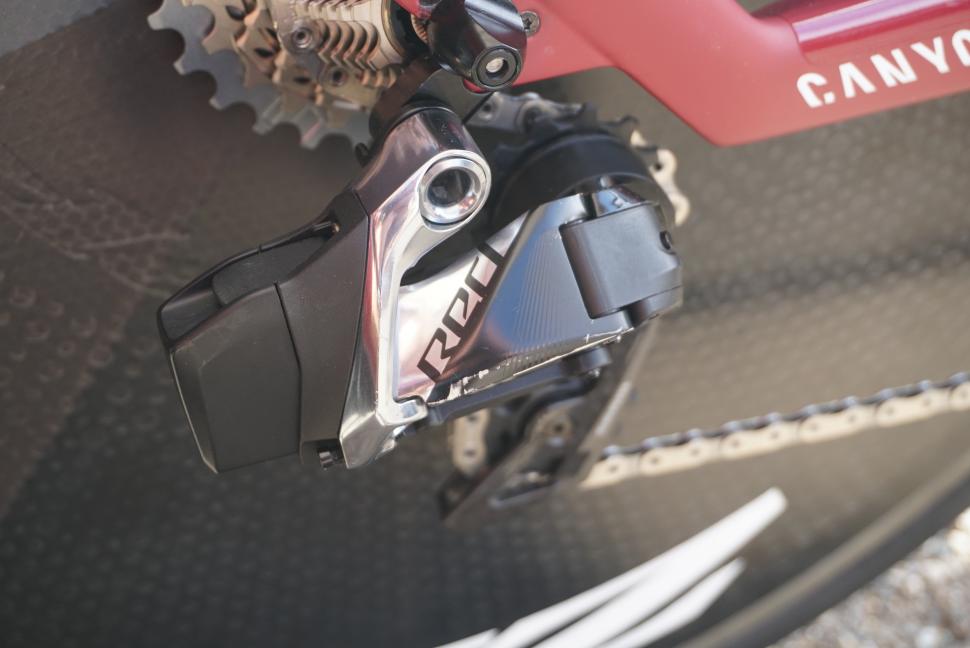 His cassette is an 11-28t and is used with SRAM’s new Flattop chain. The unusual look is due to SRAM adding more material to the top of the plate to beef up the strength that is minimised in the narrowing process. That rear mech has seen some fights. 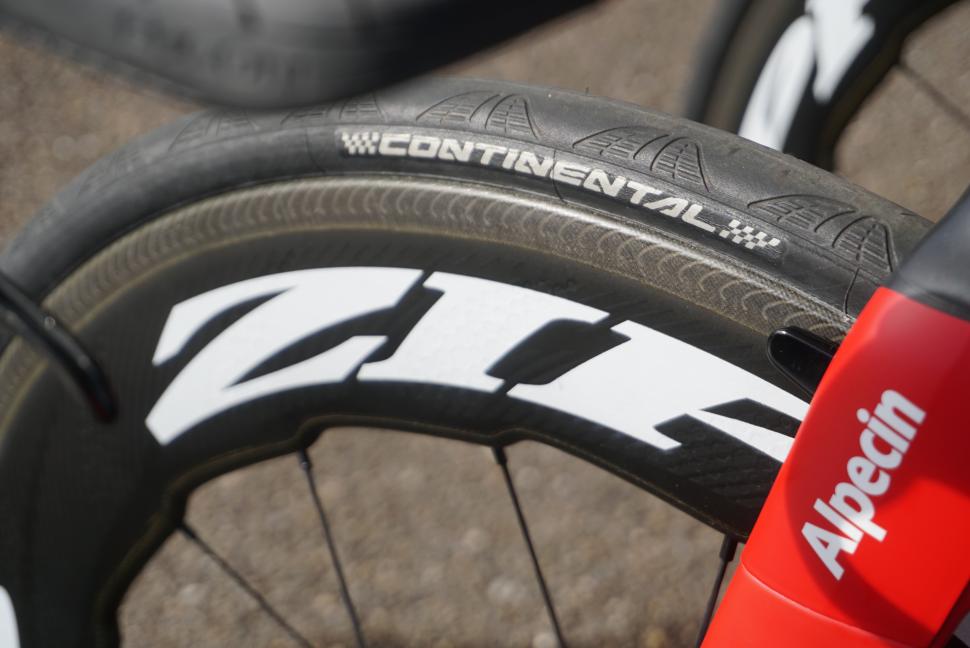 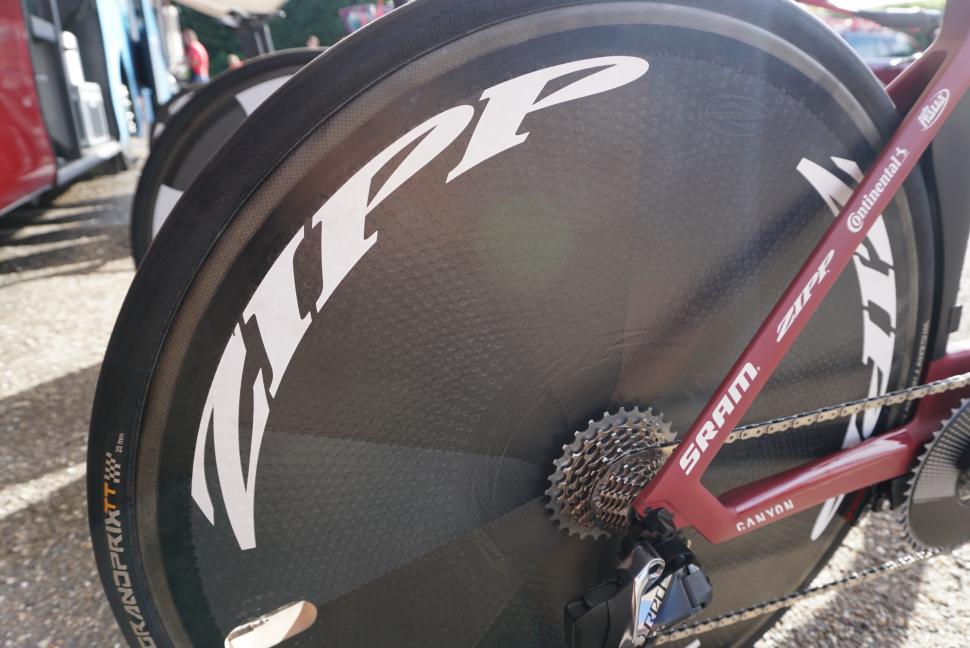 Zakarin combines a Zipp disc at the back with an 858 NSW at the front. The unique profile of the front wheel was inspired by humpback whales and provides alternating rim depths to ensure maximum stability in crosswinds. 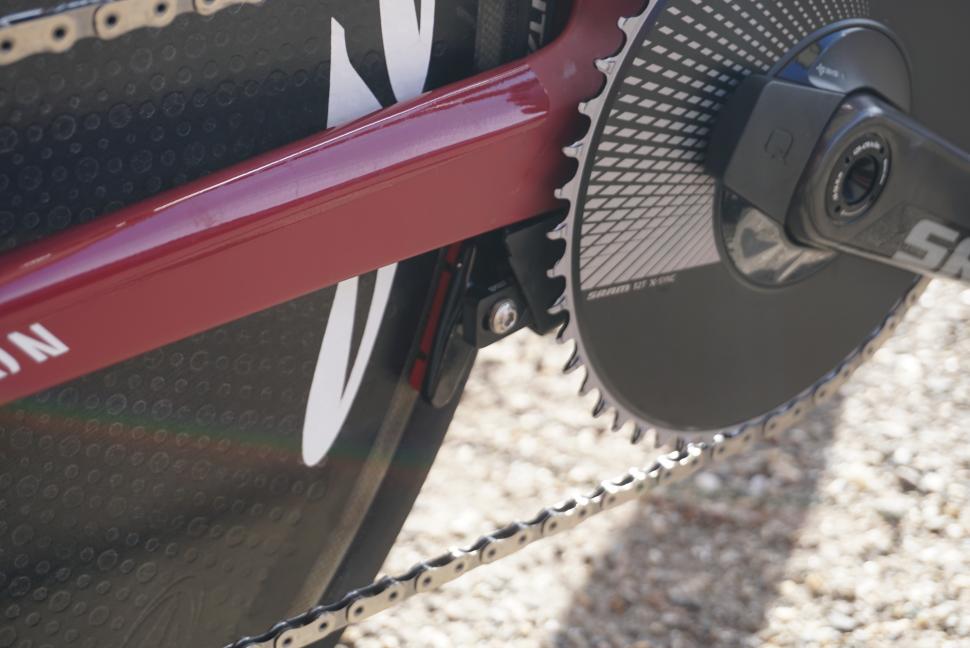 The Alpecin-Katusha team is wholly using disc brakes on the road stages, but for the time trials, it’s rim brakes. That’s simply because Canyon doesn’t yet provide a disc-equipped Speedmax. We’re sure there is one in the pipeline. That means rim brakes, and both are concealed from the wind, the rear behind the bottom bracket and the front integrated into the fork. 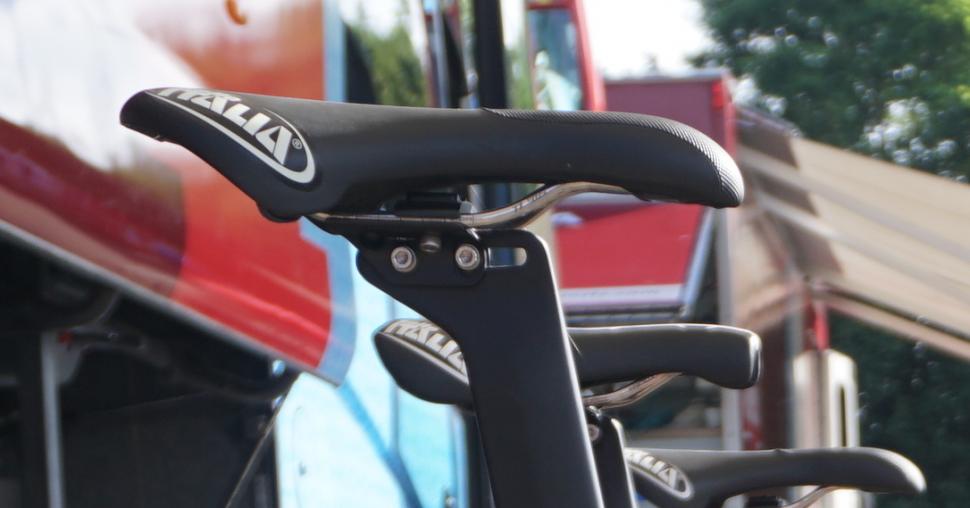 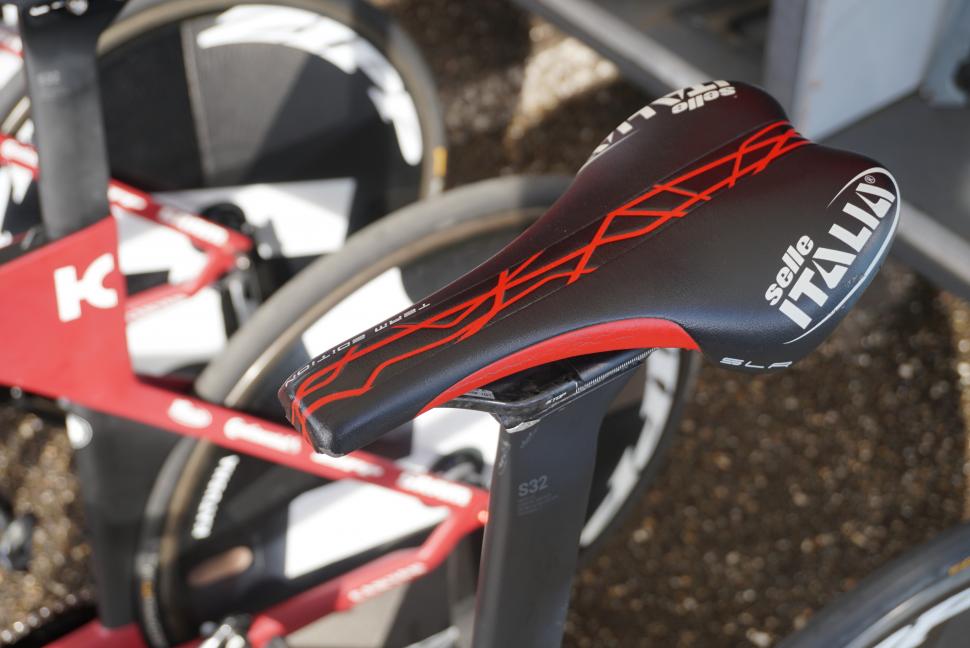 Stubby nosed saddles are common on time trial bikes. It’s because a rider will perch right on the nose to pivot their bodies as far forward over the handlebars as possible to try and achieve a very slippery aerodynamic position. Zakarin uses a Selle Italia Slr T1 Triathlon saddle. 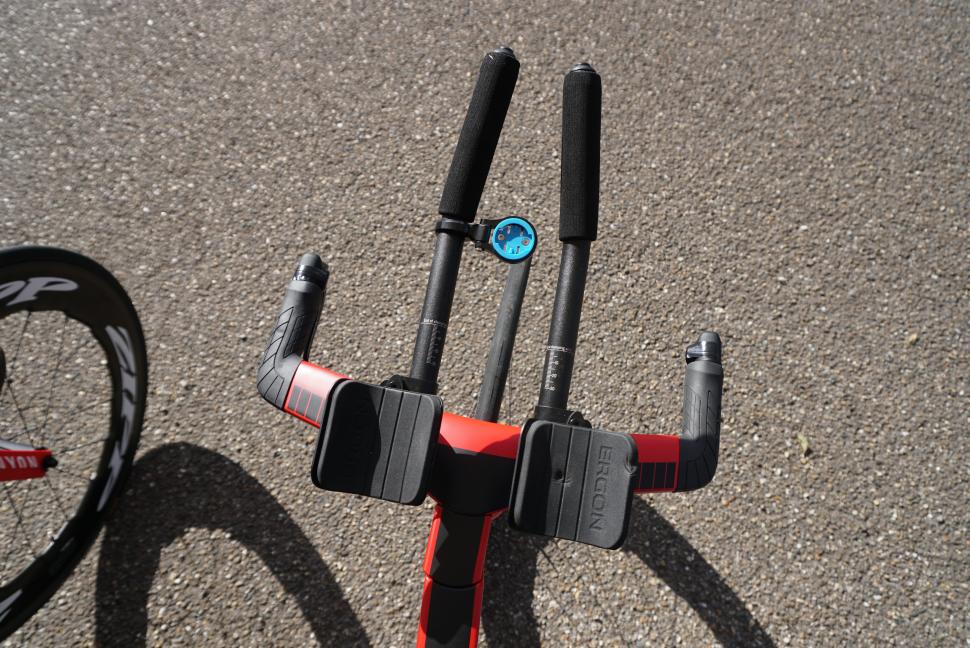 Handlebars are where we often see a lot of customisation on time trial bikes. The Speedmax handlebar has been developed with Ergon and the base bar seamlessly flows into the frame, and the extensions and arm pad rests are very adjustable.

There are different schools of thought when it comes to high versus low and narrows versus wide, and it comes down to finding the right setup for each rider. Zakarin has quite a narrow stance with a low height. 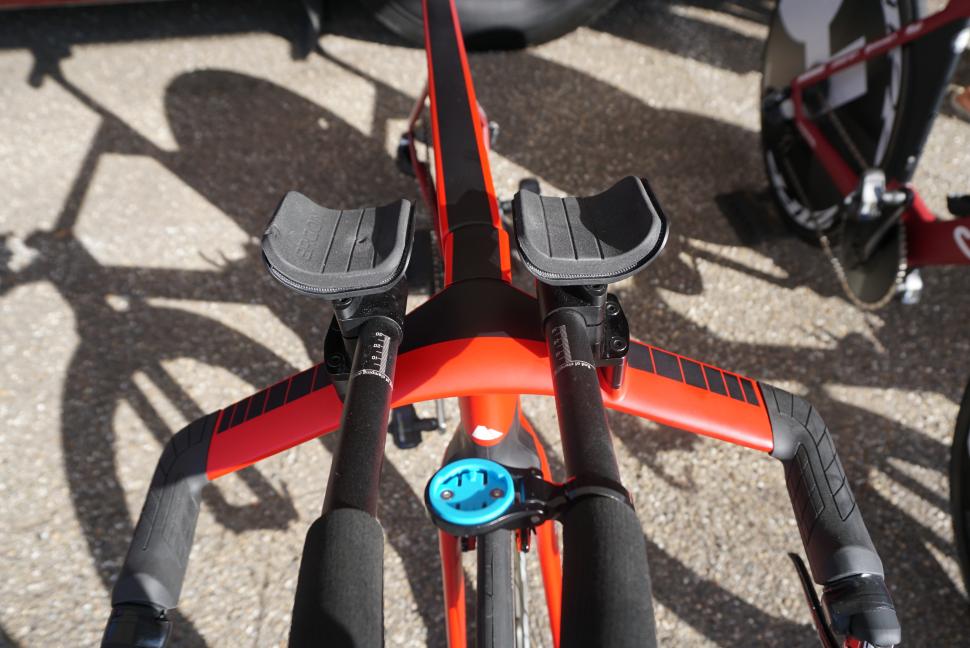 You often see little customisations on time trial bikes, especially around the handlebar area. Sometimes it’s very lo-fi! Here we can see electrical tape has been used attach one of the SRAM Blip wireless shifters to the brake lever. Crude, but it works in place of SRAM developing a brake lever with an integrated gear shifter. 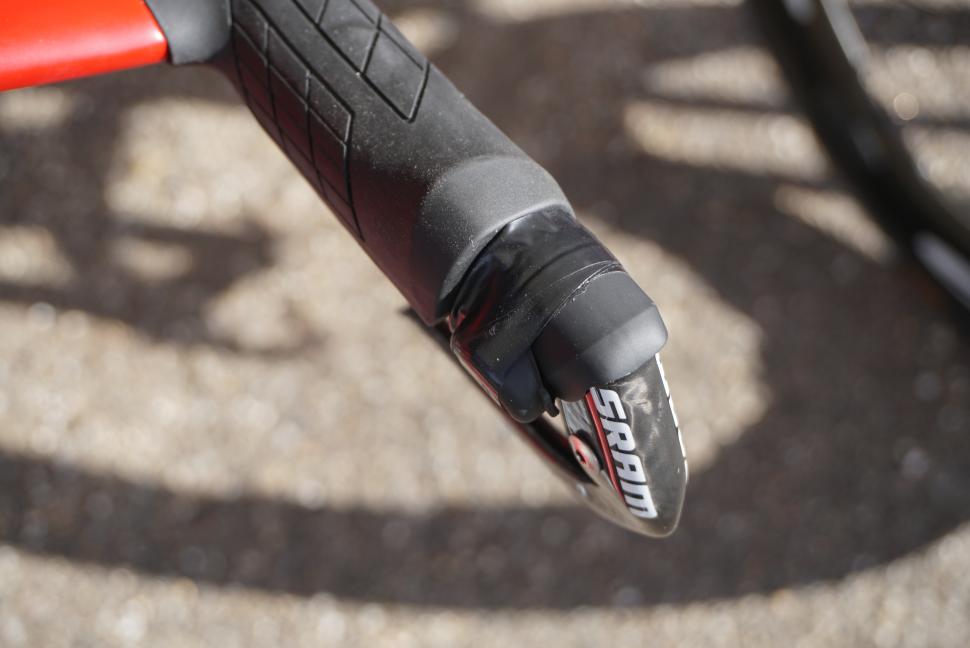 Electronic shifting and the addition of remote shift buttons has been a big asset to time trial bikes, making it easier to change gear when in the aero position and just providing more choice about where you want the gear shifter to be.

The extensions are wrapped in thick foam padding which looks suspiciously like mountain bike foam grips. A computer mount is attached just below the grips so Zakarin can easily view his vital stats when racing against the clock.

What do you think of Ilnur Zakarin's bike?