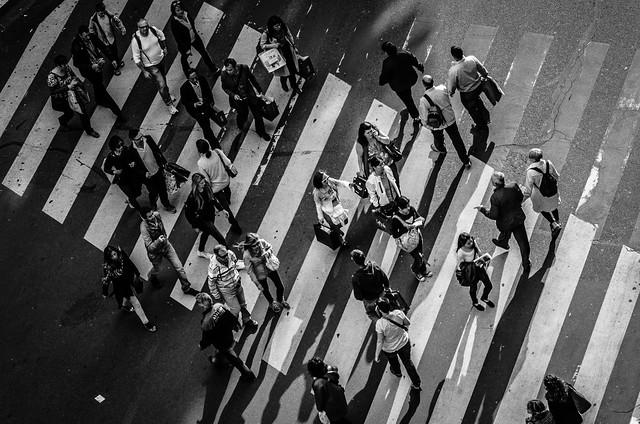 A plan by Greater Manchester cycling and walking commissioner Chris Boardman to add zebra crossings to 20,000 side streets across the city region has been scotched by the Department for Transport (DfT).

Boardman, who is developing Greater Manchester’s Bee Network to make streets safer for cyclists and pedestrians and persuade motorists to switch to active modes of travel, says the continental-style crossings – called ‘implied zebra crossings’ and also found here at locations on private land such as at retail parks – would cost £300 each.

But the DfT reportedly insists that they are not permitted under UK law, where zebra crossings are required to include Belisha beacons and zig-zag markings, increasing the cost a hundredfold to £30,000 for each location, reports The Guardian.

Boardman said the implied zebra crossings were a way of reminding motorists that people on foot have right of way when they start crossing a side street.

“These crossings enforce a right that everybody has forgotten about,” he explained. “The law is this: that when you put a foot on the carriageway, you have the right of way.

“But people don’t do it, because there is no point being in the right, while at the same time being in hospital after getting run over. I would like to see thousands of zebra crossings in Manchester.”

He said a trial being conducted by the Transport Research Laboratory by Transport for Greater Manchester (TfGM) suggested that the crossings did reduce the risk to pedestrians and as a result were “legally robust and responsible.”

The Greater Manchester Combined Authority (GMCA) has urged the DfT to update regulations to allow the crossings, but the government department last year ordered that a trial implied zebra crossing in Salford be removed.

A DfT spokesman for the DfT said: “Zebra crossings are designed to ensure the safety of all road users – beacons are necessary for visibility, while zigzag markings prevent parked cars blocking the view of pedestrians and cyclists.

“We will always put safety first and any potential regulation change would need to be based on robust research and supported by off-road trials.”

News of the disagreement comes as TfGM announces a further £134 million in funding for the Bee Network which will extend it to 1.800 miles in total with 15 new schemes – including 20 miles of protected cycle lanes – in areas including Tameside, Wigan, Trafford and Stockport schemes.

The plans, subject to agreement by GMCA later this week, also provide for the launch of a cycle hire scheme across the city region next week.

Mayor of Greater Manchester, Andy Burnham, said: “A Greater Manchester-wide bike hire scheme will be an integral part of our transport network. If we can get tens of thousands of people doing their first and last mile on a bike or on foot, we’ll be well on our way to creating a more integrated, sustainable and varied transport offer.

“The 15 schemes being proposed today are an exciting next step towards building the Bee Network. When complete it will be the largest joined-up walking and cycling network in the country.

Boardman, said: “I couldn’t have imagined when I took up this role two years ago that we’d get to a point where we’re already oversubscribed funding-wise because we have so many high quality schemes being proposed. What a fantastic problem to have.

“We can crack on with the development and build of a lot of these schemes - and in the meantime we’re going to scale up our campaign to secure further funding and will shortly publish a delivery plan.

“A true alternative to the car is something that Greater Manchester residents clearly want – that’s why I’m so pleased to announce that our planned network is now longer and more comprehensive than before,” he added.