A couple who got married on the start line of the Etape Caledonia eight years ago celebrated their wedding anniversary by riding the Scottish closed road sportive again today – and appropriately, among the 5,500 fellow cyclists taking part was Four Weddings and a Funeral star, John Hannah.

Back in 2011, ex-world champion and Hour record holder Graeme Obree and former SNP leader and now Deputy First Minister of Scotland John Swinney were among those who watched on as Jo and Rick Millin tied the knot before the event got under way in Pitlochry.

Today, appropriately, the couple were joined at the start of the 85-mile sportive in Highland Perthshire by keen cyclist John Hannah (in yellow below), one of the stars of the Richard Curtis rom-com Four Weddings and a Funeral, which marked the 25th anniversary of its release this week. 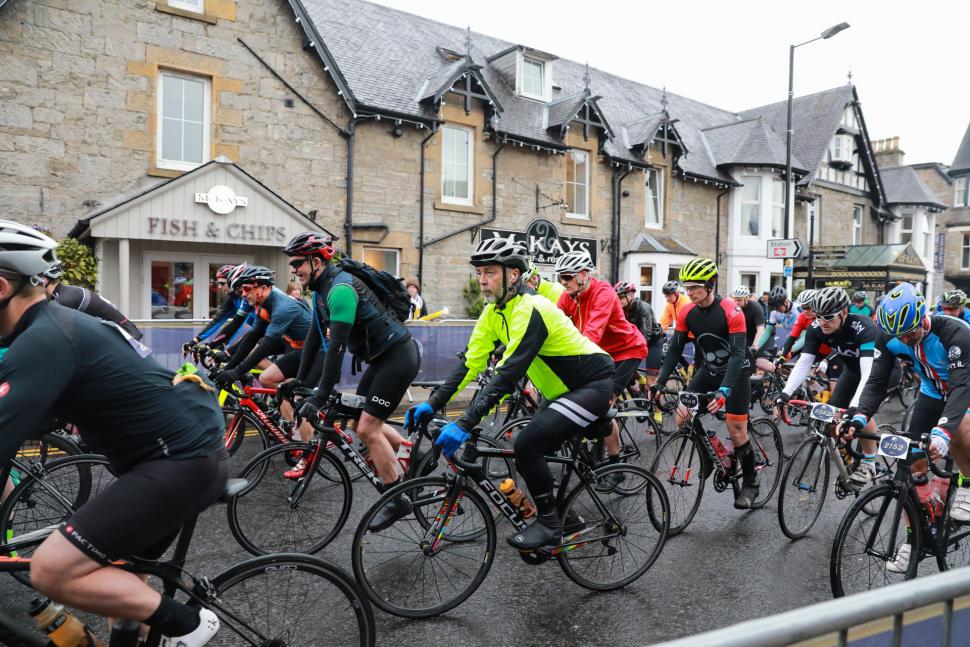 Before setting off this morning, Hannah, who lives in London’s Richmond – which is handy for doing training laps of its park – told organisers that it was his "first time in Pitlochry, it's beautiful."

It seems that the 57-year-old Scottish actor, whose screen credits include starring opposite Gwyneth Paltrow in Sliding Doors, and playing Jonathan Carnahan in The Mummy trilogy, enjoyed himself.

So my pessimistic forecast from yesterday totally off. A great day- no rain - and big thanks to all the volunteers, staff, the cheering millions and the riders, of course. Man the last 5 was a doozie. Special thanks for the massage at the end! I needed that. See you next year!!

“We hope all of the participants today had a great experience being part of this challenging and exciting sportive.

“It's been fantastic to be able to bring Etape Caledonia to Highland Perthshire once again,” he continued.

“After 13 years the event is still hugely popular with cyclists of all levels of ability and from all around the UK and we were delighted to see John Hannah amongst the riders.

“We also wish Jo and Rick a happy anniversary, what an amazing way to celebrate!"

Anyone wishing to take part in next year’s event can sign up from tomorrow morning at www.etapecaledonia.co.uk .