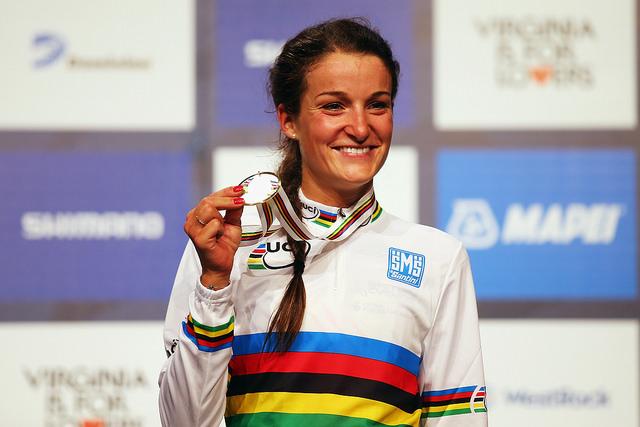 Yorkshire rider back on home roads as part of prep for September's World Championships...
by Simon_MacMichael

Lizzie Deignan will feature in the Asda Tour de Yorkshire Women’s Race next month, as she returns to racing in a year in which her big goal is reclaiming the rainbow jersey when the UCI World Road Cycling Championships take place in her home region in September.

The 30-year-old’s last race was at the World Championships in Bergen, Norway in September 2017, after which she took a break from the sport ahead of giving birth to her and husband Philip’s first child 12 months later.

Since then, the 2015 road world champion has been working on getting back to fitness, and she will compete on the continent later this month before taking part in the Yorkshire race on 3 and 4 May.

She announced her participation during a visit today to the Yorkshire Bank Bike Library at Leeds Urban Bike Park in Middleton – one of 61 Bike Libraries in the region that enable children to access bicycles, free of charge.

“I’m so excited to ride this year’s Tour de Yorkshire,” said Deignan, who now rides for the Trek-Segafredo team.

“To be able to race on some of the World Championships course is an opportunity not to be missed and I can’t wait to be back on home roads and racing in front of home crowds again.

“Today I’ve been at the Leeds Yorkshire Bank Bike Library helping to inspire the next generation of young cyclists,” she continued.

“It’s amazing that initiatives like this can open up the sport and create opportunities for young children – I wish there had been something like this when I was a kid and I might have got in to cycling sooner!”

Peter Dodd, commercial director at Welcome To Yorkshire, which organises the race in partnership with Tour de France owners ASO and British Cycling, said: “We’re so pleased Lizzie will be competing at the Asda Tour de Yorkshire Women’s Race and she’s guaranteed to receive a hero’s welcome.

“The opening stage of this year’s route goes within a few kilometres of Otley, where she was born, and right through the centre of Harrogate, which she now calls home. Her race win in 2017 has gone down in history and we’re really looking forward to seeing her back in Yorkshire as part of a truly world-class peloton.”