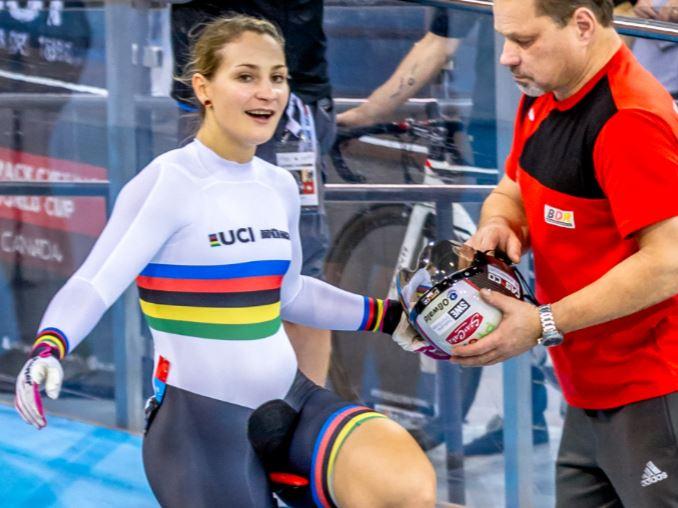 Olympic champion track cyclist Kristina Vogel, who was left paralysed from the chest down after a training crash last June, has been honoured with a Barbie doll in her likeness for International Women’s Day.

Vogel, who won team sprint gold at the London Olympics and the individual sprint title in Rio, was training for the German Sprint Grand Prix at the velodrome in Cottbus when she was involved in a collision with another rider.

She was placed in an induced coma and underwent spinal surgery, but will never walk again.

Earlier this week, she spoke to Chris Hoy about dealing with her paralysis. Echoing the thoughts of many who have heard her speak since the accident, Hoy called her “an incredible human being.”

Vogel is one of 20 women who have had dolls made in their image as part of Barbie’s ongoing “Role Models” campaign.

“Kristina continues to persevere and share her story with the public,” said manufacturer Mattel in its announcement. “With her infectious vitality, she is a model for believing in yourself.”

It’s me, @Barbie
I got my “One of a Kind Barbie”
I’m can’t describe my feelings in words... i’m just so proud!
To inspire young girls to dream big
————————————————#staystrongkristina #queenbee #morerolemodels #YouCanBeAnything #CloseTheDreamGap |Werbung |Ad pic.twitter.com/BeFwvR6HT3

The Vogel Barbie doll is not the first in a wheelchair. Last month Mattel announced a new line of Fashionista Barbies, which will include different body sizes and two with disabilities – one in a wheelchair and one with a removable prosthetic leg.

The Mighty reports that the firm introduced its first wheelchair-using doll, Share-a-Smile Becky, in 1997. (Although the website notes that the Barbie world was not wheelchair accessible and Becky couldn’t actually get through the door of Barbie’s house.)

1
“Absolutely vile” – Cyclist slams Staffordshire Police after it tells him no prosecution of drivers based on video footage if no injury or damage involved
2
Canyon appears to have fixed the 2021 Aeroad just in time for the Tour de France
3
Pinarello launches Dogma F in time for Tour de France
4
Number of cyclists killed on British roads up 40% in 2020
5
Elaine Paige blames empty cycle lane for traffic jam woes and accuses Sadiq Khan of 'killing' London
6
Van Rysel releases Flanders lifestyle range with donations going towards cobble renovations
7
£1000 worth of NamedSport prizes up for grabs with 11 chances to win!
8
Mark Cavendish returns to Tour de France after two-year absence