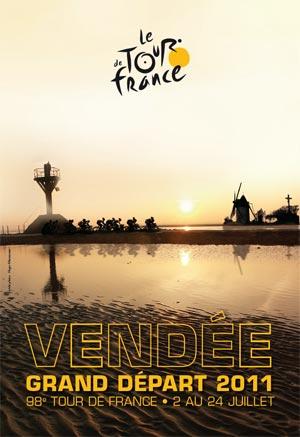 Two routes, one in Alps, the other in the Auvergne, on offer for 2011 Etape du Tour?

Speculation mounts ahead of next week's official presentation of 2011 Tour de France route...
by Simon_MacMichael

There’s a week to go until the route of the 2011 Tour de France is officially unveiled in Paris, but the internet is already buzzing with rumours about the potential itinerary, and one intriguing possibility being tossed about that we know will be of interest to many road.cc users is that next year, there will be not one, but two Etapes du Tour.

That’s the theory being put forward by France-based Thomas Vergouwen, who by day works for mobile phone giant Orange, but in his spare time puts together a comprehensive blog that focuses on pro cycling, including trying to second-guess the route of the following year’s Grande Boucle.

While Orange is of course one of the official partners of the race – in 2007 and 2008 Vergouwen set up and ran the company’s Tour de France blog – he isn’t breaking any embargoes in coming up with his predicted route.

Instead, he scours French regional newspapers – with towns hosting stage starts and finishes required to stump up significant amounts of cash, the potential arrival of the Tour is difficult to keep under wraps – and quizzes contacts in areas such as the hospitality industry for news of hotel block bookings in July. That, coupled with his knowledge of the race and what organisers ASO have done in the past, helps him arrive at a pretty educated guess.

As to how educated that guess is, well, Vergouwen isn’t making any promises, but he does point out that last year the route he had arrived at the day before the official announcement was 100% accurate.

What we do know for sure about next year’s race is that it will start in the Vendée before heading up into Brittany. Everything else, officially, is for now a blank, but Vergouwen’s blog helps fill those in. At the same time, it provides fascinating snippets of the local politics and logistical and geographical issues that lie behind the decisions of individual town councils in whether or not to seek to host a stage, and if so, whether they succeed.

After Brittany, he predicts, the race detours briefly into Normandy, with a stage finish in Lisieux, before heading south through the centre of the country via the Massif Central towards the Pyrenees. In this year’s edition of the race, the latter range figured prominently, of course, due to it being the centenary of the Tour’s first ever mountain stages there in 1910.

This year, however, it’s the Alps that get star billing, and again there’s an 100th anniversary to mark, with the Col du Galibier first being negotiated in 1911. Like the Tourmalet in this year’s race, the 98th edition is expected to see the Galibier climbed twice, with a summit finish on the final Thursday of the race following a stage that’s expected to start in Italy in either Turin or nearby Pinerolo. The following day, the Galibier is thought to figure en route to a potentially race-deciding finish on the Alpe d’Huez.

So, onto the Etape. Vergouwen cites an article that appeared a fortnight ago in the Dauphiné Libéré newspaper which claims that the Tour will be visiting the Hautes-Alpes département for four days, and which puts forward two potential stages that might be mirrored by the Etape, which it says will take place on Saturday 16 or Sunday 17 July. The candidate stages for the Etape, it suggests, are the ones from Pinerolo to the Galibier and from Modane to Alpe d'Huez.

Vergouwen, however, isn’t so sure that starting the Etape in Italy is a viable proposition, however, pointing out the logistical difficulties of setting up the event village outside France, and says that the Modane to Alpe d’Huez stage is therefore the more likely route with the event being held on Sunday 17 July.

However, he does raise the possibility, according to what he describes as a reliable source, that the Etape may run on the same date between Issoire and Saint-Flour in the Puy-de-Dôme département, the expected route of Stage 9 of the race.

That would presumably include climbs within the Massif Central which would certainly be less heralded – and perhaps less taxing – than their more famous counterparts in the Alps, and according to Vergouwen, gives rise to the prospect of two Etapes being held on the same day.

It won’t be until a week today until we know whether or not that hypothesis is correct, but there’s little doubt that the Etape has gone from strength to strength in recent years, with demand for places the cyclosportive equivalent of Glastonbury tickets going on sale.

Holding two events on the same day might not only help organisers meet demand, but may also enable them to split the field by ability – reports from last year’s edition in the Pyrenees suggest that the broom wagon is as merciless as ever.

Enabling the more expert riders to tackle the Alpe d’Huez and others a separate, less demanding itinerary in the Auvergne could be one solution to that, particularly if those completing the latter within a set time could then be offered the chance to graduate to the main event the following year.

Of course, all of this is speculation right now, but rest assured that we’ll be in Paris next Tuesday – French railway strikes permitting – to cover the presentation of the route of both the Tour and the Etape.

We’re even planning to arrive at the Palais des Congres in suitable style, taking a Vélib' along the Rue de Rivoli, across Place de la Concorde and onto the Champs-Elysées, perhaps with a slightly self-conscious victory salute to celebrate having survived the Parisian traffic as we cross the line. Unless it’s raining.

And naturally, we’ll be bringing you all the official news and reaction on the route as well as the Etape – or Etapes – as soon as it happens, so make sure you check back here on the day.