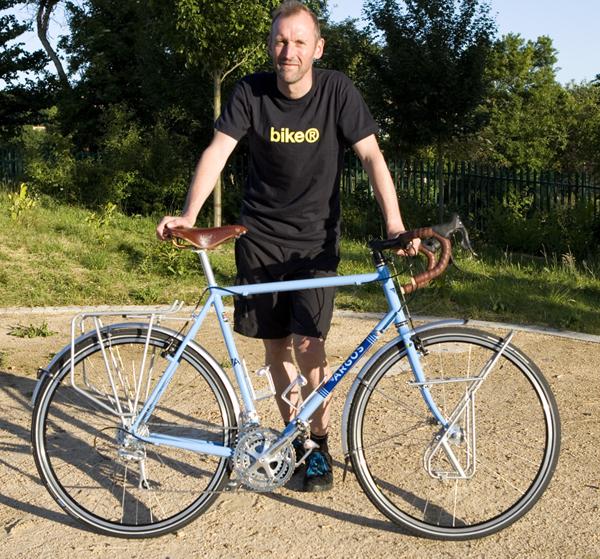 Bristol cyclist returns from 1,783-mile ride around the coast of Ireland
by Martin Thomas

Nick, a freelance graphic designer, took 36 days to cover the 1,783 miles. But speed and distance are far less important to him than the people he meets on his travels. And on this trip he recorded a canoe builder, a weaver, a flute carver and a traditional story-teller among many others. He overlays the recorded interviews with photographs to create what he calls soundslides – you’ll find them all on Nick’s website.

Nick told the Bristol Evening Post, "It's a lovely place to ride around. I can't think of a better way of seeing a country than riding. And the artisans are definitely what make it. They are quite inspiring people.

"I call them artisans as they are people who do something out of a passion rather than financial reasons. It is fascinating meeting them, especially in their homes and their workshops and that is what becomes visually interesting and which I try to capture in the soundslides."

Nick also met a couple of stars on his travels – he made a soundslide on singer songwriter Billy Bragg who he stumbled upon in Bridport, and he also met Graham Norton in a pub.

Nick is using the ride to raise money for the Parkinson’s Disease Society – his older brother Bob was diagnosed with the condition a few years ago and Nick has set himself the target of raising £10,000 to help the search for a cure.

Graham Norton added a four-figure sum to Nick’s Justgiving page a few days after they met and he is now just a few hundred pounds short of his goal.

Nick was reunited with his partner and three children last week and says he has no more cycling plans for the time being, although he accepts that things can always change.

He told the Evening Post, "Last year I had no intention of riding around Ireland. But then this year the idea came about.”

Then – ominously for his partner, perhaps – he added, “I recently read Laurie Lee's book, As I Walked Out One Midsummer Morning, about his journey around Spain. Now I'm quite interested in recreating that journey.”

1
Hell of the Ashdown sportive cancelled – but no refunds for those who entered
2
Met Police denies operation issuing hi-vis to cyclists was ‘victim-blaming’
3
Prime Minister’s confusion over cycling funding reflects Downing Street “chaos” says MP
4
Family of driver who fatally injured cyclist conspired to cover up crime
5
Bontrager unveils Elite road pedals
6
"Ditch the saddlebag": Dib Sports launch 2-in-1 hydration and storage bottle
7
Hit and run driver who killed cyclist “did not look properly or at all”
8
Edinburgh cyclist aiming to become the fastest woman to ride around the world