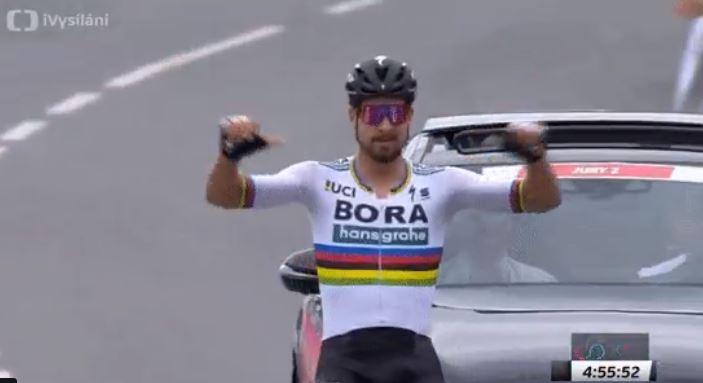 Peter Sagan: Cycling is "a boring sport" to watch on TV

Road world champion Peter Sagan, whom many view as one of the most exciting riders in the peloton, believes bike races on television are boring and can’t understand why people would sit through them for hours at a time.

The Bora-Hansgrohe rider, who finished second to Elia Viviani of Quick Step Floors on Sunday’s final stage of the Vuelta, made his comments in an interview with the Spanish newspaper El Pais.

Asked whether he believed riders in the peloton needed more freedom, the Slovakian went off at a tangent and questioned why anyone would want to watch the sport in the first place.

“I don’t know how to explain it,” he said. “Taking an example, if I’m watching a 200-kilometre bike race on TV, if I switch the TV on with 100 kilometres to go they [the riders] are still the same, and 20 kilometres from the line, they’re the same.

“However, in going from 100 to 20 kilometres, two hours have passed, you’re in front of the TV with nothing happening.

“But if you only look at the last 10 kilometres – or five kilometres or one kilometre – everything changes at high speed, even in the sprint stages.

“If though you turn on with 100 kilometres to go, you feel asleep, right? Then you wake up 10 kilometres from the end and you’re curious to see how it finishes.

“Do we think people like to watch this? I don’t understand it. For me, it’s a boring sport, and when I’m watching it I only watch the last five kilometres.”

Had Sagan been watching last year’s world championship road race on TV – rather than riding it and claiming the rainbow jersey for the third year in a row – he wouldn’t even have been able to do that.

The television relay failed with 4 kilometres to go, leaving viewers and commentators in the dark over what was happening, with only the finish line camera working.

At the time the signal disappeared,  it was touch and go whether a late attack by France’s Julian Alaphilippe and Italy’s Gianni Moscon would stick, or whether the pair would be caught – which is what happened as Sagan sprinted to victory for a third year in a row.

Some wags on social media said that the absence of TV pictures, other than the fixed finish line camera, was just like being at the race itself, and to be fair they had a point.

Sagan’s comments – unlikely to go down well with race organisers or the sponsors of the team that pays his hefty wages, return on investment calculated in large part on TV exposure of the brands whose names are on this jersey – seem aimed more at the three week Grand Tours rather than races such as the Tour of Flanders or Paris-Roubaix, where the key Arenberg cobbles come almost 100 kilometres from the finish.

While research from France Televisions shows that each year, as many people tune in to the Tour de France for the scenery as do for the racing itself, Team Sky’s continuing domination of the race is causing viewers to switch off, both in its home country and elsewhere.

At the same time, race radios, power meters and well organised teams have increasingly led to a more formulaic style of racing – hence the moves by race organisers to try and inject some excitement by introducing short, tough mountain stages, for example.

Nevertheless, there are a handful riders who do have the ability to single-handedly light up a bike race, and whose presence on the start line alone will guarantee people settling down on the sofa to watch the race unfold and wait for them to make their move.

Unfortunately for Peter Sagan, one of those riders happens to be Peter Sagan, so he would only be able to watch a recording … by which time, of course, he would know the result.