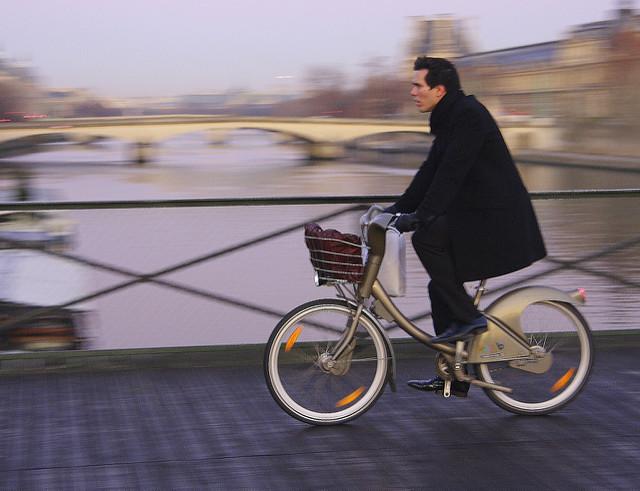 Cyclist in Paris crossing the Pont des Arts on a Velib (CC BY SA 2.0 on Flickr by Jean-Francois Gornet)

"France is a great cycling nation," says Edouard Philippe. "But in France, cycling is still a sport"...
by Simon_MacMichael

Edouard Philippe, prime minister of France, has unveiled a programme designed to treble the number of people in the country using bicycles for everyday journeys by the time Paris hosts the Olympic Games in 2024.

“France is a great cycling nation,” he said, unveiling the government’s Plan Vélo [Bike Plan] . “I saw this again first-hand this summer by visiting a stage of the Tour de France.

“However,” he continued, “in France, cycling is still a sport. A popular sport, and one that is very widespread,

“But it’s a sport and too seldom a means of transport for doing the shopping or going to work, as happens in northern European countries which are less passionate about cycling than us.”

Currently, 3 per cent of daily trips in France are made by bicycle, a figure which the government wants to increase to 9 per cent in the coming years.

In a speech delivered in the city of Angers in the Loire Valley on Saturday, the Republicans politician pledged that the government would spend €350 million on cycling infrastructure over the next seven years.

The money will be used principally to connect local networks, which are the responsibility of regional and departmental authorities.

Philippe said that missing links in cycling infrastructure between local authorities “discourage cyclists, because [those routes] are the most dangerous.”

Invitations to tender will be issued next year, with local authorities encouraged to bid for their share of the cash, which marks the first time central government in France has funded cycling projects.

Other measures being introduced to get more people cycling within France include tax breaks for employers and workers and free cycling lessons in all secondary schools by 2022.

All new bikes sold in France will also be security marked in an attempt to combat theft , with 300,000 bicycles reported stolen last year alone.

The prime minister promised to overhaul the country’s Code de la Route [Highway Code] which he acknowledged was, “from the outset, designed primarily around the car.”

Philippe said: “The thinking now is to adapt it to other means of getting around, especially cycling, so that cyclists are safer.”

He concluded his speech by quoting Jean Bobet, the younger brother of three-time Tour de France winner Louison Bobet and who was himself a successful rider, winning Paris-Nice in 1955 and later becoming a noted journalist and author on cycling, on how riding a bike gave one pleasure despite the effort.

“The effort nowadays is global warming,” Philippe said. “The concentration of CO2 in the atmosphere. Air quality in cities. Stress.

“The Plan Vélo is one way amongst others of adapting to it, which at the same time does not prevent getting real pleasure, real wellbeing in our cities and countryside,” he added.

“After all, in a society which is a bit addicted to speed, it’s sometimes good to know how to live by ‘freewheeling’.”