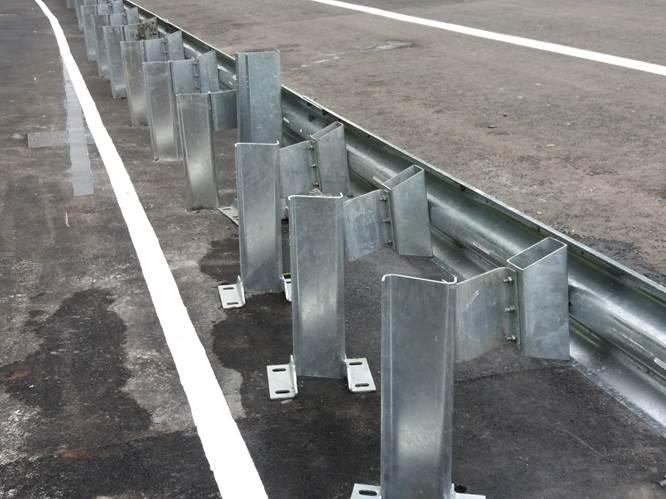 Safety fears raised over cycle path on viaduct in Bristol

South Gloucestershire Council has sought to reassure cyclists after safety concerns were raised in connection with a cycle path on the Bromley Heath Viaduct, which forms part of the A4174 Avon Ring Road in Bristol.

In an exchange of emails seen by road.cc, a number of cyclists contacted the local authority to express their concern about sharp edges on the supports on a barrier separating the cycle path from the main carriageway, as well as the presence of a bollard in the middle of the path.

The email trail highlighted previous examples of cycling infrastructure giving rise to safety concerns that we have covered on road.cc include the Twin Sails bridge in Poole, Dorset, where cyclists sued the council after sustaining injuries on its “razor sharp” barriers, and the so-called ‘Cheesegrater’ bridge in Bristol, which was resurfaced in response to a petition.

In an email sent to South Gloucestershire Council, Alan Williams wrote: “It’s great to see that the viaduct is now fully open. The cycle-path is a vast improvement.

“Am I being too picky though to be concerned at these fierce-looking brackets so close to the edge of the path (supporting the Armco)? I would certainly not like to crash into these.”

In response, Michael Dixon, who is Challenge Fund Programme Manager at the council, said: “The bollard is a common installation on shared use paths and shared use foot/cycle bridges.

“It is there to prevent unauthorised vehicles from accessing the viaduct shared use path. The style of the bollard has been used widely in other locations in South Gloucestershire and has a reflective band on it for low light conditions.

“There have not been reports of any difficulties with these bollards in those other locations, often where the path is not as wide as we have provided at Bromley Heath Viaduct.”

He continued: “The road restraint system posts have had plastic caps put on them to prevent injuries and the white line has been laid to alert cyclists and pedestrians of the presence of the posts so they can stay clear of them.

“The whole site will have a stage 3 road safety audit carried out on it and if the audit identifies any issues they will be dealt with.”

He concluded: “I hope I have addressed the points you raised and shown that the Council has considered them in the design, construction and post construction process.”

However, despite the council’s attempt at reassurance, Mr Williams remains concerned over the safety of the infrastructure.

Replying to Mr Dixon, he said: “Firstly I should say that the cycle path is a massive improvement over the previous situation and should be regarded as a success.

“But I raised the query simply because these support posts are so close to the edge of the path and it would be really horrible to catch a pedal on one of them and crash. The yellow caps won’t do anything to soften an impact here or prevent injuries.

“My first reaction on seeing these posts was similar to seeing the Poole bridge – ouch, it looks terrible.

“I realise that it’s not possible to de-risk everything and that cyclists also have a responsibility for their own safety, so should slow down here, but somehow this short stretch needs to be ‘softened’ to minimise the consequences of an impact with the posts.”

Another cyclist, Danny Colyer, wrote: “Several years ago South Gloucestershire Council introduced a policy of always using white bollards, rather than black, on cycle paths, precisely because of the difficulty of seeing black bollards.

“What was the reason for abandoning that policy?  I haven't made it to a cycle forum meeting in a while, but I keep an eye on the minutes and I'm sure I'd have noticed if the forum had been consulted on the change.” 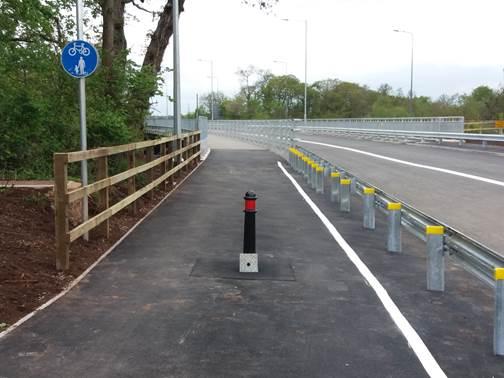 As part of its submission to the government’s cycle safety review, consultation on which closes on 1 June, Cycling UK has urged that national design standards be drawn up for safe and simple cycling infrastructure.

Referring to the Bromley Heath viaduct, Duncan Dollimore, the charity’s head of campaigns, told road.cc: “Judging from the pictures I’ve seen, despite the council’s best intentions to make a safe space for cyclists and walkers, they have actually inadvertently added to the hazards.

“It’s this sort of well-intentioned but dangerous infrastructure Cycling UK is calling for an end to with our campaign, Cycle safety: make it simple.”

He added: “Decent national design standards would mean that councils stop wasting money on infrastructure that is dangerous, and I’d urge everyone who wants to see an end to poorly thought out cycling infrastructure to support our campaign today.”