US manufacturer extends the road range
by Mat Brett

SRAM have launched a blinging new wheel at the top of their aluminium lineup along with new Rival components to boost the gear range.

Weighing in at a claimed 1450g (660g front, 790g rear), the S30 AL Gold is the lightest wheelset that SRAM produce and is very similar to the existing S30 AL Race. The 30mm deep rim is the same hybrid toroidal shape, for example, meaning that the faces of the V-section curve slightly, flaring outward just below the braking surface. This is designed to improve the airflow and increase the speed over a standard rim shape of the same depth.

The S30 AL Gold also comes with the standard S30 AL’s Sapim CX Rays spokes, internal aluminium nipples, and polished finish. It rolls on new high-precision ceramic bearings from Ceramic Speed, gets titanium quick releases, and a new set-screw locking mechanism on the end caps makes for simple preload adjustment. Those end caps are gold, matching the anodizing on the rim graphics and half of the spokes, making for some pimpy looks.

We've no word yet on the price or when the S30 AL Golds will be available.

SRAM have also launched a couple of new products into their Rival groupset, including a wide-ranging 10-speed cassette – the PG 1070 now comes in 11-32T, which is the same range that SRAM are offering in their new Apex groupset. Matched up to a compact double chainset, it’ll give you a broader choice of gear ratios than most triple setups. Plus, a double is lighter, simpler to set up, and quicker to shift through. 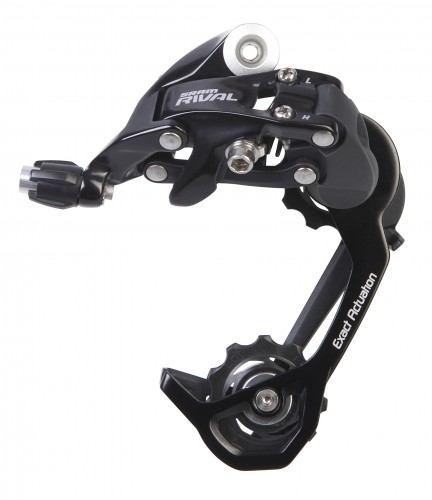 The other new Rival addition is a mid cage rear derailleur option. It uses exactly the same technology as the existing short cage version but it can accommodate the larger spread of gears on the new cassette.