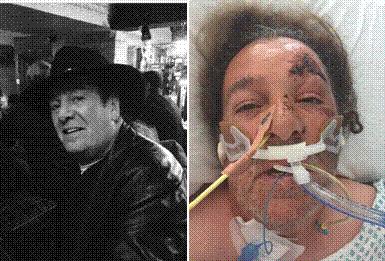 A man who bought a bike outside his local pub was left unable to speak for weeks when he was attacked cycling home.

Colin Flett, 52, bought a bike off a stranger at his local, The Beaten Docket in Cricklewood Broadway, and cycled home later that night.

On his way, he was attacked by three men, and sustained 'life-changing' injuries.

Colin, from Cricklewood, London, remembers nothing of the attack on July 7th.

When the assault was reported to police several days later, Colin was unable to relay any information to them or his family.

His sister told officers that he had been drinking, and while sitting outside the pub he bought a blue Reebok pedal cycle from a man unknown to him.

He left on the cycle, and turned into Skardu Road, where he remembers encountering three men who pushed him off the bike but he cannot remember anything more, police said.

Spinal injuries have meant Colin has had to recover in hospital.

Detective Sergeant Richard Greenwood said: "This was a vicious attack that has left Colin with life-changing injuries, in a very vulnerable state, and has had a devastating effect on his family.

"We would urgently ask any person with information, however inconsequential they may think it is, to come forward and pass this to us directly or via a third party.

"They will be treated in complete confidence."

The men who attacked Colin are all described as being white and aged between 20 to 30.