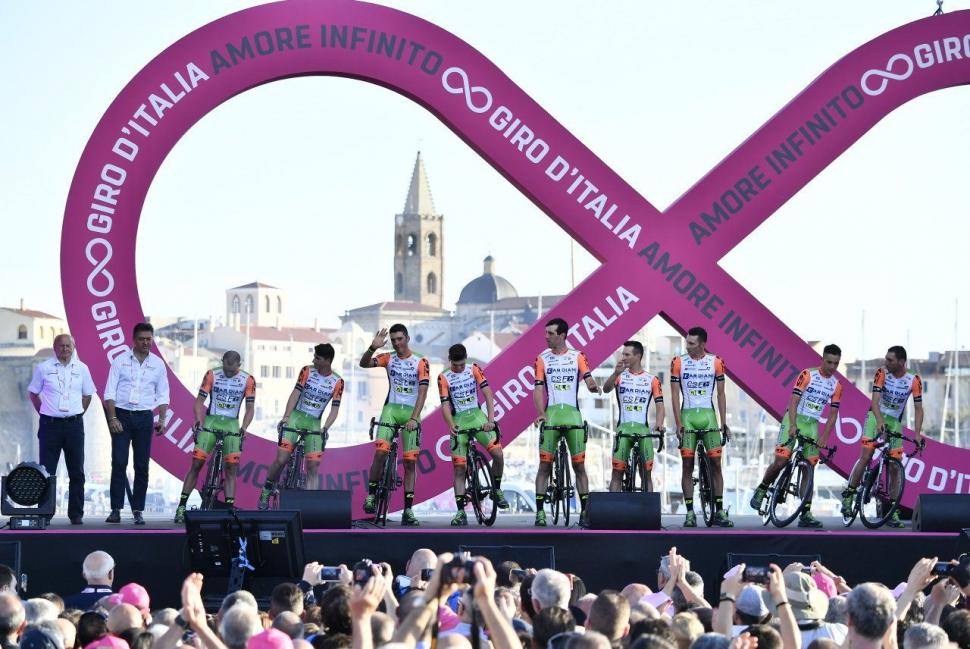 Italian UCI Professional Continental team Bardiani-CSF , given a wild card entry to the 100th edition of the Giro d'Italia which begins on Sardinia tomorrow, faces being thrown out of the race before it has even started with the news this evening that two of its riders have tested positive for performance enhancing drugs.

Both riders were introduced to the public at the Giro d'Italia team presentation in Alghero this evening.

In a statement after news of their positive tests broke, Bardiani-CSF said that it would "immediately throw out both the riders from the Giro d’Italia squad" and "suspend [them] from all the activity of the team, according to UCI regulations."

It added that should the B samples prove positive, the riders would be sacked in accordance with team regulations.

Team managers Bruno and Roberto Reverberi said: “We’re absolutely astounded by the news. We will wait the results of further analysis and we will reaffirm with determination the intention to protect the values of our sport project."

It may already be too late to repair the damage, however. As a UCI Professional Continental squad, Bardiani-CSF relies on the exposure that participating as a wildcard entry to races gives its sponsors, and of those races none is more important to it than the Giro d'Italia.

Under UCI rules, however, two positive tests inside a 12-month period mean it faces a ban from racing of between 15 and 5 days.

It's currently unclear whether that will be invoked immediately, but even if it isn't, there may well be clauses in the team's contracts with its sponsors that will allow them to walk away.

Race organisers RCS Sport said: "Following the provisional suspension of Nicola Ruffoni and Stefano Pirazzi of the Bardiani CSF team by the UCI, the Giro d'Italia race direction reaffirms its full support of the CADF (Cycling Anti-Doping Foundation) in the fight against doping in all its aspects and forms.

"While awaiting the B-sample examinations which will determine the outcome, the Giro d'Italia's race direction and RCS Sport reserves the right to take any appropriate measure to protect the image and the name of the Giro d'Italia."

In a statement, the UCI said:

The Union Cycliste Internationale (UCI) announces that it has notified Italian riders Nicola Ruffoni and Stefano Pirazzi of an Adverse Analytical Finding (AAF) of GH-Releasing Peptides (GHRPs) in samples collected in the scope of out-of-competition controls on 25 and 26 April 2017 respectively.

The riders have the right to request and attend the analysis of the B sample. In accordance with UCI Anti-Doping Rules, the riders have been provisionally suspended until the adjudication of the respective affair.

These constitute the first and second AAFs for members of the UCI Professional Continental Team Bardiani CSF within a twelve-month period. Therefore, article 7.12.1 of the UCI Anti-Doping Rules providing for the suspension of the team from 15 days to 45 days will be applied.

The UCI will refer the matter to the Disciplinary Commission which will render a decision against the team in due course.

At this stage of the procedure, the UCI will not comment any further on any of these matters.