Video: Did a spectator deliberately try to bring down Zdenek Stybar in the velodrome at Paris-Roubaix on Sunday?

Did a spectator deliberately try to bring down Zdenek Stybar as he challenged for the win in the velodrome at Paris-Roubaix on Sunday?

That’s the claim that has been made on the Belgian TV show Extra Time Koers by journalist Karl Vannieuwkerke, who chose the incident as his ‘Moment of the Week.’

He had noticed someone apparently grabbing at the Czech rider as he rode high on the banking ahead of the sprint, the incident taking place around 44 seconds into the above video.

“I don’t know if many people have seen it, but on the track Stybar avoided a cycling tragedy,” said Vannieuwkerke – a reference to the face that while the Quick Step Floors rider appeared to wobble slightly, he did not fall.

"He's over in the corner and there's a man there pulling his arm. Stybar is almost down. I do not know whether it was done on purpose or accidentally, but Stybar is very lucky that he remained upright."

The man in question was wearing a white cap, and can be seen here with his arm outside the advertising hoarding as Stybar passes. 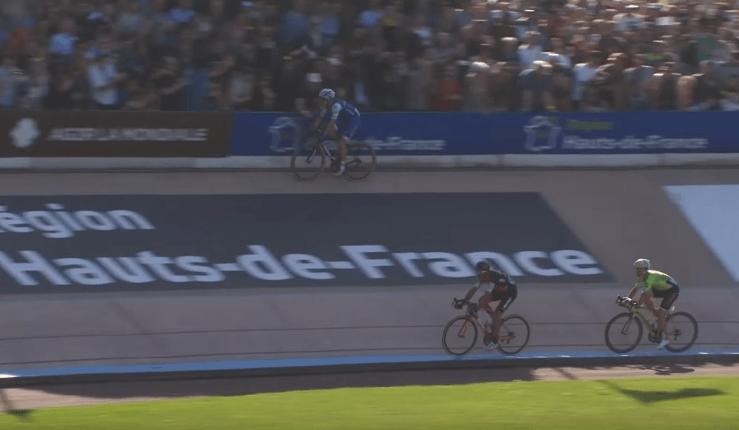 Stybar’s Quick Step Floors team mate Yves Lampaert, who was also on the show, described the action as “deliberate,” and said he was convinced that the rider would have been aware of it.

However, he added that the 31-year-old, who launched his sprint early but was beaten to the line by BMC Racing’s Greg van Avermaet, had not yet said anything about the incident.

The three-time World Cyclo-cross Champion finished second on Sunday, just as he was at Paris-Roubaix in 2015.

On his debut in the race in 2013, he was also caught up in a controversial incident involving a fan when he looked set to challenge for the podium.

Coming to the end of the Carrefour de l’Arbre pavé sector at the head of the race with eventual winner Fabian Cancellara and Sep Vanmarcke, Stybar was suddenly catapulted across the road after he collided a fan who was taking a photo.

While as on Sunday he remained upright, he lost contact with the front pair and eventually finished fifth as Cancellara won.