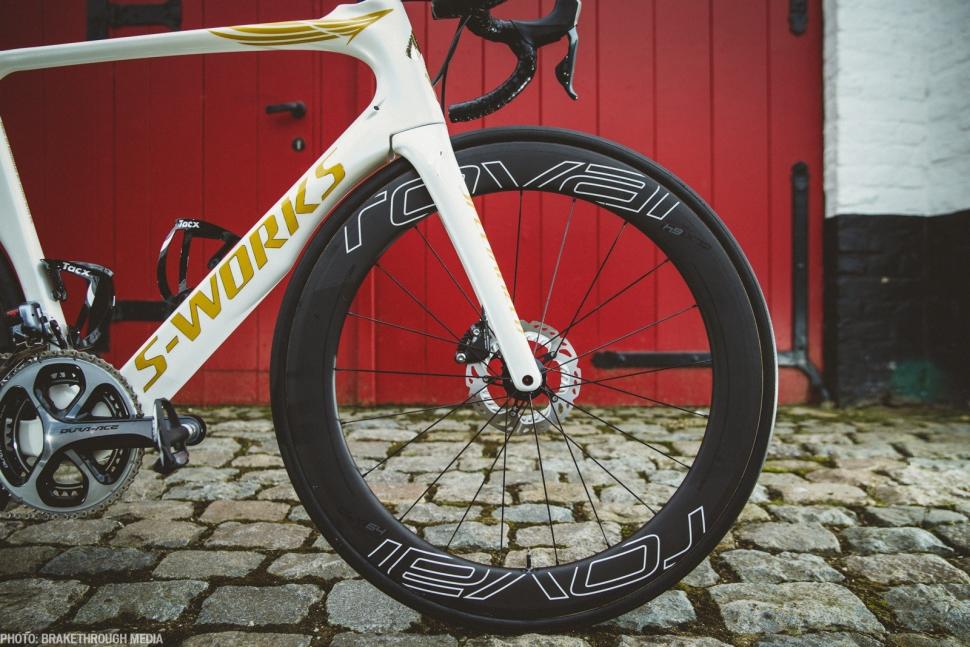 "I can't understand the fuss," says Quick Step Floors rider who has championed the controversional technology...
by Simon_MacMichael

When Tom Boonen, the most high-profile advocate of disc brakes in the peloton, said that he could stop a wheel spinning at 60 kilometres an hour by grabbing the rotor with his hand, Belgian newspaper Het Nieuwsblad decided to put his theory to the test.

The controversial technology has been back in the news this past week after Team Sky’s Owain Doull claimed that his shoe had been sliced open by the disc brake rotor on the bike of Marcel Kittel when the pair crashed on the opening stage of the Abu Dhabi Tour last week, although it’s far from clear that is what damaged the shoe.

Speaking ahead of the Omloop Het Nieuwsblad on Saturday, Boonen said: “I maintain that they are not dangerous. I’ve dared to stop a wheel at 60 kilometres an hour with my hand.

“It’s absurd,” he continued. “Disc brakes seem at the moment to be the biggest problem in the world.”

Boonen added: “I can’t understand the fuss. A crash involving 30 riders with broken legs and arms isn’t news. But one abrasion, allegedly caused by a disc brake, is worldwide news.”

Het Nieuwsblad put Boonen’s theory to the test at the race it sponsors.

Prior to the start, a reporter visited the bus of Belgian UCI Professional Continental team Veranda’s Willems Crelan, also using disc brakes this weekend on its Felt bikes.

A video on the newspaper’s website shows the team’s mechanic, Tim Dejonghe, stopping the wheel at full speed with no injury to his hand.

Concerns remain about the safety of the technology and as we reported yesterday, Lotto-Soudal’s Adam Hansen has accused Specialized – the bike sponsor of Quick Step Floors – of trying to rush it into the peloton.

He also noted claimed that Boonen, who rides his final race at Paris-Roubaix in April,  had changed his tune over disc brakes.